Following the death of her husband Henry Partridge Fry in England in 1881, Edith Horatia corresponded with her brother John (‘Jack’) Partridge of ‘White Rocks’, Brunswick Junction and made the decision to immigrate with her four children – Alice Horatia, Stephen Henry, John Gurney and Henry Philip. Edith’s brother John purchased on her behalf the original parcel of land in 1893 and arranged to have a house build prior to her arrival in October 1894. The property was named ‘Shenfield’ after the property where Edith and Henry had lived on the outskirts of Brentwood, Essex, England.

The house was designed by architect Russell Hobbs (later Sir). It was originally to be built of wood but John Partridge decided to have it made of brick with an iron roof and verandahs all around the main building, for the tender price of £489/10/-. With extras, the sum total was £520/12/3. The bricks were made on-site. 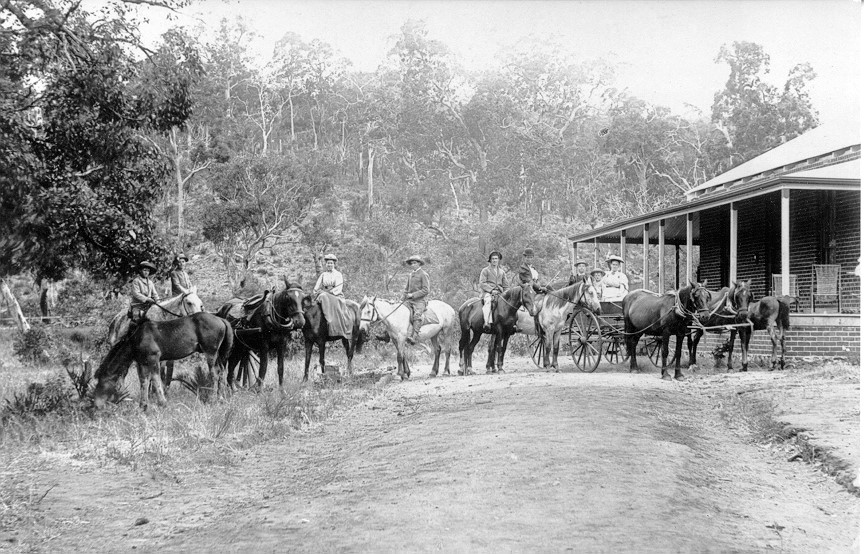 The house consisted of two buildings – a separate kitchen building and the main living area of the house. The main building consisted of six rooms. The kitchen building consisted of the kitchen and a storeroom. The store room was always referred to as the dairy as it was where the cream was separated and butter churned. These two buildings were later joined by a lean-to breezeway. On the south side of the kitchen, a schoolroom constructed of weatherboards with a brick chimney and fireplace was added circa 1912. This was where the older Fry children were taught by a governess prior to the Benger School being opened in 1918. The schoolroom was then used as a dining room.

In 2000 – 01 the kitchen was modernised and expanded incorporating the adjoining store room. The laundry was replaced and enclosed incorporating a shower and toilet. The breezeway was rebuilt to improve the ceiling/roofline and replace the rotted floor boards. The bathroom, dressing room and toilet at the end of the breezeway were also demolished. A new bathroom and toilet were constructed in the small bedroom located on the northern side of the house. A new garage and storeroom were also built to replace the old asbestos garage to the south of the school dining room.

Initially the farm was utilised for mixed farming which included: dairy pigs sheep chaff orchard – oranges to Kalgoorlie and apricots (some of which were sent to the Nuns at Collie) potatoes – seed spuds vegetables – these were grown for personal consumption but it is unknown whether they were sold commercially.

The emphasis changed so that beef and seed potato production dominated. Potatoes were grown commercially until 1972. Two crops per year were grown – a summer crop in the Benger Swamp and a winter crop on the hills. The hill crop was planted using draft horses and a single and a double moldboard plough. This method was used until planting ceased in 1972. Potato production ceased due to the difficulty in obtaining workers and the amount of chemicals needed in their production.

Between 1998-99 and 2002 the flat land, generally between the South Western Highway and the foothills, was mined for ilmenite by Cable Sands. Rehabilitation of the land commenced in 2002 and is not yet completed (March 2007).

Following his marriage in 1905 to Mabel Mitchell, Stephen H Fry remained on ‘Shenfield’. His mother Edith and her other sons, John and Phil, bought and moved to ‘Crendon’ in Donnybrook in 1904.

Stephen, together with his sons William (‘Bill’) and Paul, farmed the ‘Shenfield’ property until his death in 1958. The remaining sons and daughters had either married and/or moved away to pursue their careers. Paul and Bill continued farming together and were later joined by two of Bill’s children, Kay and Max, who continue farming to this day.