Ask any Harvey District old-timer about picnics or holidays at Myalup Beach. They all have a yarn to spin; how they maneuvered the impassable track from the Old Coast Road by horse and cart, or rode over Lake Preston sand ridge at No. 1 Spit to Paradise Beach for a summer camp, leading their milk supply – the family cow.

During the summer months before European settlement, the Nyungar Ganeang Tribe wandered on the eastern shores of freshwater Lake Josephine. Rumour has it that the western side of the lake was taboo. More likely they preferred the fertile accessible areas around the estuary and the hills of Harvey.

George Venables of Harvey, who once farmed alongside Lake Preston, found traces of old aboriginal burial grounds. He remembers his mother, Mary Venables (nee Piggott), telling him she had seen the aborigines fire their dead in Christmas trees when the ground was too hard to dig in summer.

In January 1839 Captain George Grey travelled to Myalup Beach in search of George Eliot, Resident Magistrate of Bunbury, lost on a return journey to Bunbury. Although he did not find Eliot, Grey had the distinction of being the first European to stand on what is now Myalup Beach town site.

Early records of Myalup, or Myarlup as it was known in 1846, refer to land around Myalup Swamp, south east of the Old Coast Road and farmed principally by the Crampton and later the Manning families.

Just east of Lake Josephine, past the paperbark-studded swamp near some old fig trees, are two water wells, one boarded up. Close by, a series of grass mounds and scattered stones mark all that remains of ‘Stone House’. Built in the latter half of the nineteenth century, it stood close to the old track (which can still be seen) and first belonged to Polly Piggott. The cottage was later owned by Arthur and Nellie Jones. The Jones’s had eight hardy daughters and Mary Venables recalls in her oral memories, ‘We never thought anything of setting into the swamp in mid-winter to get across to the other side, if it meant saving a long walk, perhaps to catch a horse. Many a time I’ve seen the Joneses and there were quite a few at Myalup, in dead of winter up to their chins in water.’ Mosquitoes, sandflies, tiger snakes and quicksand were other hazards these robust settlers had to contend with.

In the 1920s Mrs Roesner of Harvey used a tin shack known as Mrs Roesner’s Tea Rooms, situated on the site of the current shop, to cater for special functions such as surf lifesaving and sports days at Myalup Beach.

‘Stone House’, deserted at the beginning of the depression in 1930, because the paymaster’s office for the surrounding ‘tent city’ of 1000 sustenance workers, employed in digging the 23 kilometre canal from Harvey to Myalup to alleviate flooding of the coastal plain and open up more land. So that digging could be shared among as many men as possible, single men of ‘Stone House Camp’ were only allowed to work two days a week. After money was taken out of their pay for tent hire, food, and a hospital and medical fund they earned a mere 12/6d a day. To supplement their diet and fill the enforced leisure hours many workers spent time fishing at Myalup Beach.

The Diversion was completed in 1934 and a memorial plaque facing Myalup Beach Road (at the corner of the playground on Old Coast Road) is dedicated to those who laboured under such difficult and hopeless conditions.

Ron Upton remembers a long and hazardous drive around Lake Preston in 1938. Banks were littered with cattle bones and carcasses, the hapless victims of swamps and quicksands. Ron recalls that in winter the road to Myalup Beach was flooded and impassable. Asked what he considers to be the principle difference between Myalup now and then he states unequivocally ‘accessibility’.

During the Second World War a small contingent of regular army coast guards policed the lookouts dotted in dunes along Myalup Beach but not many others visited the remote beach during this time.

In 1950 John and Betty Callegari built a beachside kiosk from old pine packing cases on the site of the current public ablution block. They sold sandwiches, cakes and freshly hand-churned ice-cream for 3d a cone. Many a young farmer was inveigled into turning the handle for the price of an ice-cream. 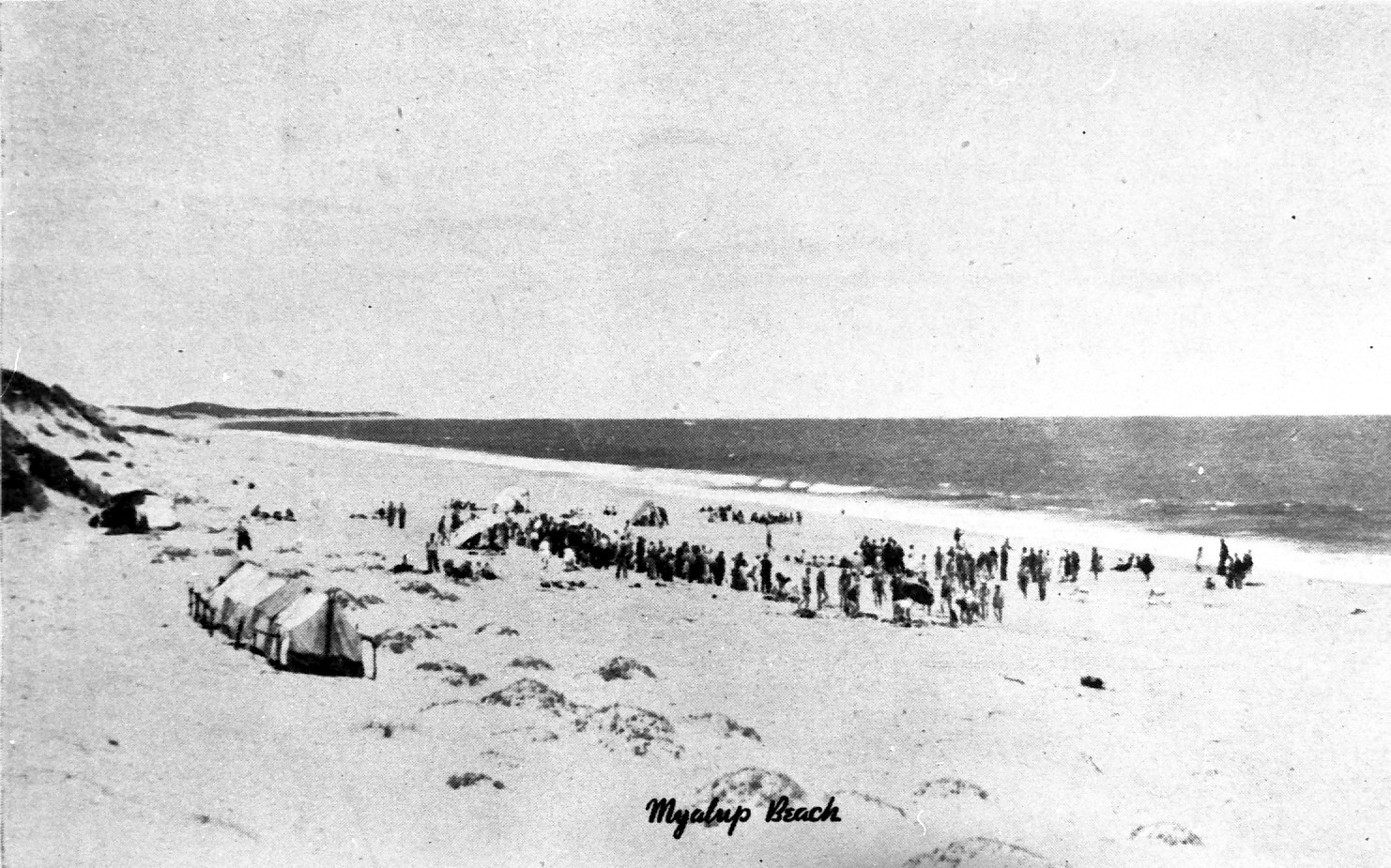 Residential plans came to fruition in 1952 and there was a big demand for blocks auctioned at the Harvey Shire Office. John and Betty graduated from their kiosk and bought the site of Mrs Roesner’s Tea Rooms. The block cost £45. After making their own bricks in Harvey, they built the shop and managed the caravan park, opening at weekends and during the summer months from 1961 until 1968. John also acted as Honorary Ranger.

On the 3 January 1970 the Myalup Progress Association held its inaugural meeting and Tom Ottrey was elected President. The Association’s principle aim was to have electricity connected to the town but it was not until 15 May 1972 that their objective was realised. At the time there were 23 permanent residents.

Two events are remembered which threatened the town; in 1974 a fire raged through the paperbark grove on Myalup Beach Road, temporarily closing off access, and in 1978 Cyclone Alby struck. Neither caused any major damage.

Harvey residents continued to visit Myalup regularly in summer and many built weekend shacks. Large communal fish barbecues were held adjacent to the caravan park. Fishermen welcomed the black clouds of whitebait which swept along the water in January, bringing with them a prolific supply of juicy tailor.

During this period, hang-gliders discovered the long and secluded stretch of white sand edged with high sand dunes. On fine balmy days coloured canopies could be spotted hanging high over the beach. Tragedy struck in 1972 when a glider was swept behind the dunes and killed. The small community made a collection for the bereaved young widow and her children.

For much of the 1980s Myalup Town and Beach remained a well-kept local secret, a small sleepy hollow and a fishing fanatic’s mecca. The town grew very slowly as residents from Harvey moved in to enjoy the tranquil lifestyle. Myalup Progress Association continued to act as a community watch dog and persuaded the Shire to upgrade and allocate a recreation area. It was also instrumental in preventing the dumping of toxic waste, north along the coast, which would have contaminated the underground water supply. In 1984 fire again threatened and enclosed the town. This time it came closer and residents in Reading Road were evacuated.

Unfortunately, according to many locals, this little bijou by the sea is no longer a well-kept secret. City slickers are moving in and development is now the buzz word. Fortunately strict environmental controls make this difficult. Today Myalup remains relatively unspoilt with a permanent population of 65, as well as regular ‘weekenders’. For the casual visitor, caravan and camping accommodation is available in a delightful setting nestled in and around the hills close to the beach.

The shop has extended its service and is open daily all year round 7am – 7pm. It not only sells groceries, fresh fruit and bread, delicious hot and cold snacks, but everything from fish hooks to footballs. Bookings may also be made for the community tennis court on Reading Road.

Water ski facilities, run by Bunbury Ski Club, are available on the lake. For those less energetic but adventurous, a stroll or jog along the lake, skirted by Yalgoorup National Park, may lead to an encounter with small grey kangaroos or possibly an emu. Nature lovers will appreciate the vast range of colourful native shrubs and trees, host to a prolific and wide range of birdlife. And of course, there is always fishing from a seemingly endless stretch of pale gold sand…