From modest beginnings, this iconic business has helped transform the small rural town of Harvey into a prosperous centre engaged in the production and processing of world-class beef.

Ernest George Green was the grandson of Levi Green, a farmer who came to the colony of Western Australia in 1843 and settled in the Pinjarra area. Ernest was born in Pinjarra in 1888, the son of William, a railway employee and Kezia neé Jones. Prior to 1909 when Ernest came to Harvey as a clearing contractor he was a stockman at a station in the Onslow area.

In 1919 Ernest and his wife Mary Emily neé Collins opened a butcher’s shop in Harvey. For the first 25 years, the business employed a staff of two and slaughtered a handful of cattle each week. In 1925 meat was supplied to Harvey, Yarloop and Mornington Mills. Two retail outlets were opened in Bunbury and one in Yarloop in 1943 as well as meat being supplied to Collie.

In 1945 Ernest George Green, master butcher and grazier, died suddenly from heart disease at the age of 56 years, leaving behind the foundations of what was to become the biggest meat processing works in WA. His death not only shocked the residents of Harvey, but also the wider WA community, with many mourning the loss of this former well-known horse breeder, who was a foundation member and strong supporter of the local Harvey trotting club.

Following his father’s death, eldest son Malcolm Ernest Green took over the business and formed the family company known as EG Green and Sons Pty Ltd, with the younger son Colin in charge of stock purchase and transport activities. Mal’s sister, Alma Pilkington also sat on the Board of Directors and was the secretary.

L-R Colin and Mal Green at the Brunswick Sale Yards

The company continued to grow and thrive under the family, who were committed to perpetuating their parents’ legacy and the ongoing welfare of the town of Harvey. In 1959 EG Green & Sons Pty Ltd was granted an export license, although they did not commence the export of meat overseas until late 1960s / early 1970s. They sold their meat through Australian Agents. To fully exploit this opportunity and set up an export business, Mal Green and his wife Mary Emily (‘Curly’) moved to Perth. Mal made weekly trips back to Harvey to oversee the business. 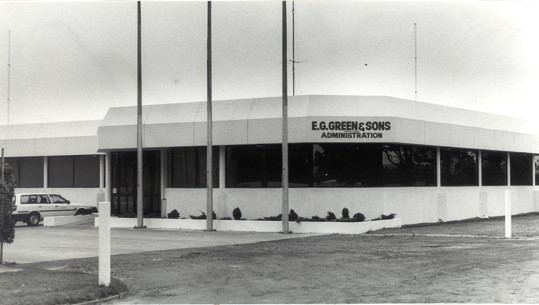 As Harvey Beef thrived, the company branched out further into land and property, horse breeding and pastoral activities. The Harvey abattoir located on the 190 hectare site known as ‘Balmoral’ was supported by three other properties within 20 kms of the works (‘Midway’, ‘Lakeside’ and ‘Northside/Southside’). They mostly stocked Shorthorn and Hereford cattle as well as fat lambs on the Harvey farms. EG Green & Sons Pty Ltd eventually held five pastoral leases in the North West of the State (‘Alice Downs’, ‘Mabel Downs’, ‘Lissadell’, ‘Springvale’ & ‘Texas Downs’), covering a million hectares and selectively breeding beef cattle, particularly Brahmans, a breed well suited to the harsh conditions of the East Kimberley. They owned Balmoral Skins & Hides in Fremantle where they handled the daily supply of skins and the sale and export of leather.

Mal Green retired in 1980 and died in Perth in 1983. At the time of his funeral, his ongoing commitment to his workers and the town of Harvey was acknowledged. His brother Colin then became Chairman. In the year 2000 both Colin and his sister Alma died, so the next generation of the Green family took over the running of EG Green and Sons Pty Ltd, with Mal’s son Peter as Chairman of the Operating Division and Colin’s son Alan as Chairman of the Group Holding Co.

Over the years, the town of Harvey itself and many charities benefitted from the generosity of EG Green & Sons, whose Corporate Golf Day in 2004 donated its profit to the Children’s Leukaemia and Cancer Research Foundation. But the good times were coming to an end. The company was facing difficulties in servicing its debts and the meat industry was facing a recession.

In an attempt to rationalise the business, its Kimberley pastoral stations were placed on the market, with five stations in its Balmoral Group, which together stocked 40,000 head of Brahman cattle, put up for sale in late 2002.[1]

Causes for the downturn were said to be drought, the influx of cheap meat imports, livestock shipping and a changing market place. There was a call for mediation and management changes within the family. Staff changes took place in all areas of the business and the close-knit Harvey community suffered, as long-term employees were made redundant.

In 2005, in an effort to save the situation, the various companies connected with EG Green & Sons Pty Ltd entered a Deed of Company Arrangement, aimed at bringing their assets into line and reducing costs.

Harvey Beef continued to operate with reduced staff numbers. However, there were ongoing signs that EG Green & Sons was in trouble. A large amount of capital had been borrowed in order to finance the upgrading of its facilities.

In August 2005 the company announced the closure of its processing plant for two weeks, with over 500 people thrown out of work. The viability of farmers and other businesses around Harvey was under threat. In February 2006 the company went into administration, and, with up to 90% of WA’s beef exports coming from EG Green’s (now known as Harvey Beef) processing plants, the State’s beef industry was thrown into crisis.

In September of that year the WA Government, under pressure to keep the business operating and the struggling town of Harvey viable through the financial crisis, provided a grant of $1.55 million to assist workers to re-train or re-locate to new jobs, as well as a $1.8 million short-term loan to the Administrator, to ensure payment of workers’ entitlements.

At the end of September 2005 the company was thrown a lifeline by its biggest creditor Elders, who, in order to keep up the supply of cattle to its Asian feedlots, provided $20 million to prevent the National Bank from liquidating the Company.[2]

The South Australian Company of T&R Pastoral Group purchased the Lake Road (Mandurah) Abattoir called ‘Nebru’, which Harvey Beef had purchased. The closure of the Kings Choice operation, also owned by Harvey Beef, was aimed at bringing their assets into line and reducing costs.

In April 2006, Stark Investments and Harmony Capital took over the troubled business, under the new name Harvey Industries, with the stated aim of raising its output by 50%.[3]

Following the takeover, Harvey Beef’s newly appointed Chief Executive Mark Spurr warned of challenging times ahead, citing a high Australian dollar, the re-entry of the US into Korean markets and a chronic shortage of skilled workers as major hurdles. A recruitment drive in New Zealand had some success.[4]

Soon after, Elders joined the partnership in June 2006, buying 20% of Harvey Beef. This announcement followed Elders signing a deal to supply Australian breeding cattle to Russia, with 3,500 cattle bound for Vladivostock that year.[5]

In June 2009 the Cayman Islands-based company Harmony Capital bought out the other partners, with Mike Jackson taking over as Chief Executive.[6]

The merry-go-round of ownership continued when former major shareholder, Pacific Alliance Group (Singapore) bought out Harmony in 2012, once again leading to a prediction of an exciting future for Harvey Beef.[7]

Yet by 2014, the financial collapse of Harvey Beef was once more on the cards. Again on the market, pork processing company Craig Mostyn looked to be the likely buyer, with competition from Asian interests.

However, a surprise bid of around $45 million by mining billionaire Andrew ‘Twiggy’ Forrest through his Minderoo Group brought the company back into local ownership, news that was welcomed across the State. The purchase has generated a renewed sense of optimism into the livestock industry, and also into the people of Harvey, in the hope that the troubled times are behind them.

At the time, new manager Wayne Shaw cited the lack of investment in plant and equipment under the previous ownership as the main cause of its problems, stating that Harvey Beef could need an initial injection of $20 million to upgrade the ageing facilities at the abattoir, which employs about 300 people and processes around 145,000 cattle. He expressed optimism that a new deal to supply beef to Malaysia, as well as the development of new product ranges, would result in sustainable returns to farmers in the future.[8]