Today, many people pass the memorial on the Old Coast Road during their daily walks or commute to work or study. Others – tourists to Australind – stop their vehicles and pull off the busy road to explore the memorial and enjoy the view. Like all memorials, it grew from an idea, took longer than hoped to build and was finally unveiled with fanfare in 1938. 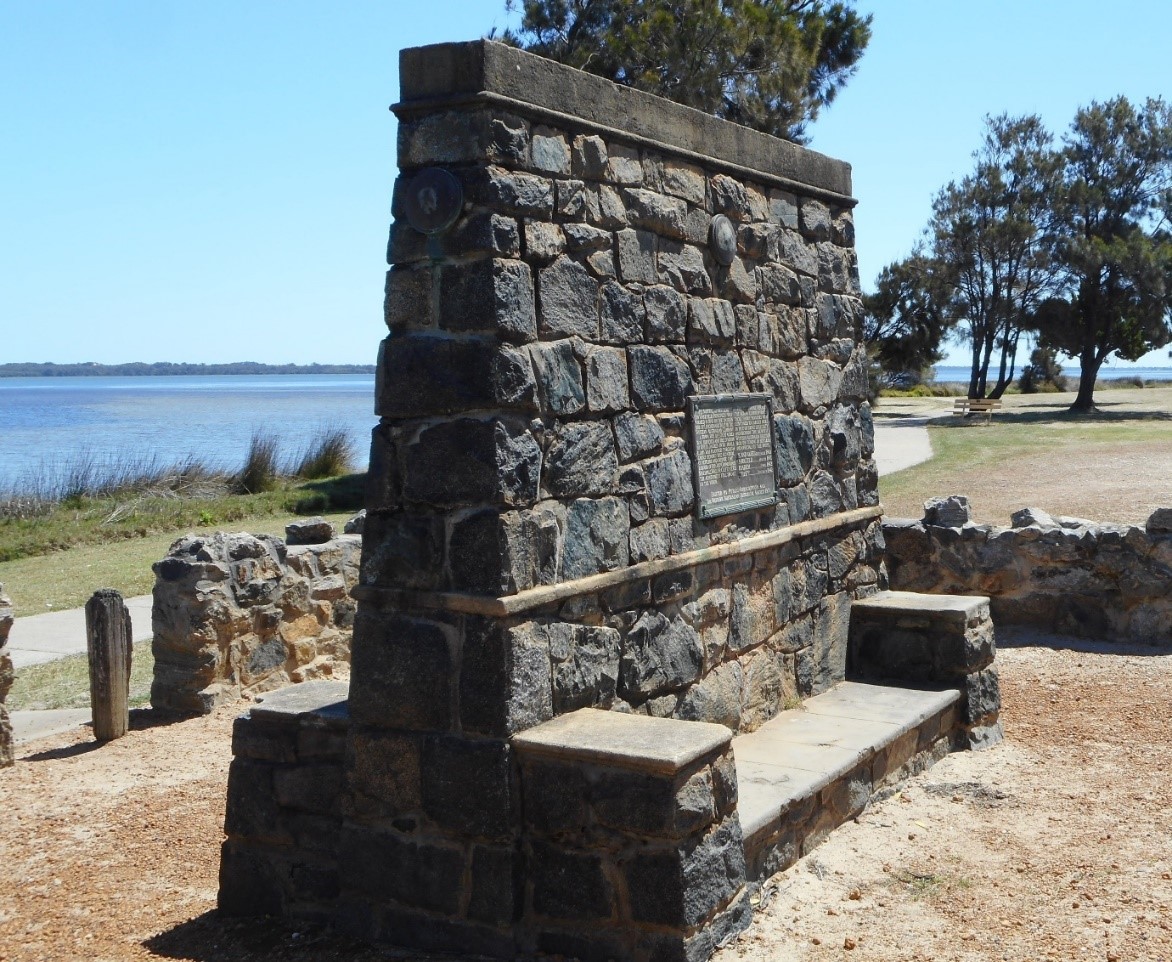 As part of the Bunbury’s celebration of Western Australia’s Centenary held on 9 November 1929, the Brunswick Farmers’ Association had an exhibit showcasing the principal industries of the district. The Association was also gauging interest in a memorial at Australind and had a positive response whenever the subject was raised. Although nothing definite was decided there was a proposal for the memorial to be in the form of a rest house built on the original site of the settlement.[1]

At the Bunbury Centennial Committee held in early December, Arthur E Clifton (also a member of the Brunswick Farmers’ Association) raised his concern that after the excitement of the centennial celebrations throughout the State that, unless a memorial was erected to mark the centennial year, it would soon be forgotten. He spoke about the proposed memorial and site at Australind. He did not want to ask the committee for funds but rather to approach descendants of the old settlers and ask each of those families to commit to a certain amount as there were many who would like to help commemorate the pioneers of the district, and many of the younger generation were flourishing. He thought that the different branches of the Clifton family would provide a sum of £25 towards the fund, that descendants of old settlers would contribute and there would be no difficulty in raising the £500. Cr Higgins thought it would be a fitting conclusion to the centenary celebrations and would provide a permanent memorial to the State. Mr Trotter who had visited the Eastern States the previous year had been impressed with the various memorials he saw on his travels and thought they would be of interest to people in later years.

Arthur Clifton said that ‘Some people regarded the Australind settlement as a failure, but it must be remembered that they did not come to found a township at Australind, but to develop Wellington Location 1, a tract of 100,000 acres, and in that they were successful. The value of Wellington Location 1 was, today possibly £1,000,000. The Australind settlement was the first form of group settlement and, far from being a failure, it had proved a wonderful success. The early families had not deserted their holdings and their descendants were today on the same land.’[2]

As a memorial in Bunbury a children’s playground was proposed. Mr Trotter had seen an excellent playground in Port Pirie, South Australia where 1300 men turned 10 acres of waste ground into a wonderful park in one day.

Mr Gillett offered the services of the RSL if the Council made land available.

Both memorials were left in the hands of a committee consisting of the Mayor, Mr JE Hands, Mr CR Gillett, President of the Bunbury RSL and Messrs George E Clarke, AE Clifton, Sherlock and Trotter, who had power to add to their number.[3] The balance of the remaining centennial funds was to be used in connection with the children’s playground.

By late March 1930 the Committee had posted letters and circulars to people living interstate, intrastate and Great Britain. It was hoped to have the work completed by the coming Spring. The promises of support had been encouraging but they were still seeking subscriptions which could be sent to the organiser and secretary, Mr Arthur E Clifton of Brunswick.[4] A month later a subscription had been received from Sir Newton Moore, whose father had come as a child to Australind on the Diadem and Mrs GR Wheeler who left Australind 35 years ago to live in England.[5]

In response to the ‘Notes & Comments’ column in the Sunday Times of September 1930 Arthur Clifton refuted the claim that ‘£20,000 was frittered away on alleged centenary celebrations without a lasting memorial of a notable event in the history of WA.’ He pointed out that the Bunbury Centennial Committee was working hard on such a memorial but they were having to mark time as the State was short of funds and it wasn’t thought fair to ask people in need. Several subscriptions had been forwarded from England but little cash collected. He encouraged anyone who could afford to donate to do so and to spread the word by circulating the article.[6]

In June 1936 interested people in Bunbury and the Western Australian Historical Society (WAHS) were considering the possibility of celebrating Bunbury’s centenary in December of that year. The Memorials Committee of WAHS had taken over the administration of the Australind memorial fund. Although Arthur Clifton suggested that it might be possible to join the Australind memorial with the proposed Bunbury centenary celebrations, the Society recommended ‘that the Australind commemoration should be dealt with separately, as it was considered that the separate identity of the two establishments should be kept.’[7]

A year later the WAHS Memorials Committee appealed for funds to commemorate the Australind settlement, augmenting the £15 the secretary had received from various sources as a nucleus of a fund. At this stage no decision had been made regarding the form of the memorial, as it would depend on funds raised but it would be situated at Australind.[8] The Memorials Committee was liaising with Edmund Clifton to complete arrangements for the erection of the proposed memorial. Edmund Clifton had presented a paper to WAHS on the founding of Australind which was published in the first journal of the Society. [Although the paper had been presented to the Society ten years previously, Early Days was first published in 1937.]

By December 1937 a handsome double-seated structure had been designed on behalf of the WAHS. A considerable sum had been raised towards the cost but donations were still being sought to enable it to be erected early in the following year. The design was described as ‘two seats mounted on a pavement, 11 feet by 8 feet. The seats are face to face and between them is a block of masonry on top of which is a tablet showing the lay-out of the garden city of Australind as planned.’[9]

Three months later Mr FI Bray,[10] Chairman of the Memorials Committee, said that there had been a gratifying response and sufficient money had been raised to have a design prepared, that the fund would soon be closed and urged anyone wishing to donate to do so. Although a garden seat type of memorial was proposed, it was not a final decision and it was possible that another design would be selected.

Ten pounds had been made available by the Executors of the late Sir Newton Moore and about £80 raised publically. Practically all of the funds would be spent on the erection of the memorial, as the stone for the work had been given by the Public Works Department. The memorial was designed by the Society’s honorary architect, Mr Marshall Clifton,[11] a descendant of the Australind pioneers.

In mid-August 1938, Mr JF Lee of North Dandalup was declared the successful tenderer. ‘Two bronze plates, prepared by the Cumpston Engraving Works [of Perth], would be attached to the memorial (a handsome stone seat), one to contain a suitable inscription and the other a plan of the intended township.’[12] 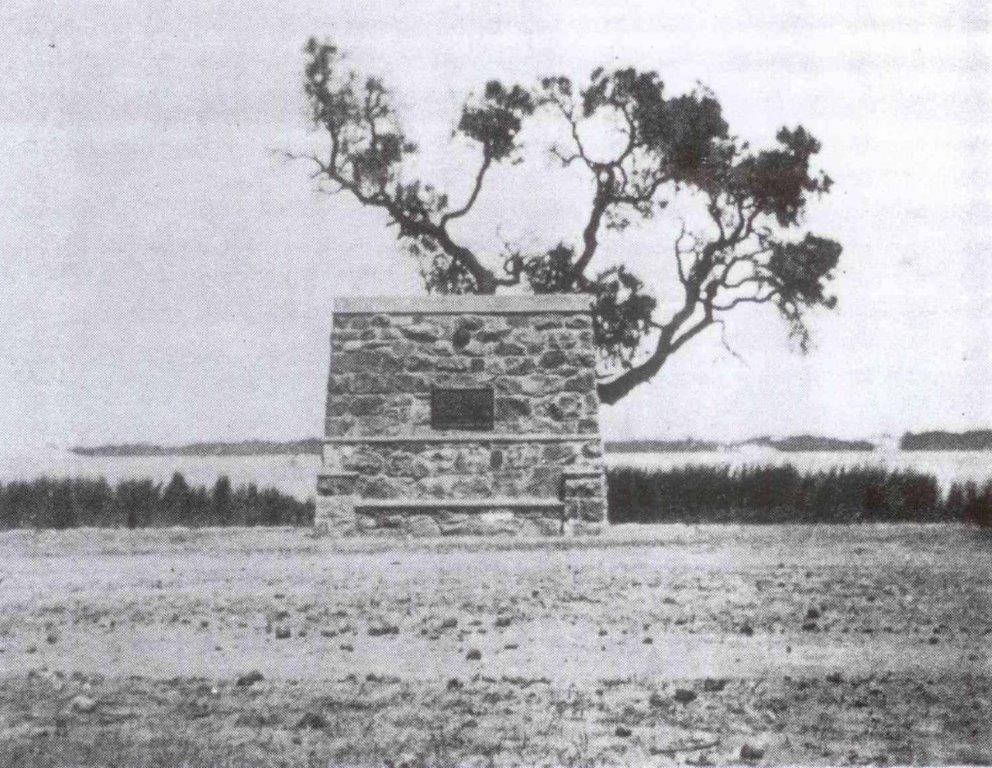 The Australind Memorial taken on the day of the unveiling by EK Clifton.[13]

The official opening, open to the public, was held on Saturday 3 December 1938 and commenced at 3 pm.

The wording on the roadside plaque reads:

‘The Australind Settlement (on Wakefield Principles) was formed in 1841 on the eastern side of Leschenault Inlet by the Western Australian Company. A town site of 1,000 acres was surveyed and the division of 100,000 acres into small farms was planned. Through causes beyond the control of settlers and despite the labours of the Chief Commissioner Marshall Waller Clifton, F.R.S., the achievement fell short of the vision.

This Memorial recalls the vision, commemorates those hardy pioneers who continued to labour here in face of great difficulty and records the benefit Western Australia received from the coming of settlers and officials in the ships.

Erected by public subscription and The Western Australian Historical Society 1938.’

The plaque on the estuary side has a map of the intended town with: 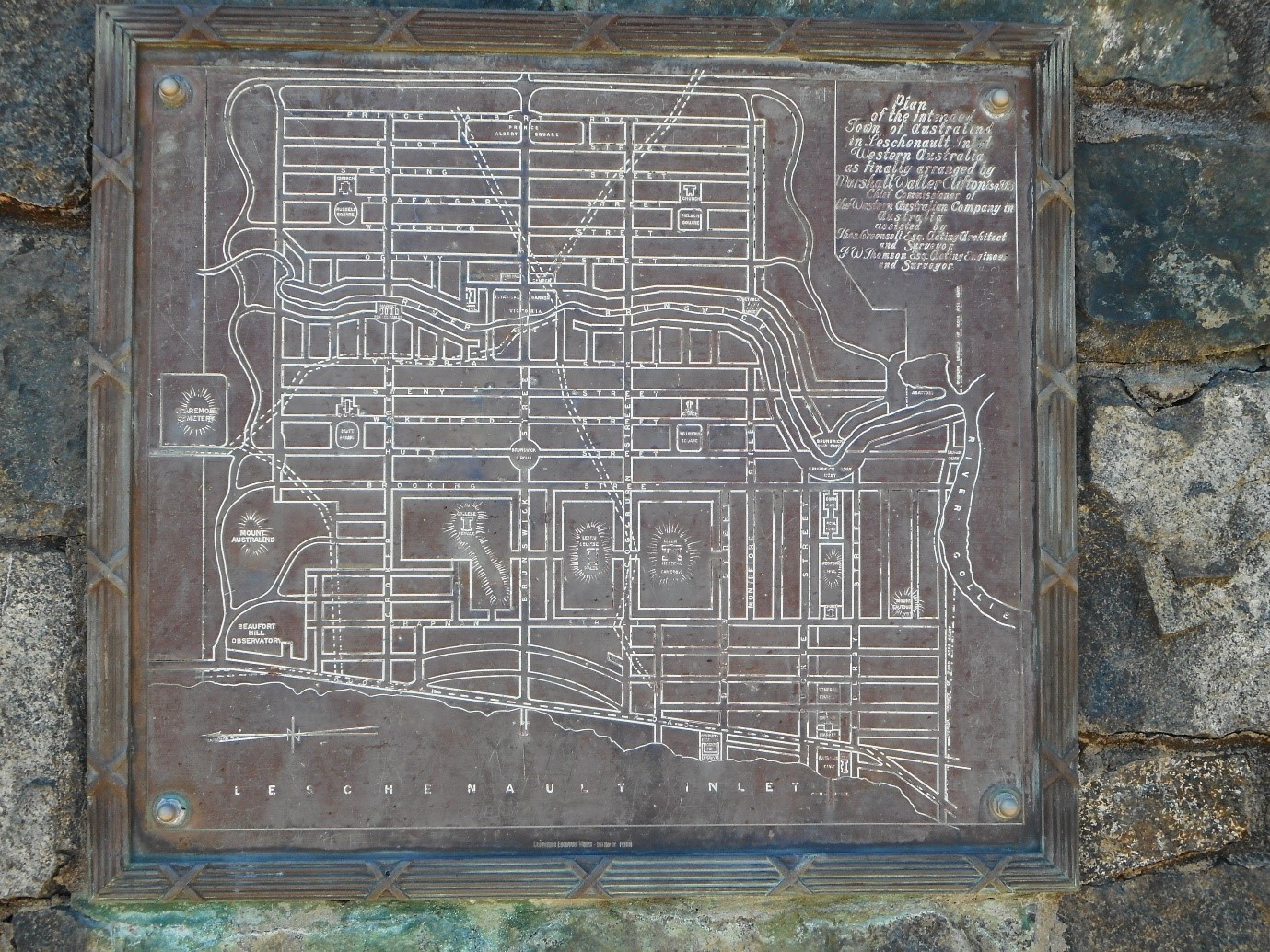 Only two months later, vandals threw bottles at the memorial and broken glass was found at the foot of the seat. The WAHS Memorials Committee decided to place a 2 feet 9 inches high wall around the memorial to protect it from straying stock. The Bunbury Road Board approved the addition as long as it didn’t extend to the road and be dangerous to traffic.

The memorial was again vandalised in 1949. It had been used for target practice and had about 217 bullet marks, apparently made by a .22 which scarred the map of the proposed town. Police warned that if the culprits were caught, heavy charges would be laid.

In the intervening years, the memorial was a lonely sentinel on the shores of the estuary, reminding people where a thriving town had been planned. Not until the 1970s did the proposed plans of the WA Company and hopes of its settlers show the promise that had been envisaged. Today Australind/Leschenault has a population of over 18,000 and continues to grow, mainly as a satellite suburb of Bunbury and with a productive hinterland.

Directly opposite the memorial is the Pioneer Memorial Park on land donated by Emily Clifton. 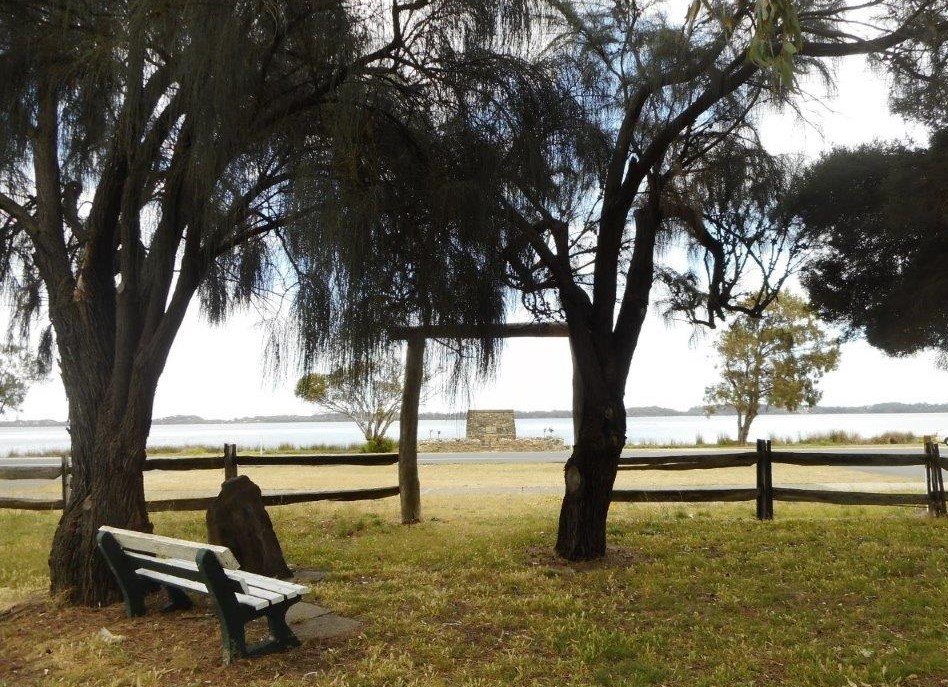 In the left foreground is a stone with a plaque attached, as shown below. 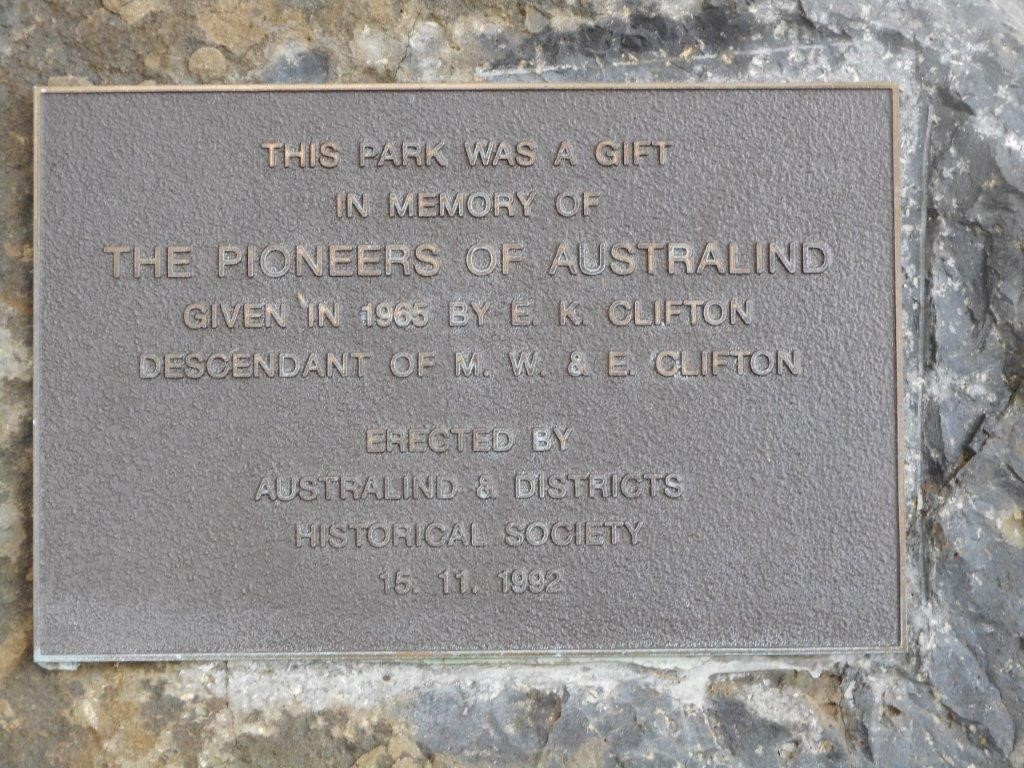 [10] Francis Illingworth Bray was born in Bunbury and educated in Perth. He joined the Premier’s Office in 1896 and worked as a junior assistant to John Forrest. He later became the Commissioner of Native Affairs.