In the early twentieth century, the WA Government was still struggling to meet the demands of many parents for basic education for their children. This applied not only to those in remote parts of the State, but also to families living in agricultural areas of the South West. State Schools, many of the one-teacher variety, were provided where an average attendance of ten children could be maintained, but for many families the problems faced in getting their children to school were immense. Attendance was compulsory for children between the ages of 9 and 14 years living within three miles of a school, or two miles for those aged between 6 and 9 years.

Even these distances were difficult for children who had to walk long distances along poorly maintained roads, through the bush or across paddocks, regardless of weather conditions, to the nearest school. For families living further from the school, parents had the option of supervising correspondence lessons, otherwise their children often had no education at all. Hardworking mothers found it difficult to find time to tutor their children, and many did not have the necessary literacy skills to do so.

The Education Department was doing its best to meet the needs of families who lived beyond the radius of the compulsory area. It introduced a different class of school, known as ‘Sparsely Populated District Schools’ (SPD), whereby parents living in sparsely-settled areas could apply to the Department for provision of a teacher, provided that they met part of the salary costs, and could offer board and lodging. Due to a scarcity of available teachers, parents were often required to find suitable instructors themselves, submitting their names to the Department for approval.[1] Since the pay levels were lower than for State School teachers, it was difficult to find and retain teachers willing to live under such conditions.

There is a record of a failed attempt to establish an SPD School at ‘Rosamel’ in Australind by Beatrice Clifton, wife of Francis Maitland Clifton. She wrote to the Head of the Education Department on 1 May 1914, asking if there was any way that the people of the district could acquire the services of a teacher: 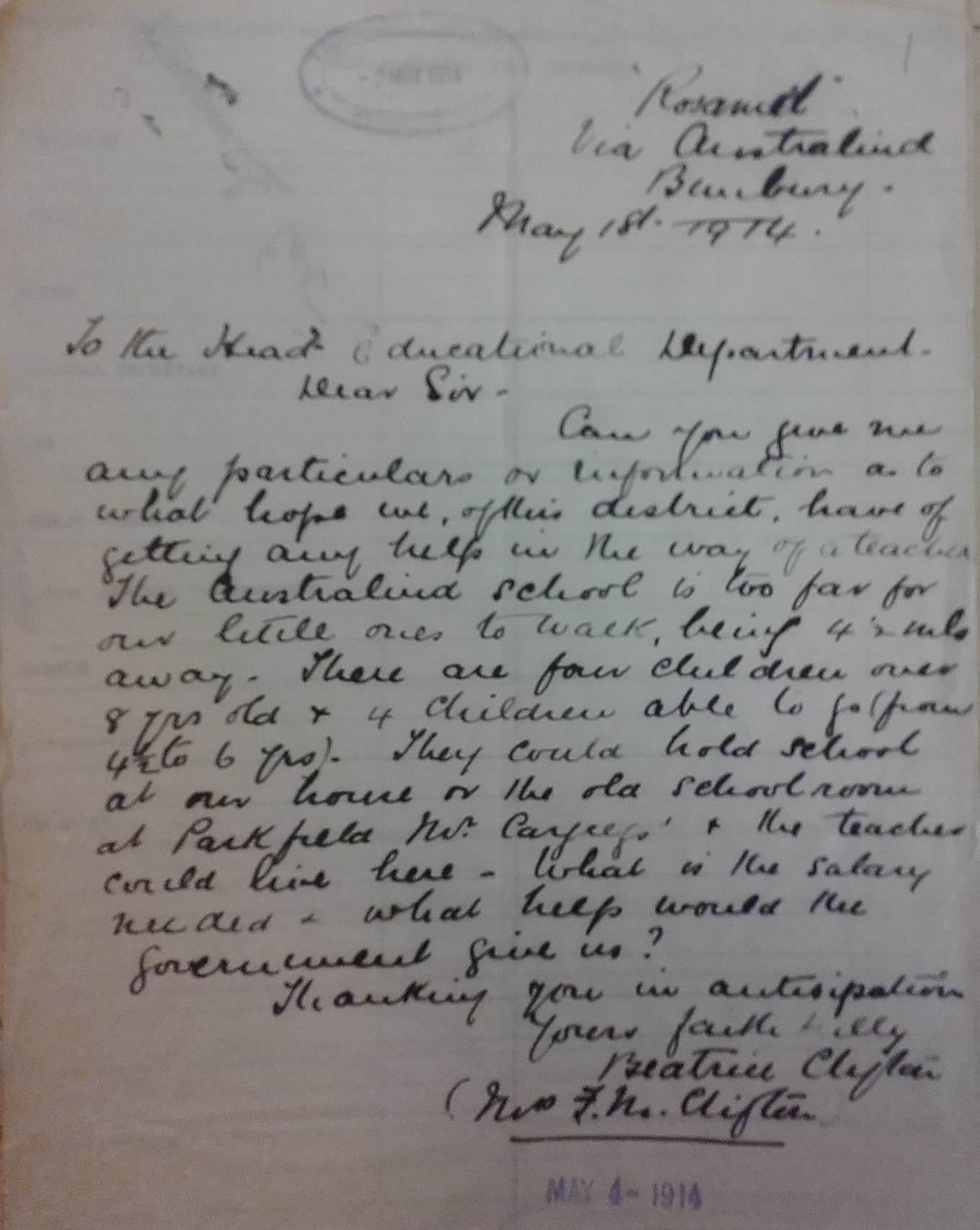 A typewritten reply was sent on 6 May 1914 from the Director of Education with a copy of the regulations relating to Assisted Schools. He went on to say:

… ‘At the same time I should like to know if there is any possibility of the children being driven. If this can be arranged an allowance of 6d per day for each child between 6 and 14 years of age can be made. If this cannot be done of course the only regulations applicable are those relating to assisted schools. From these you will see that if a proper building is provided and the services of a competent teacher obtained the Department will subsidise the teachers [sic] salary at the rate of £7 per head per annum on the average attendance, provided the parents guarantee to supplement the grant so that teacher after paying all charges for board and lodging shall have at least £30 per annum over and above the cost of her board and lodging. The Department will of course assist the parents to find a teacher but it will expedite matters considerably if there is anyone in the district competent and willing to undertake the duties.’[3]

Mrs Clifton wrote back in July to the Director of Education saying that she could not get the people of the district to combine forces and so she had to abandon the idea.[4]