This article is a condensed version of a talk presented to the Royal Western Australian Historical Society in July 2016 by Dr Fred Lovegrove, grandson of Dr Fred Lovegrove (snr), and is published with the permission of its author. The original version, entitled ‘The Doctors Lovegrove – Thomas Henry, Charles and Fred’, was published in Early Days, Journal of the Royal Western Australian Historical Society, Number 100, 2016, p. 53.

Frederic Thomas Alexander Lovegrove MRCP, FRCS, MB, ChB. was born in Liverpool, England, and graduated from Liverpool University in 1900. He travelled to Albany on SS Persic, arriving in July 1900. 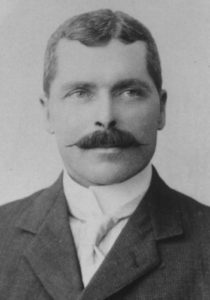 He was initially acting resident Medical Officer in York, and then Carnarvon. After the death of his first wife, he commenced work in Yarloop in August 1901. He remained for one year, returning to England in July 1902 for almost two years. He then worked in Kookynie, and then Marble Bar.

In January 1906, Dr Fred Lovegrove was back in Yarloop where he stayed until 1908, when he was appointed as Medical Superintendent of the Lock Hospitals on Bernier and Dorre Islands.

During his second medical appointment in Yarloop, he and his wife Edith had two of their four sons, Frederic Thomas Baile (Tom), who was born on 15 December 1906, and Edwin Archard (Dick) born 29 November 1907.

Dr Charles Lovegrove, his uncle, was District Medical Officer and Resident Magistrate and Coroner in Pinjarra. When one of the employees of the company was crushed in an accident, Charles travelled to Yarloop to assist his nephew.

Another uncle, Dr Thomas Henry Lovegrove, was the Principal Medical Officer for Western Australia from 1895 to 1909.

Dr Fred Lovegrove later had a practice in Tambellup and, after service with the Royal Australian Medical Corps during WW1, at Dumbleyung before Government appointments in Perth as Medical Officer to the Railways, and to the Government Insurance Office.