On Saturday, August 28, the numerous friends of Mrs. Pinner Senr. were saddened to hear that she had passed away at her home in Harvey. Mrs. Pinner had been in failing health for some time past, and her end was not altogether unexpected. The deceased lady who was held in the highest esteem and affection by all who came in contact with her was 63 years and 9 months old. Born in Dalesford (Victoria), she came to this district in company with her husband and family 23 years ago. She was the mother of 15 children, 11 of whom survive her.

On Sunday afternoon she was laid to rest in the Harvey cemetery, Mr. W. H. G. Wakefield of the Church of Christ performing the last funeral rites. The sorrowing family were the recipients of many letters of sympathy and telegrams. The cortege was one of the largest seen in Harvey and would have been much longer had the sad news been more widely known at the time. The Pall Bearers were Messrs R. M. Wilson, Constable Gould, R. Wagner. H. Jarvis, S. Millar, and N. Johnstone. The chief mourners were Mr. Pinner (husband), William, Thomas, Albert, Charles, Stanley and Gordon (sons), Rose (Mrs. Gardiner) Elizabeth (Mrs. Jones), Ada (Mrs. Jackson), Vera, (Mrs. P. McNeil) and Stella (daughters), D. Gardiner of Dowerin, R. Jones, W. R. Jackson, and P. McNeil, (sons-in-law), Mrs. T. Pinner Junr, and Mrs. A. Pinner, (daughters-in-law), and Mr. S. Byrne (grandson). 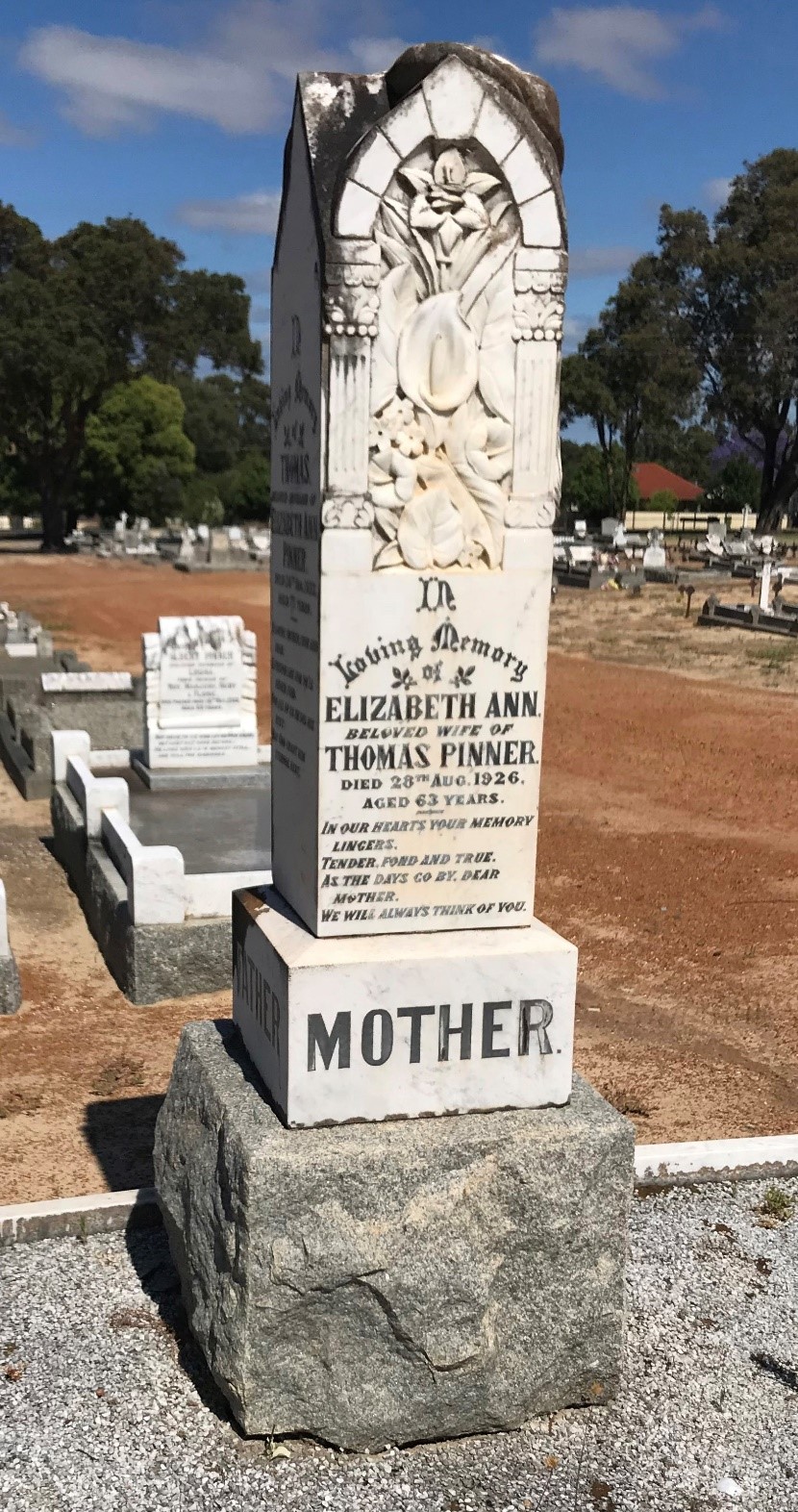 Elizabeth Pinner’s side of the headstone, Old Harvey Cemetery.

Mr. Thomas Pinner, a retired farmer of Harvey, died at the residence of his daughter, Mrs. W. R. Jackson, Weir-street, on August 24 at the age of 76 years. The late Mr. Pinner was born in Dalesford, Victoria and had been in Western Australia for 31 years. His wife had predeceased him by a number of years but he leaves a large family consisting of six sons, and five daughters.

The funeral took place yesterday morning the remains being laid in the Church of Christ portion of the Harvey Cemetery. Mr. A. Hutson performed the last rites and there was a large gathering of friends and relations at the funeral. Messrs William Brittain and Son, of Bunbury, attended to the funeral arrangements.

Thomas Pinner’s side of the headstone.