On Friday night the death took place, at his residence, Brunswick, of Mr. John Crampton, who must be classed in the category of the pioneers of the South West, and particularly of the Brunswick district He was in his 75th year. He left the old country in the ship Diadem [and arrived] on April 12, 1842, one of his shipmates being Mr. James Moore, of Bunbury, and with whom he went to school before he left England. Deceased’s father and mother and the rest of the family were on board, and when they landed deceased, with his parents, went to settle in Australind. He was there for three or four years when he took up Wedderburn, the properly of Dr. Ferguson, but now owned by Mr. Edwin Rose.[1] He lived at Wedderburn nearly fifteen years, and then he moved on to the farm on which he died and which was his own property. He has two brothers still living.

Deceased was married twice, his first wife being a sister of Mr. Jas. Moore, [Frances Moore] Bunbury. There were two daughters issue of the marriage, both married, one being Mrs. Woodrow, and the other Mrs. Havcox. There were five children of the second marriage, a number being still in the district in which they were born. His second wife [Clementina Gardiner, daughter of Reuben and Ann Gardiner] predeceased him about 18 months ago. Deceased was well liked and greatly respected at Brunswick and through-out the district, and sincere sympathy was expressed on Saturday morning at his demise. The funeral took place on Saturday afternoon the body being interred in the Bunbury Cemetery.

The death occurred on Wednesday last of another old and respected resident of the South West in the person of Mrs. Crampton, wife of Mr. John Crampton, of Brunswick. The deceased lady, who was 61 years of age, was born at Australind. Her father, the late Mr. Reuben Gardiner, arrived in the State with the first batch of colonists under the W. A. Land Co., which had its headquarters at Australind. On the 2nd June, 1862, she was married to Mr. John Crampton, farmer, of Brunswick, where she resided up to the time of her death. There were five children of the marriage—Mr. Luke Crampton, Mrs. Ernest Lawrence, Mrs. Reg. Withers, Miss Eva Crampton, and Mr. John Crampton. By reason of her genial disposition, she was greatly respected. She took an active part in any movement which had for its object the advancement of the community in which she resided, although her time was mostly devoted to her family duties. Great sympathy is felt for Mr. Crampton and family in the loss which has been sustained.

The interment took place this afternoon in the Church of England Cemetery, the Rev. T. Secombe officiating at the grave. The pall-bearers were the Hon. E. M. Clarke, M.L.C., Mr. W. B. Mitchell, Mr. G. R. Teede, Inspector Holmes, Mr. A. F. Clifton, Mr. A. E. Clifton, Mr. J. Partridge and Mr. T. Marriott. The mortuary arrangements were in the hands of Messrs. J. & H. Gibbs.

Death of Mrs Crampton. — We regret to record the death of Mrs John Crampton, which took place at her residence, Brunswick, at an early hour this morning. The deceased, who was 61 years of age, was born at Australind, and resided her whole life within a few miles of that place. Her father, the late Reuben Gardiner, was one of the pioneer settlers of this district, being one of the first arrivals under the West Australian Colonisation Company, which had its headquarters in this State at Australind. The deceased was married some forty years ago to Mr John Crampton, of Brunswick. She was of a retiring disposition, being entirely devoted to her children and her home, and was an exemplary wife and a good mother. Her children, now all grown up, and who survive her, are Mr Luke Crampton, Mrs Reg. Withers, Mrs E. Lawrence, Miss Crampton, and Mr T. Crampton.

For some considerable time prior to her death, Mrs Crampton suffered from heart disease. The disease took an acute form about a month ago, and Dr Flynn’s unremitting attention was unavailing in checking it. The interment will take place at Bunbury, the cortege moving from the railway station tomorrow afternoon immediately after the arrival of the 2.40 train. We extend to Mr Crampton and his family our sympathy in their sad bereavement.

The death occurred in the Harvey hospital on New Year’s Day of Mrs. Lucy Crampton. The late Mrs. Crampton had been in indifferent health for some months and her demise was not unexpected. She was 91 years of age. She was the seventh daughter of Reuben and Ann Gardiner, who arrived in the State from England in 1842 and settled at Australind. The de-ceased was born in Australind in 1847 and in 1865 she was married in the old Picton Church by the Rev. Canon Wollaston to Mr. Alfred Crampton. The newly married couple settled first at Myalup, but after a few months they removed to Uduc, where the deceased had resided 72 years. Her husband died in 1917. 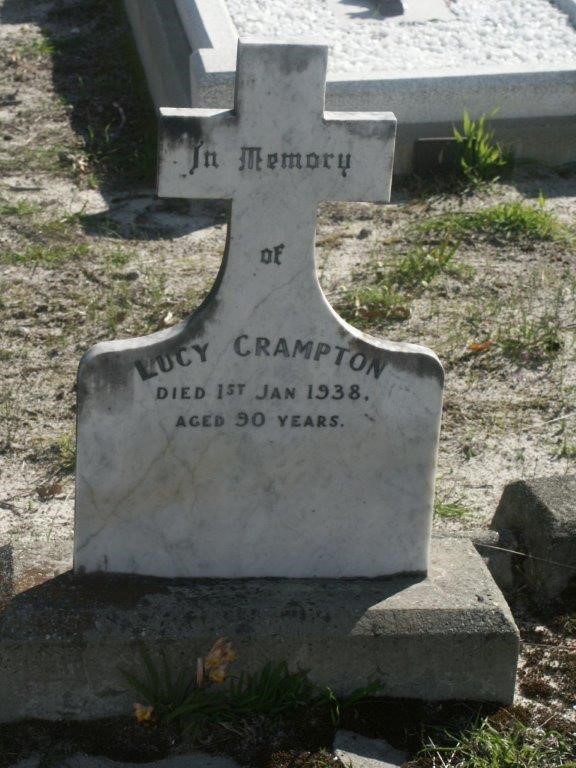 Another of the oldest residents of the South-West passed away on Saturday morning, when Mrs. Elizabeth Crampton, wife of Mr. Chas. Crampton, died at the residence of her daughter, Mrs. R. M. Esmond, Coast-road, Harvey, at 4 a.m. The sad event was not altogether unexpected, as the deceased lady (who was well over 70 years of age) had been ailing for some time, and gradually becoming worse, was compelled to take to her bed about three weeks ago, from which time it was seen she showed practically no signs of improvement. Deceased was a member of one of the pioneering families of the district, having resided in the South-West for over 40 years, arriving here from England. She had a great number of relatives in the State, amongst them being: — Mr. Chas Crampton, husband; Mrs. R. H. Esmond (Harvey) and Mrs. Sheehan (Geraldton), daughters; Mr. Aubrey Crampton (Roelands), son; Messrs. Reg. and Archibald Crampton, of Harvey, are nephews of the deceased.

The funeral took place on Sunday, the place of interment being the Church of England portion of the Cookernup Cemetery. The funeral arrangements were in the hands of, Messrs. W. Brittain and Son, Bunbury, and Mr. P. J. Ward, of Harvey.

The funeral of the late Mrs. Elizabeth Crampton, of Harvey, took place last Sunday. The cortege left the residence of Mrs. R. H. Esmond at 12.30 en route for the Cookernup cemetery, and considering the intense heat of the day, was attended by a good number of relatives and friends who followed the remains to the grave-side to pay their last tribute of respect to the deceased lady. The chief mourners were Mr and Mrs R. M. Esmond, and Messrs. Arch, and Reg. Crampton. The pallbearers were Messrs O. Rath, C. P. Charman, Sharpe and Ward. The following sent wreaths: Mr and Mrs Sharpe, Mr and Mrs Rath, Mr and Mrs Esmond, Mr and Mrs Standford, and many others. The deceased lady was a colonist of 60 years, not 40 as previously stated, and was 76 years of age at the time of her death.

[1] John Crampton didn’t own Wedderburn, he worked there. See The McAndrews of Wedderburn on this website.