Mr. Joseph Manning, of Beach road, Bunbury, passed away at St. Clair’s Hospital on Sunday, after a short illness, at the age of 79. He was brought to Western Australia by his parents when an infant, the family travelling on the sailing ship Will Watch which arrived at Fremantle in 1852. His father set up a dairy business in Perth, and that business is still in existence. Thirty-five years ago, the deceased came to Mylup [Myalup], the original home of the Crampton family. The old home, like many of those in the early days, had an upper storey, to enable the residents to cope with the natives if they became troublesome. Although Mr. Manning never took part in public affairs, he was a keen agriculturalist, and a staunch supporter of the local agricultural society. For many years he managed the stock section, which, in contrast to conditions prevailing today, was the great feature of Bunbury shows, and ranked only second to the display at the Perth Royal. The late Mr. Manning was a staunch supporter of the Congregational Church, and for years used to place his large boat at the disposal of the church authorities for the annual church picnic. A keen sportsman, he was an expert with gun and line, and few knew better than he the favoured spots for fishermen, not only on the estuary, but around the coast. On retiring from active work at Mylup, Mr. Manning came to Bunbury to live and was apparently hale and hearty until a couple of weeks ago. Last month he spent a good deal of time in Perth, visiting many of the friends of his early days. He leaves a widow, a daughter, and three sons to mourn his loss. (South Western Tribune, 24 June 1930.) 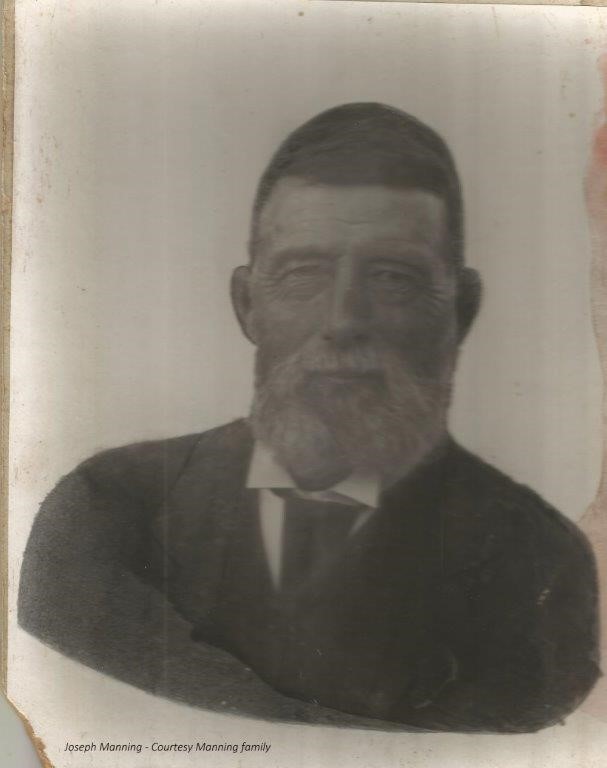 A link with the early days of Harvey district was severed with the sudden death at his home at Warawarrup [Warrawarrup], near Harvey at about 8.20 a.m. on Friday last, of Ernest Joseph Manning at the age of 67 years. He left a widow and five sons, Mr I. W. Manning, M.L.A., Messrs. David, Bert and Lindsay of Harvey, and Mr. Keith Manning, of Woomera Rocket Range, South Australia.

One of the best-known figures in the district, Mr. Manning at the time of his death was the “father” of the Harvey Road Board, having represented the west ward continuously from 1914, with the exception of a small break in the year 1950-51. The suddenness of his death can be gauged from the fact that only two days before his death he attended a finance committee meeting of the road board.

The late gentleman was born on March 10, 1885, in Perth. His parents, the late Joseph and Jane Manning had a dairy near what is today King’s Park. His mother came out from Scotland with the Rev. David Shearer and family, who founded St. Andrew’s Presbyterian Church in Perth. In 1895 the late Mr. Manning’s parents came to the Harvey district, where they purchased the Myalup estate from the Crampton family. The late Mr. Manning took over Myalup on March 29, 1911, when he married Laura Mabel Fidler, of South Australia, at the Congregational Church, Subiaco. His father died in 1930 and his mother passed away in 1941, [sic, 1942] both at Bunbury.

He was educated at Australind, Bunbury and Scotch College and was for many years a very active member of the committee of the old Wellington Agricultural Society, which conducted its show at Bunbury. He was head stock steward. His sons were prominent exhibitors in the Jersey section of this show, and followed on by exhibiting in the Harvey and other South-West shows, as well as the Royal Show, where their Jerseys have been most prominent, and over the years a prominent Jersey stud had been built up at Myalup. In his younger days Mr. Manning was also an active member of the Bunbury branch of the Independent Order of Rechabites. In 1928 he purchased a farm at Warawarrup and at the time of his death he was farming his two properties assisted by two of his sons.

Prior to Tuesday’s meeting of the road board, members stood in silence in respect to the late Mr. Manning. The chairman (Mr. T. W. D. Smith) very feelingly said that they were starting their meeting on a note of gloom because they missed from the head of the table one who had been on the board continuously with the exception of one small break and it was with great regret that they looked at the vacant chair that day. Mr. Smith moved that a letter of condolence and deepest sympathy be sent from the board to Mrs. Manning— “that grand old lady we have reason to remember, because for many years during our road board inspections she made her home an open house to us,” and family. They had lost a “father of the board,” a man who had played an important part on the board and had pioneered a portion of the district, said Mr. Smith.

The high esteem in which the late Mr. Manning was held was evident from the large crowd which came from near and far to attend the funeral, held in the Methodist portion of the Harvey cemetery last Monday morning. Rev. J. Hough conducted the service, assisted by Rev. E. B. Roger, of Perth. The cortege left his Warawarrup home, where a short family service was held.

The death occurred on February 21 at St. John of God Hospital, Subiaco, of Mrs. Laura Mabel Manning, who was for many years a well-known identity of this district, where she was closely associated with its development over many years. Her husband, Mr. Ernest J. Manning, a road board member for many years representing the west ward, predeceased her by two years. She had a family of five boys, who include the present Member of Parliament for the Harvey electorate, Mr. Iven Manning and all of whom in turn were closely connected with the early development of the district. Living at Myalup they were for the most part removed from the ordinary centres of education and were educated by the correspondence system.[1]

The late Mrs. Manning during her life time received many tributes from a wide circle of friends who had come to respect and admire her many sterling qualities. She took a keen interest in public affairs, though she never took an active part in them. She was a noted hostess, a keen supporter of the church, and one well-known resident of Harvey who knew her for many years, said that the world was her family and her home. The late Mrs. Manning was born at Laura, South Australia 73 years ago.[2] She came to Western Australia in 1906 and was married at Perth on March 29, 1911. She was a grand-daughter of a South Australian pioneering family and brought her pioneering instincts with her to this State, where there was ample scope for them.

Her death followed a long illness. The funeral took place on Tuesday afternoon in the Methodist portion of the Harvey cemetery and it was one of the largest funerals seen here for many years. It was estimated that 150 people attended the service which was conducted by Rev. R. E. Finch. Chief mourners were David, Bertram, Keith, Iven and Lindsay (sons); Mesdames E. D. and I. W. Manning (daughters-in-law) and Mr. and Mrs. G. Perkins and Messrs. A. G. and D. W. Manning. The Pall-bearers were Messrs. C. H. Henning M.L.C., F. M. Clifton, J. W. Hindmarsh, J. Lowe, Jack Clifton, A. Esmond, B. H. Lofthouse and A. Reading. (Harvey Murray Times, 26 February 1954.)

[1] For more information see ‘Myalup School’ on this website.