John Nutt had a tough upbringing. The 1841 census shows him at the age of six, an inmate of the Tenbury Union Workhouse in Worcestershire, along with his mother Mary Nutt (30) and his brothers Peter (5) and Thomas (1.5 months). All were paupers, listed as born in Tenbury, apart from Mary (place of birth not named).[1]

By 1850 John, aged 13, was charged at the Midsummer Sessions at Worcester with breaking into a neighbouring house and stealing a watch and some coins. The investigating policeman had questioned John about the matter, saying that he would forgive him if the items were handed over. John told his younger brother Thomas where the stolen items were and they were soon retrieved from a hiding place behind his mother’s washtub.[2] John was sentenced to seven years’ transportation and it was recommended that he should be admitted to the Parkhurst Reformatory Prison on the Isle of Wight.[3] An application form was signed by a Court Official.[4] 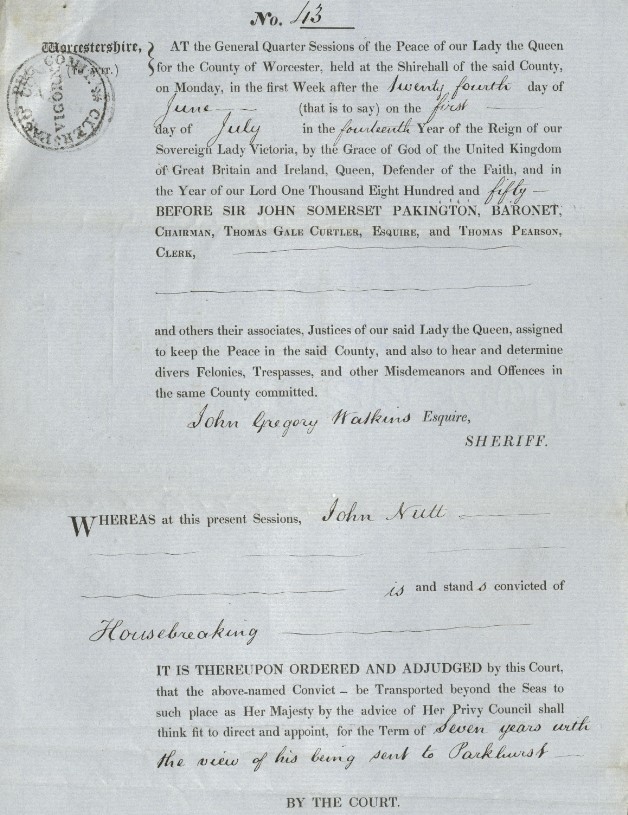 [Note: Parkhurst Prison for Boys – At the time of its formation in 1838 the aim of this institution was to provide corrective discipline along with moral, religious and industrial training as preparation for emigration (as free emigrants or convicts). By the mid-1850s Parkhurst boys were being liberated back into the community to serve out their sentences on Ticket of Leave.[5]]

Whether John Nutt served time at Parkhurst Prison is not known. He did not leave the country. He was described as a ‘ticket-of-leave man’ when arrested at Tenbury in 1856, on another charge of housebreaking –

This time he was destined to be transported. He was taken from Portland Prison and on 24 February 1858 was placed onboard the Lord Raglan bound for Western Australia.[6] The ship arrived at Fremantle on 1 June 1858.

[Note: During the voyage, in an endeavour to improve the literacy and numeracy of the convicts, Surgeon Superintendent John Bower appointed the Rev. Frederick Lynch to run classes in basic literacy and numeracy skills. One of the convicts Stephen Stout served as his assistant teacher, while also giving occasional lectures to the men on a variety of subjects and producing a handwritten newsletter entitled ‘The Lifeboat’.[8] Bower recorded that John Nutt had attended day school but had made little progress during classes.[9]]

No more records have been found regarding John Nutt’s life from that date. It is possible that he left the Colony.