Auguste Wilhelm (aka Baron von Prediger) was born on 5 April 1829 in the Duchy of Bernburg,[1] now part of the Duchy of Anhalt in Germany. He was the son of Friederick Wilhelm, a major in the army of the King of Prussia, who died when Auguste was a boy.[2]

Auguste had an unhappy childhood and instead of becoming a merchant as his family expected, he chose to take an apprenticeship in the apothecary trade. He did not complete his training, however, leaving Germany in order to avoid military service.[3] Instead he went to England, arriving there about 1848, when we find him in Leeds, advertising as a teacher of the German language. In July 1848, as ‘Professor Auguste Wilhelm Prediger’, he advertised that he had removed to 16 Merriott Street in Leeds, where he conducted separate classes for men and ladies at 10/- per quarter.

We next find him in Edinburgh, with quite a large advertisement aimed at the upper class, as ‘Professor of the German Language and Literature, of Berlin’: 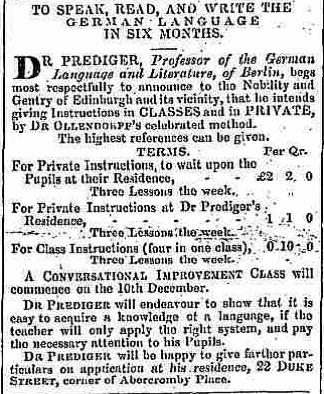 By 14 June 1851 he was in Dublin. By this time he had expanded his business into an ‘Institution for Modern Languages’, situated at 114 Upper Leeson Street, using the name ‘Dr Prediger’ and employing teachers of German, French, Spanish and Italian. Both men and ladies were invited to attend classes, with the option of instruction in their own homes.[4]

Soon afterwards Auguste found himself in trouble, summoned on a charge of having ordered two carpets and a stair carpet, which he had fitted in his lodgings but failed to pay the shop owner, despite several requests. A grocer’s clerk also gave evidence that he had not paid for a delivery. Auguste stated that he was to marry in three weeks, and would not be short of money after the wedding – a comment that roused laughter in the Court. Auguste was bound over on a surety of £20, to appear the following week.

By the time of his second appearance in the Capel Street Police Office, Auguste had discharged some of his debts and the case against him was dismissed, on the grounds that he had no intention of cheating anyone, but was just trying to set up small and comfortable premises for himself. Being a stranger and foreigner to Ireland was used as an excuse for the misunderstanding over payment of the debts, which he offered to clear up as quickly as possible. By that stage a default on the payment of two guitars had also been raised.[5]

Two days later he was charged with having pawned a guitar worth £1, that he had promised to get re-strung for a lady. He had sent another woman to the pawn-broker’s premises to do a deal on his behalf, and she returned with 3/- in cash. This time Wilhelm was fined 18/-. On the same day he was charged with having pawned a decanter stolen from his former lodging house, but as there was not sufficient evidence against him, this case was dismissed.[6]

A pattern of questionable behaviour on the part of Auguste Wilhelm was emerging, of committing small crimes then quickly moving on. A couple of years later, when facing a more serious charge in Yorkshire, he denied having paraded around Dublin in a carriage and a pair of greys, or that he had been advertised there as a defaulter, nor had he retired from Dublin in a hurry.[7]

He had returned to England and set himself up as a surgeon in Halifax, under the name of ‘Auguste Wilhelm, Baron von Prediger’. Whether he had any right to this title is questionable. He certainly was not a qualified surgeon. At that time there were few regulations to prevent various ‘quack’ operators giving medical advice and treatments from their shop-front locations in towns all around the country. It was only when their so-called treatments had tragic results that they were called to account.

In 1853 he was arrested for attempting to procure an abortion on a young woman named Mary Fielding, firstly by providing her with a bottle of oil of savin (juniper oil), and after that treatment failed, injecting her with a lotion for the purpose. During his trial at the York Assizes he claimed that he did not  know that she was pregnant and was treating her against a possible sexually transmitted disease caught from her partner Joseph Moore.[8] As there was no evidence that the substance used was noxious, and no instruments had been used, Wilhelm was acquitted of the crime and was allowed to go back to his surgery.[9]

On 30 September 1853 he married Mary Whiteley, daughter of a wire framer named William Whiteley. Their marriage certificate she signed with a cross, indicating that she was illiterate. Auguste’s father’s name was entered as ‘Friederick Wilhelm, major in the army of the King of Prussia’.

His premises in Halifax were advertised under the grandiose title of ‘Medical Hall’:

In July 1855 a son was born to Auguste Wilhelm, Baron von Prediger, and his wife Mary. They named him Caesar Alexander Wilhelm.

Auguste suffered a major setback when in 1855 his premises were damaged by fire, two days before Christmas.[10] He thanked his supporters for their assistance at that time:

He had no sooner recovered from this disaster when a flood swept through the shop in July the following year.[11] In 1856 he was arrested and placed in prison at York Castle, to face the County Court as a bankrupt. The published notice listed various business addresses around the country where he had previously operated as a teacher of languages, physician, chemist and dispensing apothecary.[12]

With his reputation in tatters, Auguste took his family to Manchester and opened a business there. Their second son Alfred Wilhelm was born at Manchester in 1857.[13] The record for the christening of an Alfred Alexander Wilhelm on 8 November 1857 at Newton Heath in the County of Lancaster names his parents as Mary and Auguste Wilhelm, Baron von Prediger, physician and surgeon, of Manchester.[14] It seems that little Alfred died in the September Quarter of 1858.[15]

By 1858 Auguste had met up with a young German, Carl Stadtmuller, who was enrolled in a medical course in Germany before coming to England. Together they set up a medical practice in Deansgate and then opened a second one in Great Ducie Street in Strangeways. Not having learned his lesson from his previous arrest, Auguste Wilhelm attempted an abortion on another young woman, this time with fatal consequences. 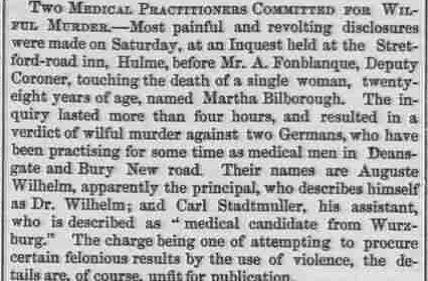 Both men were charged with murder. Another unsavoury trial took place, with gruesome details revealed in various publications around the country. Auguste Wilhelm (29) and Carl Stadtmuller (24), were taken to Kirkdale Prison. Wilhelm, described as an unaccredited practitioner in medicine, was found guilty of wilful murder and was sentenced to death.[16] A deal was done with Stadtmuller as the lesser partner in the crime, to give evidence as witness for the prosecution against Wilhelm. He was designated as an ‘approver’ and was acquitted of the crime.[17]  Wilhelm did himself no favours by being ‘excessively impertinent ‘when cross-examining witnesses, while his companion was described as very young and unable to speak English.[18]

Wilhelm awaited his fate in Kirkdale Prison near Liverpool, together with another convicted murderer named Henry Reid. Wilhelm’s poor wife Mary, heavily pregnant, visited him every second day. She had been rejected by her friends due to her involvement with Auguste, and had accepted the charity of a local innkeeper who provided her with lodgings near the prison.[19]

Two days before he was due to be hanged at the gaol and buried in its grounds, Wilhelm received word that his sentence had been commuted to penal servitude for life, as a result of two memorials (petitions) from leading foreign business firms in Liverpool and Manchester. When the fact of his reprieve finally sank in, August was said to have been overwhelmed with gratitude, sinking to his knees, ‘earnestly reiterating his thanks, not for man’s intersession only, but first and foremost to the merciful interposition of the Supreme Being to save him from his pending fate.’[20]

This decision was widely criticised, especially by the Irish newspapers, which compared it to the treatment of the prisoner Henry Reid, who had already received the ultimate punishment for having strangled his wife.[21]

Auguste remained in prison awaiting transportation and contemplating the prospect of a new life in the Colony of Western Australia, the only place now willing to accept the detritus of Britain’s society.

Poor Mary, while relieved at her husband’s respite from the gallows, was left destitute, with a 3½-year old son to care for and another baby on the way. However she remained loyal to Auguste, declaring him to be a kind husband. Another son, also named Alfred Wilhelm, was born in the June Quarter of 1859 at Manchester.[22] He was baptised on 1 July 1860 in the Parish of St Philip, Manchester, in the County of Lancaster, recorded as the son of Auguste Wilhelm, druggist of Blakely, and his wife Mary.[23]

[The 1861 census records Mary Wilhelm, married, aged 31, born at Halifax, employed as a worsted weaver, living at Bowling Dyke, Northowram, in Halifax, Yorkshire, along with her father William Whitely, aged 65, a wire drawer, her unmarried sister Elizabeth, and Mary’s sons Ceaser (Caesar) aged 5, and Alfred, aged 1. Next door lived William Dyson (39), and his wife Elizabeth (née Whiteley). There was a large worsted mill in Bowling Dyke Lane and most people in the area were employed there.[24] In the 1871 census, Caesar Wilhelm was a 15-year-old boarder living with widow Elizabeth Dyson. His mother Mary and his young brother Alfred have not been found.]

Mary’s husband Auguste Wilhelm was taken onboard the convict ship Lincelles at Portland, bound for the Swan River colony. Auguste’s record while on the voyage was very good. He was described as a surgeon, and his reading and writing skills were deemed good as a result of a ‘superior education’.[25] The ship arrived at Fremantle on 28 January 1862.

Three days later Auguste was treated for a wound at the Fremantle Prison Hospital.[26] The Prison Superintendent recorded his qualifications as ‘a compounder’.[27] [A compounder – one who mixes ingredients for medicines.[28]]

On 15 October 1862 he signed for his possessions, which were quite extensive, listed as ‘a Bible, Prayer, Hymn Book and Letters, a box of Sundries, consisting of teeth ivory tablets[31] and (indecipherable), a leather purse, spunge (sic), pen holder, blackboard pencil and Manual.’[32]

He received his ticket-of-leave in January 1864 and on 30 June that year he was in the Champion Bay District, self-employed and earning £100 per annum.[33] There was a shortage of doctors in the colony, so it’s likely that he was employed as before.

In 1864 Auguste Wilhelm re-married, this time to Sophia Carnaghan, a young Irish woman, employed at the Bowes River near Northampton in Western Australia.[34] [She had immigrated on the Strathallan on 7 March 1862, along with her sister Agnes Carnaghan.[35] Agnes married William Carpenter at York in 1863.[36] ]

Their marriage was brief. Auguste Wilhelm died in an accident, on Christmas Day, 1864. His body was found near a copper mine:

…Next we hear of an individual named Augustus Wilhelm, a German Doctor, not long since from the Establishment (a clever practitioner we believe) being discovered dead in the bush near the Wheal Fortune Mine, and nothing whatever to account for his death.[37]

The cause of his death was officially recorded as a fall from a horse.[38]

[Note: Rica Erickson, in her book ‘The Bride Ships’, gives an account of the Prussian Consul in Adelaide, South Australia, being contacted by the family of Willhelm/Prediger, anxious about the whereabouts of their son. Somehow Sophia was tracked down in Western Australia and once documents proving her identity had been submitted, it seems likely that Wilhelm’s family may have forwarded some money for her support, as she owned a property in Murray Street which yielded rents in later years.[39]]

[1] From interview with Auguste Wilhelm while under sentence of death in York Prison, and published in The Express (London), 4 January 1859.

[27] Convict Department, Superintendent Orders (SO6 – SO8)

[38] Cause of Death of Ticket-of-leave Holders 1864, Annual Reports on the Convict Establishments at Western Australia and Tasmania, George Edward Eyre & William Spottiswoode, London, 1865.