John Warburton and John Morris, along with two others, were arrested at Preston in Lancashire on 4 January 1857 and convicted of breaking into a warehouse and stealing a variety of goods. Due to prior convictions they were both sentenced to ten years’ transportation. Richard Kay was sentenced to four years for receiving stolen goods –

Their trial was unusual in that the fourth member of the gang was a young woman, probably a sister of John Warburton, named Alice Warburton, who also received a ten-year sentence of transportation, but as a female was permitted to serve out her sentence in England, with a possible early release on Ticket of Leave. Alice’s prison records began in 1849, when she and John Warburton were convicted of stealing a handkerchief and a flannel singlet from one house and a handkerchief and a cotton dress from another. For these crimes John (18), was sentenced to nine months’, while Alice (12) and Henry Collins (10), were sentenced to six months’ hard labour in the House of Correction. Alice was in no way deterred by her sentence.[1] She had earned quite a reputation by 1865, when the following newspaper article listed her convictions – 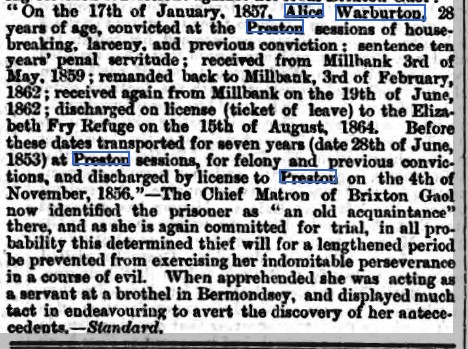 At the time of her arrest in 1857 Alice had not long been released on special licence from a sentence of seven years’ transportation, dating from an 1853 conviction of stealing women’s apparel. See permit below – 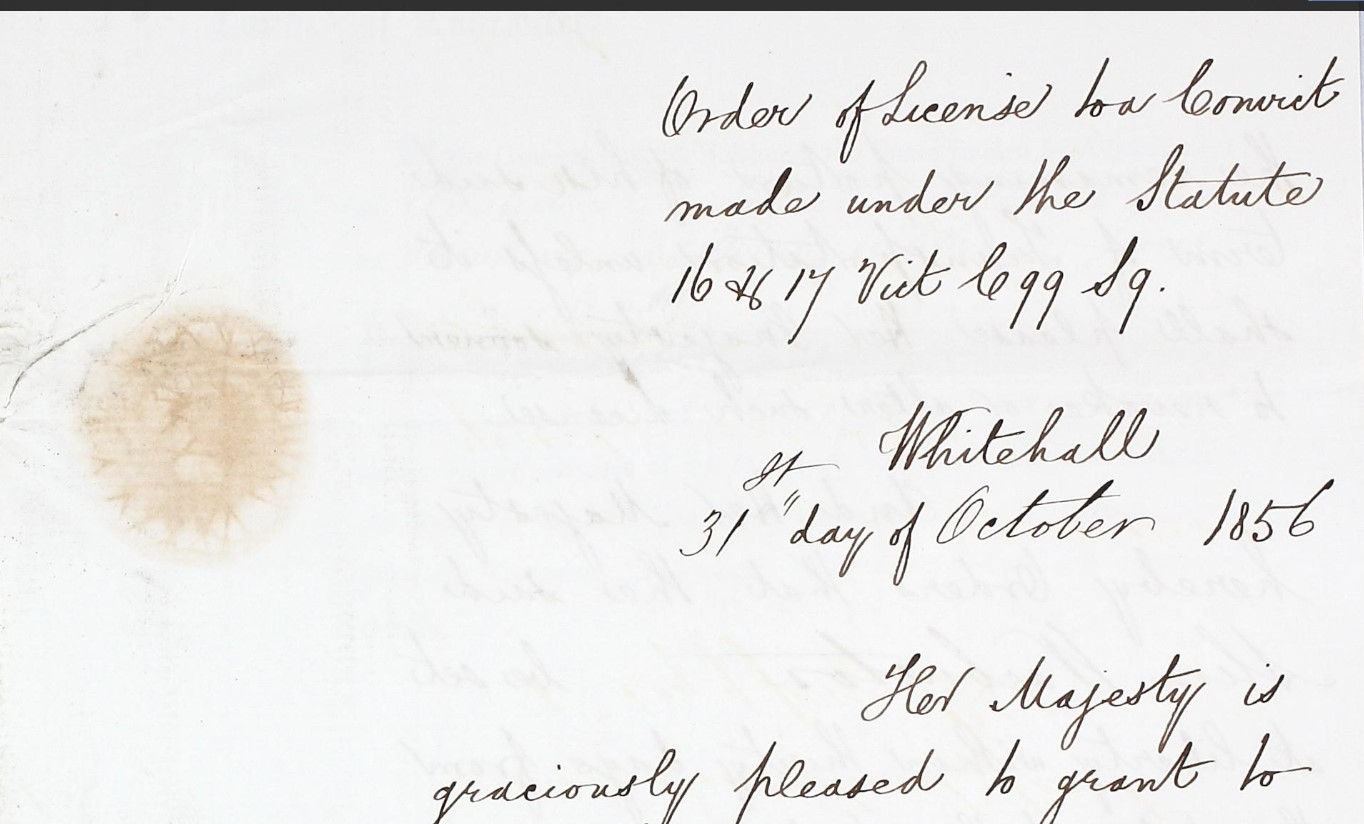 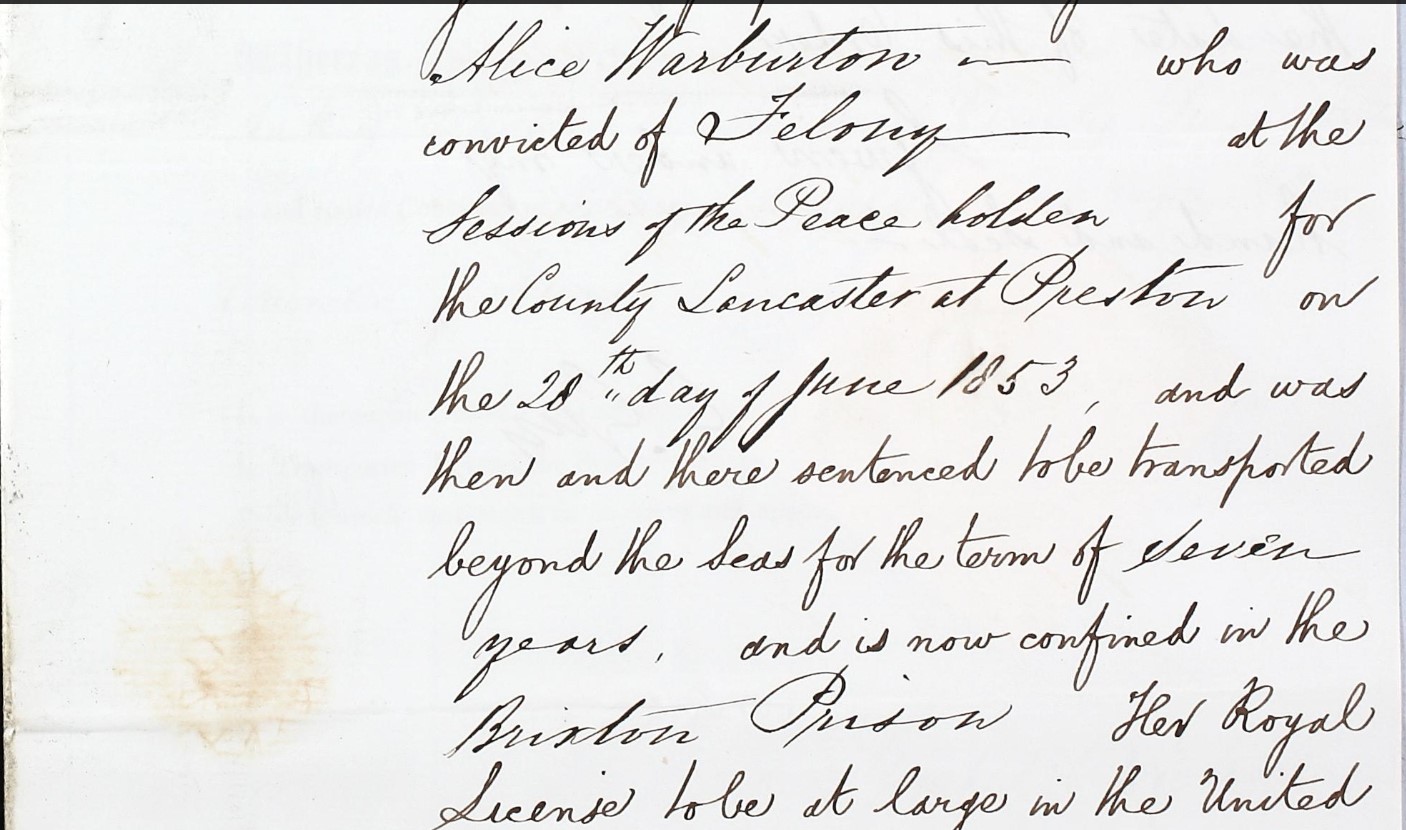 Alice Warburton’s Licence to be at large.[2]

John Warburton was removed from Chatham Prison and taken onboard the convict ship Edwin Fox, leaving Plymouth on 24 August 1858 and arriving in Western Australia on 20 November 1858.

His record on arrival was described as ‘Good’ while in Separate Confinement, at Public Works and during the voyage to Australia. He was by trade an engine turner, aged 23, single, able to read and write imperfectly.[3] Another source describes him as a labourer/sailor.[4] He was 5’6” in height, with dark brown hair, dark blue eyes, a long face, fair complexion and middling stout in build. His only mark was a scar on his forehead.[5]

In his later years John Warburton’s behaviour became more erratic. He was regularly picked up by the police for drunk and disorderly behaviour, with occasional stays in hospital.

On 23 May 1883 he was arrested as Local Convict No. 4234 (former No. 5092) and sentenced by GW Leake for larceny of a cow. Warburton was described as a Protestant labourer, employed as a teamster and night man. He received a remission of ten days and was discharged on 13 August 1883.[14]

11/2/91 – Convicted at Guildford of being unlawfully on premises (one month), and for stealing (two months).

John Warburton, an inmate of the Invalid Depot, pleaded guilty to a charge of stealing 18s. 6d. from the pocket of another inmate while bathing, and said he spent the money in drink. The accused had been before the court on 21 charges, three of them for larceny. He was now sentenced to six months’ imprisonment.[17]

Strayed from the Depot.

William Jones and John Warburton two depot men were charged with being devoid of means of support. The former said that he could get re-admission to the depot on the 1st. of next month, and until then had no place to go to. Warburton, in reply to the charge, said that he had been working until last Monday. Mr. Cowan remanded the pair until next Saturday, in order to ascertain whether their admission to the depot could be procured in the interval.[18]

John Warburton, an inmate of the Old Men’s Depot, attempted to commit suicide on Saturday night by cutting his throat with a razor. He was taken to the Perth Hospital, and attended to.

His wounds are not considered to be dangerous.[19]

The returns of the various charitable and other institutions for the month of June show that at the Mount Eliza Depot the admissions numbered 30, the discharges 31, and the deaths 3, and that there remained at the end of the month 265. The names of the inmates who died were Thomas Rees (aged 74), John Warburton (69), and Thomas Cutler (71).[20]

John Warburton’s death was confirmed in the official records as Reg. No. 1760, aged 69, parents unknown.[21] His place of burial is not known.

On 7 January 1857 John Morris was convicted at Preston in Lancashire of larceny, along with John Warburton. Morris had six summary convictions in 1853 and a previous sentence of seven years’ transportation, served in England.

On the day he left Wakefield Prison he was reported for striking a fellow prisoner and was held at Chatham Prison awaiting transportation to Western Australia. He arrived in WA on the Lord Raglan, on 1 June 1858, and his character while in Separate Confinement had been ‘Bad’, and on Public Works, ‘Good’.[22] He was described as married with one child, a boot-closer by trade.[23] Another reference described him as a mill-hand, tailor and cobbler.[24]

John Morris suffered badly from Cephalagia (headaches) and was admitted to hospital on several occasions. When admitted on 28 January 1859 a medical report expressed concern that his expression, conversation and general conduct may indicate mental disease and that he needed to be watched carefully. The next day he complained that he was feeling very nervous. On 8 February 1859 he was very noisy and violent and was sent to the Refactory Cells. Two weeks later he was showing signs of recovery, with headaches improved and quite well behaved. A month later it was recorded that he ‘mopes a good deal, much vacancy in expression of face. Considerable loss of memory. Well behaved’.[25]

23/9/61 – In answer to petition, Governor can see no grounds for any interference.

July 1869 – Gave evidence against Ferguson for attack against Morris’s employer,

Apart from his regular appearances in Court for drunken behaviour, John Morris appears to have been a steady worker. On 30 March 1872 he was awarded his Certificate of Freedom.[32] The following year, on 3 February 1873, it was recorded that John Morris, labourer, boot-maker, left Western Australia on the Mermaid, heading for America.[33] [The whaler Mermaid, 273 tons, Horan, master, left King George’s Sound on 8 February with a cargo of 1275 barrels of oil, bound for America.[34]]