The rapidly growing population of the Australind area in the 1980s led to the need for a public library at Australind. The history of the library is a story of adaption to circumstances, sharing facilities and staff, and eventually having its own facility.

June 1982 – A branch library at Australind was discussed by Council but no funds were available.

28 December 1982 – The Australind Library and Shire of Harvey-Australind sub-office opened in a vacant shop in the Australind Shopping Centre.

March 1987 – The Australind Library and Shire of Harvey-Australind sub-office opened in shared premises in the current Library building.

15 September 1989 – A separate Shire of Harvey-Australind Office opened next door, leaving the Australind Library to operate in its own building.

22 May 1992 – The genealogical library known as the Australind Family History Society (AFHS) was added to the rear of the Australind Library in its own facility. It was opened in 1992.

14 March 1998 – The extension to the Australind Library was opened, with AFHS situated at the rear in its own facility.

2021 – No further extensions have been made to either premises since 1998.

June and December 1982 – In the beginning

A branch library was discussed by the Shire of Harvey Council in June 1982 and it was agreed that an application be made to the State Library Board for an extra allocation of books, and that a library building and running costs be considered in the 1982/3 Budget. As no funds were available for a new building, the offer of a vacant shop at ‘The Village’ was accepted by the Council and the Shire Library and Shire of Harvey-Australind sub-office opened in the Australind Shopping Centre[1] on 28 December 1982.  That space is now Shop 6A, trading as ‘Our Massage’ and Shop 6, the Australind Laundrette.

In March 1987 the Australind Library and Shire of Harvey Australind sub-office had been built and opened for business in the current (but much smaller) Library building. The Community Centre next door, consisting of a meeting hall, children’s facility, work rooms and a child health clinic, was also opened for business in its current location. The buildings were connected by a pergola and walkway. Both buildings were officially opened by Hon. EK Hallahan, Minister for Community Services on 23 May 1987.

The Shire of Harvey-Australind Office was opened on 15 September 1989 by Hon. Kay Hallahan, freeing the Australind Library to operate in its own building. 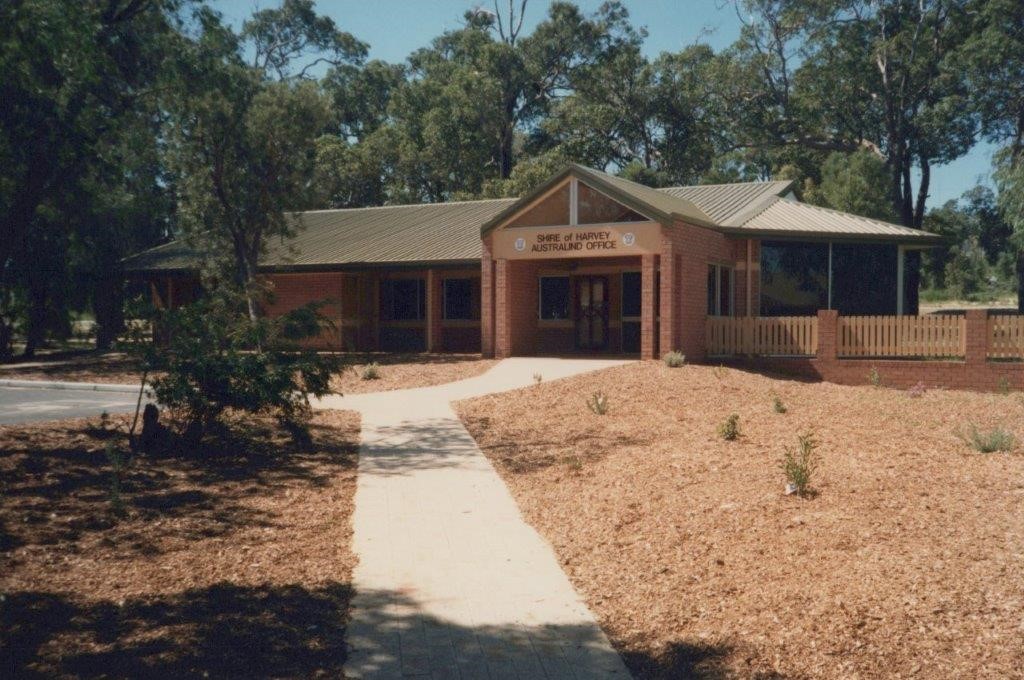 one week before the official opening. Photo courtesy of Margaret Frost. 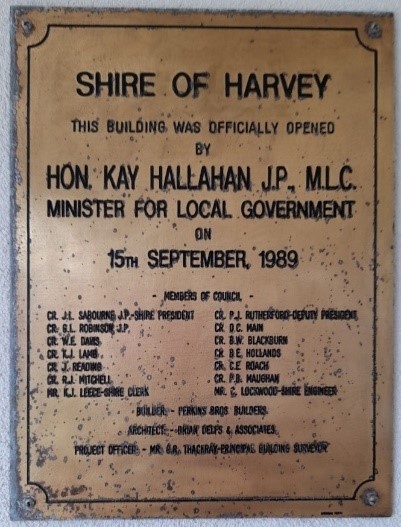 The official opening of the Shire of Harvey-Australind Office, 15 September 1989. 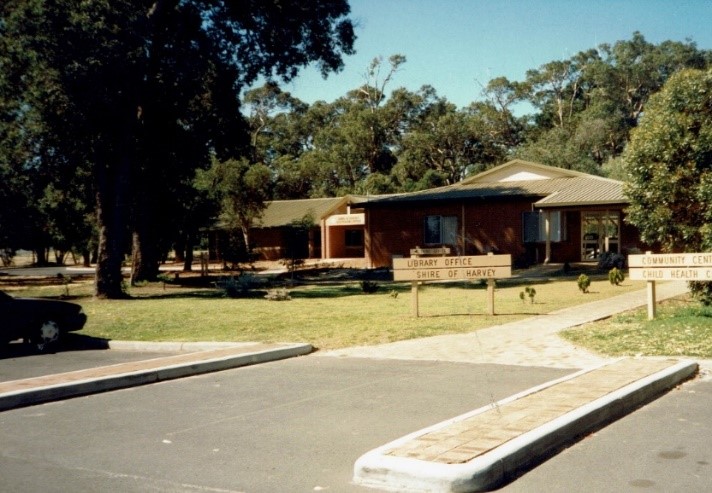 Shire Offices to the left, Library in the middle and the Community Centre and Child Health Centre to the right.  Photo taken after September, 1989 when the Shire Office and Public Library each had their own building. Photo courtesy of Margaret Frost.

The Australind Library building was extended at the rear to house Australind Family History Society’s genealogical library in its own facility. It was opened by the Hon. Carmen Lawrence, Premier of WA on 22 May 1992.

Preparation of earthworks for Australind Family History Society at the back of the original Library building, 1991.

Middle – Council Office to the right. 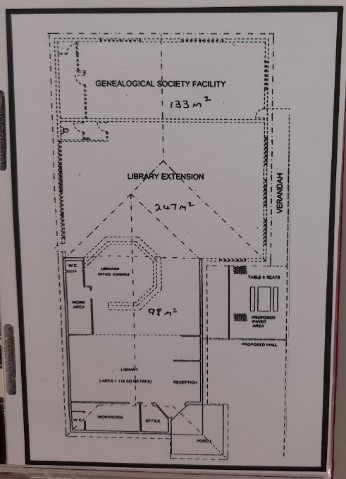 The plan for the expansion of the public and genealogical libraries, taken June or July 1997. Photo courtesy of Australind Family History Society.

The pad is prepared for the AFHS Library, 1997. Photo courtesy of AFHS. 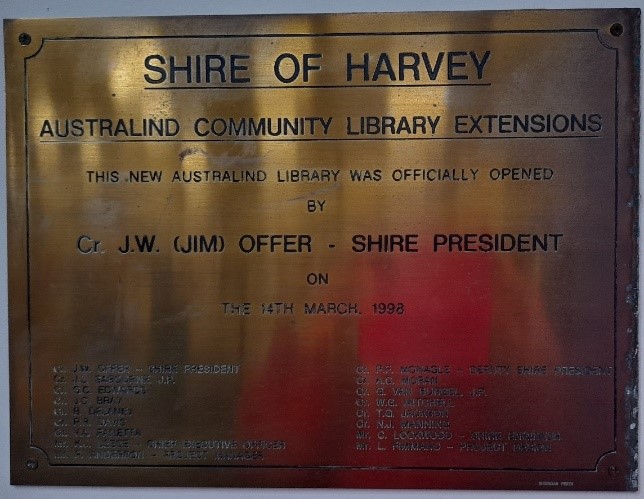 No further extensions have been made to either premises since then.

Margaret Frost, who was the second Council officer, began working in the Australind sub-branch in 1984. She writes about her job in the early days –

Initially Library and Council matters at Australind were handled from the Library which operated out of vacant shop space in the Australind Village Shopping Centre from December 28, 1982.

The first Council officer was Gwenda Peterson who was solely responsible for managing the Shire sub-office and Public Library. I started work with the Council on 17 September 1984 and continued running the joint shire office and library facility in the Shopping Centre until we moved into the new purpose-built building in February 1987 (still the current Australind Public Library today, but now bigger of course). More staff were employed and the office/library hours were extended to cater for the exploding population in Australind.  I continued in this new building until August 1989, when the Shire Office and Library facilities were separated and I transferred across to manage the Shire Office until February 1990.

Between December 1982 and August 1989, as well as handling all Shire enquiries and receipting/banking, I also ran the Library. It was manually run using a card system which required plenty of filing – two filing cards for each book, plus files for members, items borrowed, requests and membership. A selection of books was returned each month via Harvey Library as part of the Library Exchange programme with the State Library of WA. Lorraine Venables, the Harvey Librarian, to whom I originally reported, was responsible for selecting new stock for the Australind Library. From time to time requests were received for books through the inter-library loans scheme and these were duly mailed off.

It was a wonderful experience and an opportunity to meet so many new residents to the area, as my family and I were ourselves. As the statistics show, over all those years since 1982, Australind has expanded enormously.