John Sylvester’s criminal career in the industrial town of Sheffield in England began at an early age. Each term in prison for minor offences put him in contact with older criminals, learning the tricks of the trade.

At the time of the 1841 Census, at the age of 15, John was living at 8 Sims Croft, Sheffield West, in Yorkshire, with his father John (aged 40), a scale presser by trade, his mother Mary (30), and his two brothers, Verdan (or Verdon, aged 15?) and Peter (13). All were born in that county and all three boys were involved as apprentices in the cutlery trade.

Young John’s record was a litany of criminal behaviour. At the age of twelve he was convicted in February 1840 of being a rogue and a vagabond and was gaoled for three months. On 19 October 1842 he was convicted again and sentenced to two months after being found in a dwelling house at Brightside Bierlow for an unlawful purpose. He was described as only  5’1” in height at this stage, able to read the Testament, but unable to write.[1] [From then on, his records describe him as unable to read or write.] In September 1843 he served three months for stealing a plate shaving-glass from a shop at Sheffield.[2] On 17 February 1844 he served one month as a reputed thief. Later that year he was convicted at the Dorchester Sessions for obtaining money by false pretences, receiving a three-month term in prison. He had cheated a fruiterer at the Sheffield market out of six shillings, after asking him for a job.[3]

On 26 February1846, license-holder John Sylvester, aged 18, described as a scale presser, was convicted at York Castle of stealing a fur cap and a pair of braces at Sheffield and was sentenced to ten years’ transportation.[4] He was one of a group of prisoners sent from Millbank Prison to the Warrior Hulk at Bermuda on 18 April 1846.[5] It seems that  due to good conduct Sylvester was again released early.

His experience on the prison hulk did not deter him from committing more crimes after his release. In February 1852 John Sylvester was in prison for 14 days for assault, then in May 1853, at the age of 26 years, he was charged at the Wakefield Sessions with stealing  a tray containing 14/- and other coins from the premises of Sarah Eldridge, for which he was sentenced to seven years’ hard labour.[6] He served time in the Wakefield and Leicester Prisons, before being transferred to  Portsmouth Prison on 3 July 1854, where he remained until he was discharged on license on 3 July 1856. His brother Verdon of Coal Pit Lane, Sheffield, was listed as his next of kin.[7] 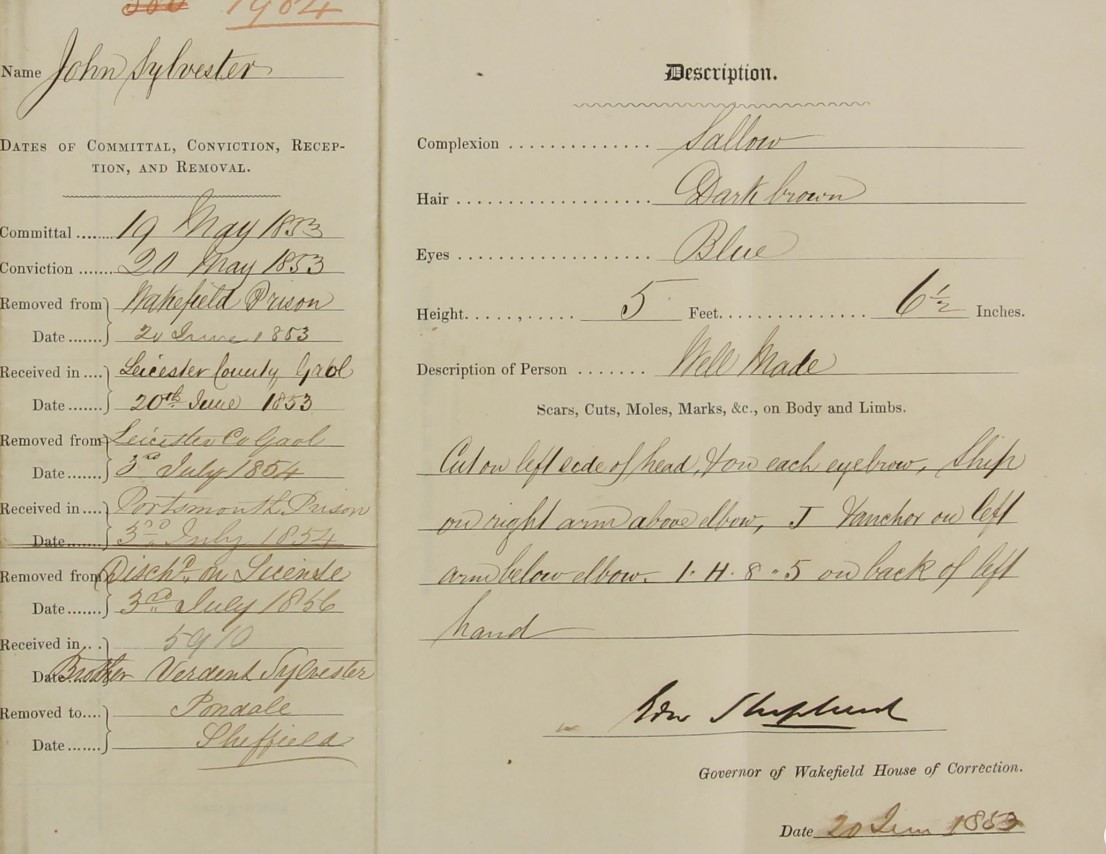 A few months later, on Christmas Eve in 1856, John Sylvester was identified as a ticket-of-leave man when arrested for a daring garrotte-style robbery which took place in Sheffield. Benjamin Stiring, a scissors grinder, was on his way home to Orchard Street, somewhat the worse for drink between 11 and 12 o’clock at night, when two man approached him and began a conversation.  One grabbed him around the neck, while the second man began rifling through his pockets. Styring wrestled the first man to the ground and called loudly for assistance. His wife came running out of the house and helped her husband to hold the man down. The other robber swore at her and  pulled her hair as he tried to rescue his partner from their clutches, before giving up and escaping into the darkness. Neighbours came out of their houses and ultimately secured the garrotter and handed him over to a policeman. At the police station he was soon recognised as John Sylvester, who had twice been sentenced to transportation. The first time was about ten years earlier, when he was sentenced to seven years for stealing a roll of cloth at Snighill, but was released after five years on a ticket-of-leave for good conduct and returned to Sheffield. The second time was four years ago, for a till robbery. After being released on a ticket-of-leave license, he had returned to Sheffield six months earlier, before absconding, after being reported for robbing his sister.[8]

Following his conviction at York Castle, he was held at Wakefield Prison from 29 May 1857, then transferred to to Portland Prison on 20 April 1858. He was taken onboard the convict ship Edwin Fox on 18 August 1858, bound for Western Australia.[9]

He arrived at Fremantle on 21 November 1858, described as a knife hafter, Protestant, aged 29, unable to read or write, convicted on 9 March 1857 at York and sentenced to 20 years, with two previous convictions for felony, six  summary convictions and twice sentenced to transportation. He spent 10 months and 21 days in Separate Confinement and his conduct was ‘Good’ while in prison.[10]

No work records have been found. His prison records in Western Australia are as follows –

16/10/86 – Sylvester convicted of drunkenness, but unable to pay the fine. Sentenced to one week in prison.[19]

No more records of John Sylvester have been found. Date and place of death are unknown.