Agitation for a school at Wokalup began in 1914. Although the children were able to go to Harvey to school, the travelling arrangements were far from satisfactory. The children caught the only train available at Wokalup Station, which made them one hour late for school, and as there was no afternoon passenger train, the children had to walk the four miles home along the railway line. This could be very dangerous. So, on 30 June 1914, Mrs Ethel Middleton of ‘Springdale’ Wokalup wrote to the Education Department requesting a school for the area. Thomas Hayward of Bundidup offered to give the land for the school and Mrs Middleton offered her services as teacher. As Ethel Dingle, she had taught school in Bunbury before her marriage.

In reply, the Department suggested that a portable school be removed from Muja to Wokalup. This school was now too small for Muja and could be put on the land offered – Lot 36 South West Highway, Wokalup. A survey determined that nine boys and five girls would attend the school and a room could be made available at 15/- a week for teacher accommodation.

The children of school age in the area at the time were:

There were five more children, unnamed on the list, between five and six who would need schooling soon.

The land resumed for the school was two acres, which had a four-chain frontage to the South West Highway, and the survey was paid for by the Department. Later, on 19 November 1915, this land was gazetted as Reserve No 15671.

Arrangements were made to bring the school building to Wokalup. The Glenfield school was relocated to Muja allowing the Muja School to come to Wokalup. The estimated cost of this move was £75 and the tender was let on 21 September 1914 to Mr A. Anderson who had tendered £61/10/-. He was required to complete the job by 1 January 1915 and Mrs Middleton was to be given the keys on completion of the work. The goods to stock the school arrived two weeks later and the school was opened by Miss Hazel McClymont on 26 January 1915. Some repairs were requested straight away as one desk was broken and also the lock on the door.

In January 1916, the teacher asked if a shelter shed could be erected as it was needed, but the Department replied that there was no money. When school reopened that year, there were 28 children on the roll and several more who were nearly six years old who would be enrolled during the year.

As the room was only built to hold 26 children, it was rather cramped and the teacher was told to refuse admittance to the young children who had not turned six. That year, Miss Lulu Kearney was the teacher and she too requested the Department to erect a shelter shed. The answer this time was not ‘no money’, but the rather startling information that the Wokalup School didn’t qualify for a shelter shed ‘as they can only be built at schools which have 50 or more pupils’.

The school inspector visited on 13 March 1916 and his report shows that there were 25 on the roll, that the population of the area seemed permanent and another 20 children in the area were aged from one to four years. Therefore, additions would be required and he suggested that the Wokalup School should be moved again – to Roelands – to be used as quarters for the teacher there. The Roelands school building, which had been partitioned to provide a schoolroom and teacher’s quarters, could be used at Wokalup with the partition removed, thus providing a larger schoolroom. The cost of the move and the conversion of the building for use at Wokalup were estimated at £250. However, the reply from the Department came back saying, ‘no funds were available’.

As May passed and winter drew on, the parents again asked for a shelter shed for the children. They proposed that they supply the labour required if the Department would supply the materials. They acknowledged that the removal of the school should be in the next year, as no funds had been provided in the current year’s budget, but they did want some shelter for their children in the winter.

The new school year of 1917 saw a request for a fence around the school, to stop cattle and sheep from eating the school gardens. In March of that year, plans were once more discussed for the new school. A decision was made on 2 March 1917 to proceed with a new school at Wokalup, to be 30 ft x 20 ft, and the fence was to be built when the new building was erected.

It was estimated that the fence would cost £9/10/-. The contract for the new school was let to Allen Moir of Burt Street, Fremantle, on 29 June 1917, at the price of £24/7/- , the building to be finished by 13 August 1917. School re-opened in this new building after the holidays, on 3 September 1917 with Mrs Ethel Middelton as teacher.

A complaint was made to the Department in July of 1919 that the canvas, which formed the upper part of the building, had worn through and rain beat in on the children when the wind blew. The canvas was repaired by the Public Works Department but not until the following December!

Later that year, a severe form of influenza struck the families in Wokalup, as well as throughout Australia and the rest of the world. At one time, twelve of the children were away sick with influenza.

In the 1920s, Mrs George Smith (née Marguerita Ray who had been teaching in Harvey) agreed to take over the school. The Smiths had a farm at Wokalup, but Mr Smith had been brought up at Mornington Mills, not far away in the hills. The next teacher was Miss Peggy Shine (who became Mrs Ferguson).

In October of 1932, there were 23 children on the roll and the number expected in 1933 was about 28. A new teacher came in 1934, Miss Barbara (Barry) Northwick, now Mrs Dick Lofthouse of Wokalup. By December of 1936, the numbers had fallen at the school and the Department decided that the school should close. The furniture and school stock were sent to Harvey and the school formally closed on 22 December 1936. In the New Year, the children were transported by bus to Harvey to school. They began there on 18 February 1937 thus returning full circle and ending twenty-one years of schooling at Wokalup.

The old building at Wokalup became available for letting or removal and in March of 1937 it was suggested that it should be taken to Brunswick school and used there as a manual training shed.

An application was received for the disposal of school reserve No.15671 and the Department agreed to this. On 30 January 1993, Mrs Jean Rigg, the last surviving immediate family member of Thomas Hayward, unveiled a plaque to commemorate the Wokalup School that was on the corner of Hope Avenue and South West Highway on the land made available by Thomas Hayward in 1914. 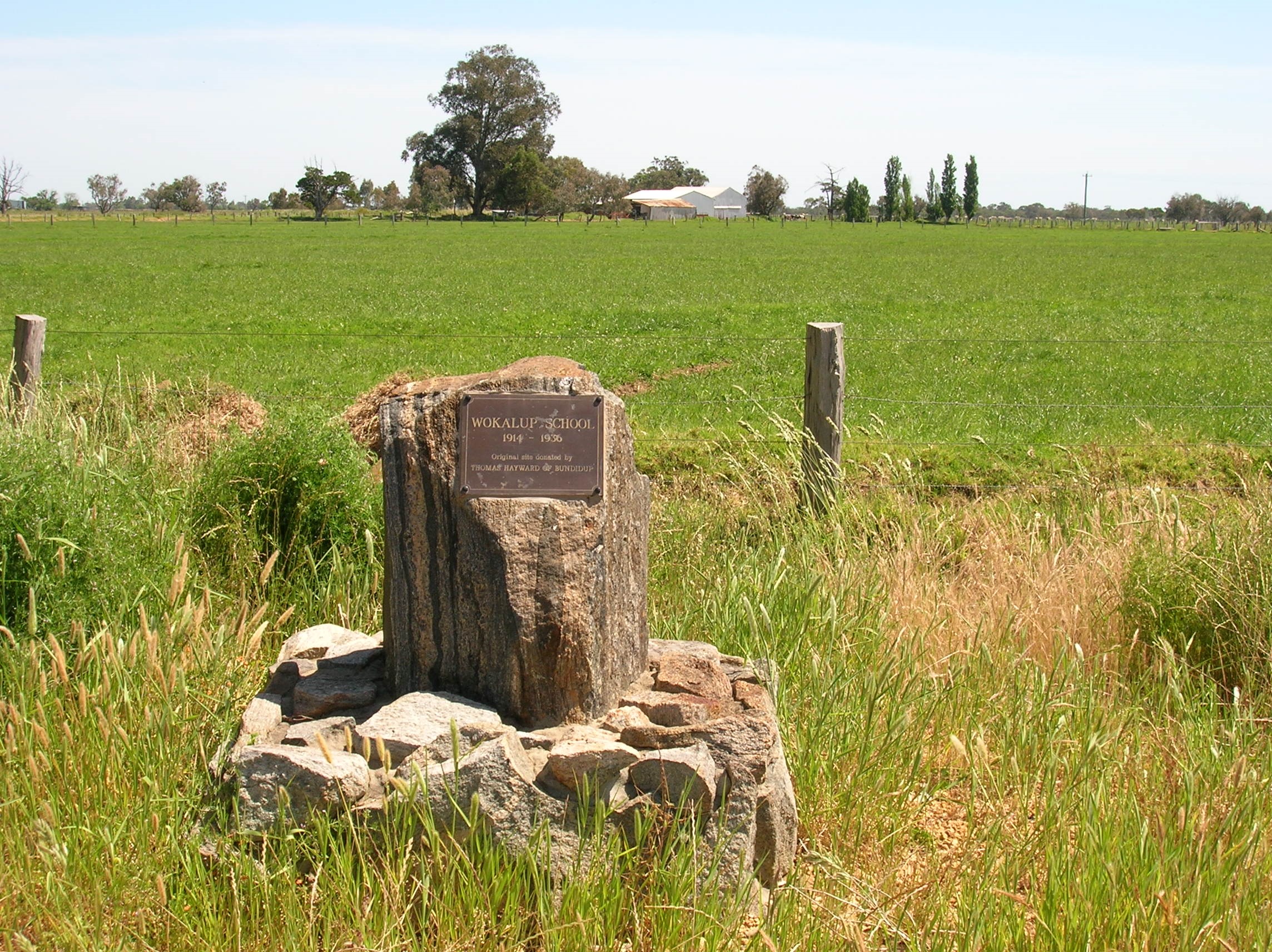 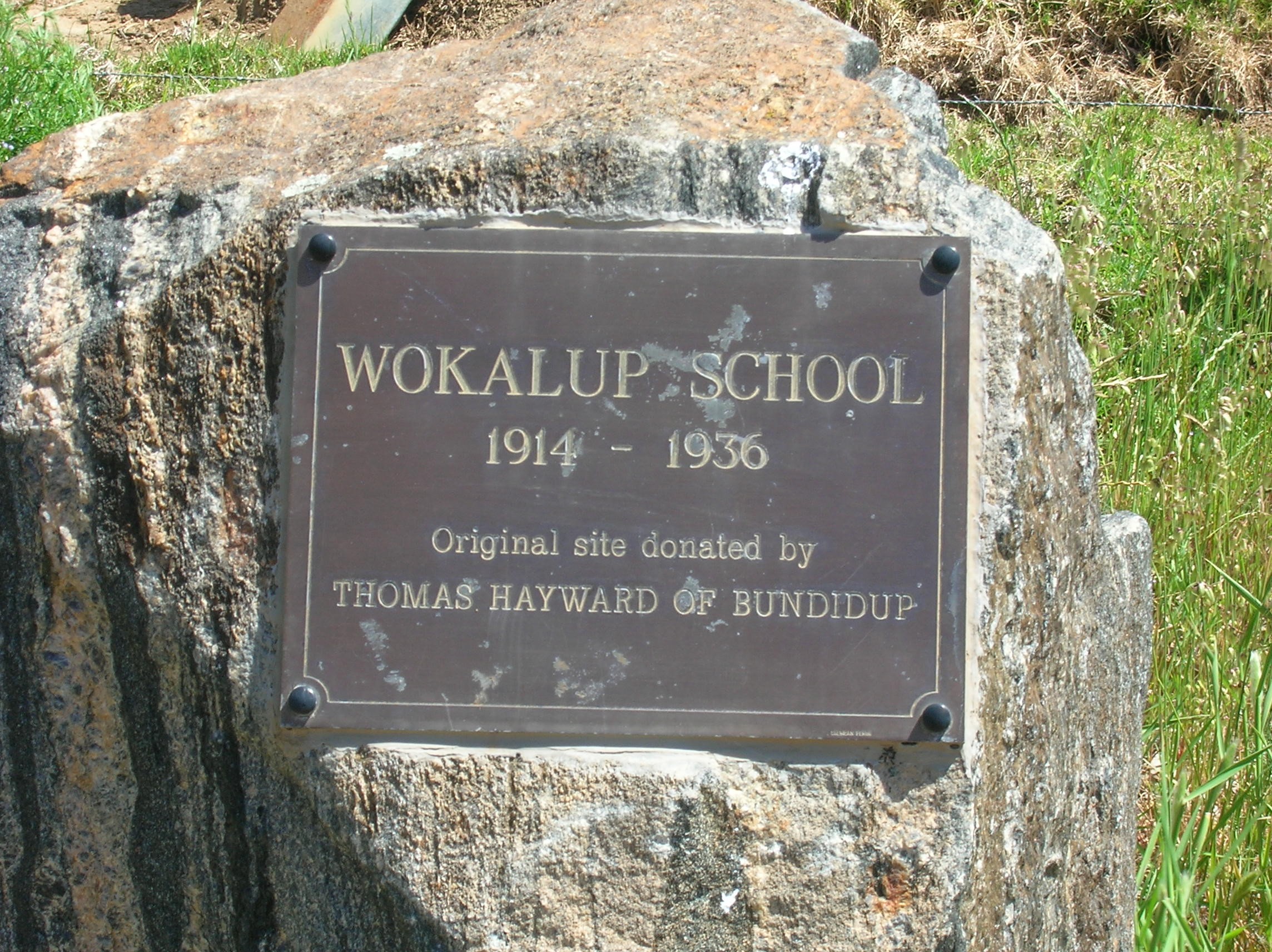