1899     On 25 January, Mr H Smith and Fred Hutchinson, Chairman and Secretary respectively of the Mornington Progress Association, contacted the Hon. HW Venn to intercede on behalf of the mill workers for the establishment of a school.

In the letter, it was suggested that the Education Department authorities pay a rent of £40 per annum for a school building to be erected by Millars’ Karri and Jarrah Forests Ltd, for about 50 children of school age at the mill.

In relaying the request to ‘the Hon the Colonial Secretary Minister of Education’, Mr Venn added that the population would ‘double in a short time’.

On a list headed ‘Proposed School at Mornington Saw Mills’ the following children were named:

Inspector of schools, Mr JH McCollum, stated on 13 March that he saw about 35 children at the Mornington Saw Mill and that the manager, Mr H Smith, had said ‘that in all probability there will be more that 100 children in the locality before six months’.

When Mr McCollum suggested that the company erect a suitable building free of cost to the Department, Mr Smith replied: ‘The matter must be referred to the General Manager, Mr H Teesdale Smith, Palace Hotel, Perth.’

In April, Mr H Smith reiterated that the Department pay an annual rent. The Inspector General of Schools did not agree with this arrangement saying: ‘where [as] all the scholars are the children of the employees of the company, the company should meet the Government by furnishing them with a building free of charge.’

Mr H Smith reported on 15 May that the building of a 32 feet x 22 feet schoolroom was well in hand and that he foresaw the completion on the project in a fortnight. 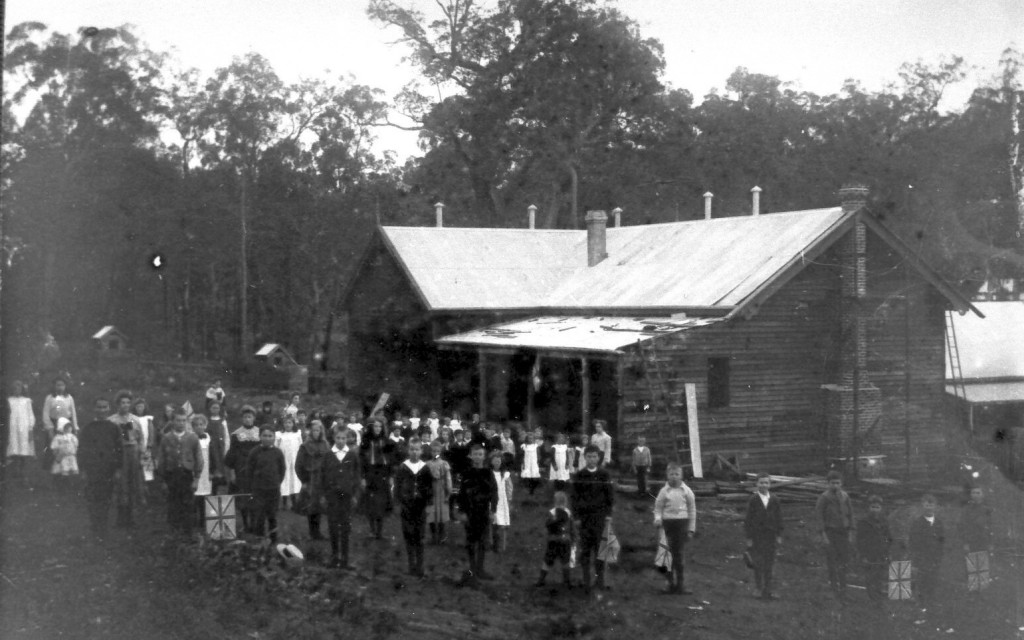 Mornington school before the federation of Australia (note: the children are holding British Empire flags)

Mrs A Macdonald, teacher of Chidlow’s Well School, was appointed teacher of Mornington Mill School. She was instructed to open the new school on 3 July.

Five children’s and three infant’s desks were sent from Perth by rail via Wokalup to Mornington Mill.

On 3 July, Mrs Macdonald sent word that she had commenced duty with 47 children in attendance. For the purpose of insuring the school’s inventory, the school building was described as made of jarrah with a brick work open fireplace and an iron roof.

1901    With the enrolment increasing to 24 boys and 38 girls, extra facilities and accommodation were provided. Teacher’s offices, a cloakroom, and an additional identical classroom were built by the company. School quarters were let to the Department for £25 per annum. The fact that only £20/19/8 was paid in 1901 may indicate that the additions were not ready for occupation until March. 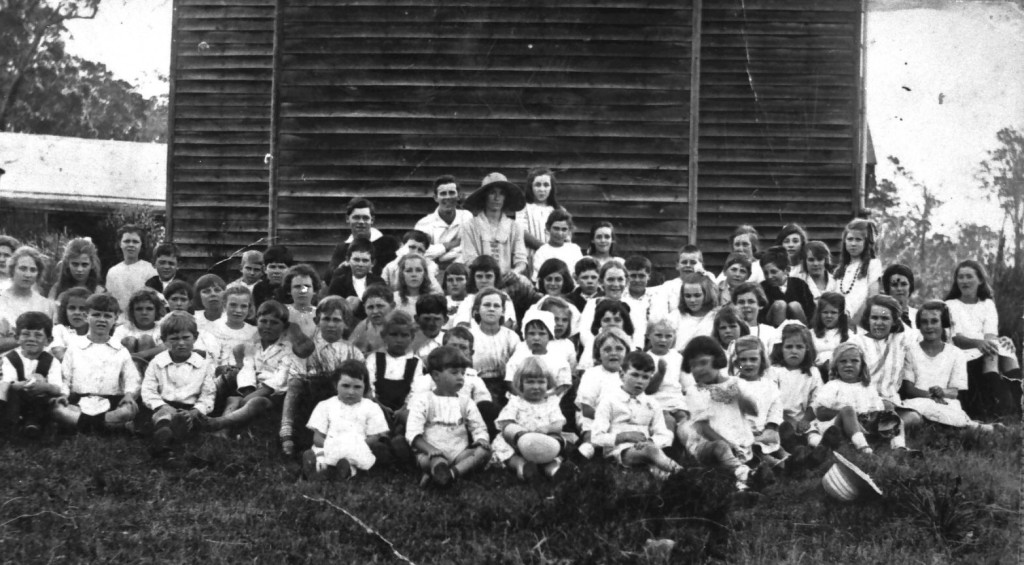 1902    Enrolment 30 boys and 40 girls. One of the classrooms was divided into two teaching areas to accommodate the Infants class by the use of a screen of uprights covered with green baize.

1904    Three monitors assisted the teacher in her task of teaching 75 children.

1914   With an annual average enrolment of 99 pupils the school was conducted by three teachers.

1924    With 116 pupils, the school was staffed by four teachers and one monitor. Teaching took place in the two classrooms (one of which was divided), in a small office and on the open verandah. The school grounds consisted of an acutely sloped and badly broken piece of land scarred by gully erosion. In view of the many accidents, a playground was provided by voluntary labour, the use of Millars timber and equipment and a government grant of £20. The school grounds were drained and graded, swings were installed and a larger 26 feet x 12 feet shelter shed was built.

1928    In July, with classes taught in an open-sided shelter shed and on an open verandah, the head teacher, Mr LH Nicholls, moved into the local hall (45 feet x 29 feet). Within a month, the company had built another classroom on to the existing school for £200 for which an additional yearly rent of £25 was charged.

1942    The teacher’s quarters, to the west of and adjacent to the school, was described as a six roomed cottage and was let for six shillings per week with wood and water free.

1948   In his report on the condition of the playground at Mornington Mill State School, Mr Bernard T Clarke, headmaster, wrote: ‘The schoolyard is on the side of a hill, and the steep, gravelly slope is a real danger. Physical training is restricted and the boys have to be taken a mile away for sport. Injuries, so far only minor, are frequent.’

1963   The parents rejected the question of consolidation with Harvey Primary School. Only one parent was in favour.

1965    When urged by the Health Authorities and the Shire of Harvey to replace the school’s privies with latrines connected to a septic tank, the Education Department was required to comply with the order, notwithstanding the fact that the school’s enrolment had dropped to 25 and that the mill was winding down its operations. J Newby and Sons of Harvey installed the new toilet facility at a cost of £2,500.

The Department’s decision was pre-empted by the announcement that Millars’ Timber and Trading Co. Ltd would transfer its milling operations from Mornington to Yarloop on 1 July.

1966    Mornington Mill Primary School was closed on 16 December. The school’s inventory was sent to Yarloop.

Mrs Christie attended the Mornington Mill School from 1933 – 1939. Her parents, Mabel and William Robinson, had come from Victoria but she spent all her childhood at Mornington. She only occasionally sees some of her school friends, but can remember Shirley and John Higgins, Mary Shalders, Jean Read Gavin Anderson, Kath Childs, Viv Morton, Phil Shalders, Frank Read, Chris Anderson, Rene Childs, Ernie Shalders, Ron and Alan Sirr and Ted Childs.

The Mortons lived at ‘Brooklands’, Mornington Mill. Viv’s parents, Edith and Frederick Morton, had come from Tendon, England and settled on a small farm near Mornington. The children walked through the bush to school and never wore shoes. They always took a cut lunch, as it was too far to go home for the midday meal. He remembers a few of the teachers. These were: Mr and Mrs Arnott, Mr Hardwick, Mr Nicholls, Mr Smart, Miss Schurack, Miss Rowe and Mr Sanders. Among the children he remembers were Puss Read, Greta Shalders, Hilda Appleton, Mary Newman, Alma Rutherford, Bruce Davis, Roy Buck and Les Sanguinette. He occasionally sees some of these old friends, and saw some at the ‘Back to Mornington’ days held in the past few years.

Mrs McNerney’s grandparents were the Mortons of Mornington, her family name was Lewis. She attended the school from 1936 to 1945 and spent all her childhood at Mornington. They lived on a farm about two miles from the town, and when she first began school she had to walk in or get ‘dinked’ by her Uncle (Morton) on his bike. Rather than go so far home for lunch, she took a cut lunch. All her clothes had been made by her mother, until she was nine or ten years old she had never had ‘bought’ clothes. It was a great thrill for her when her mother returned from a trip to Perth and brought her new winter clothes, which she had bought. The main school lessons remembered are a lot of copybook writing, which they had to do, and of reading aloud every day.