The first irrigation water conservation scheme in Western Australia was the lower dam on the Harvey River, officially opened by the then Governor of the State, Sir Harry Barron, on 21st June 1916. This was designed to impound 520,000 gallons of water, the wall being later raised to increase the storage to the present capacity of 2,250,000 gallons.

The water originally impounded was intended to irrigate about 3,000 acres of citrus land at Harvey with three 4-inch waterings a season, and was adequate for that purpose. However, with the failure of citrus growing, this area, as well as adjacent districts to the north and south of it, commenced a rapid and profitable development of the dairying industry. More water was then demanded for summer irrigation of pastures, and research by the Agriculture Department in the development of the more suitable types of grass accentuated this demand.

Successive Governments, realizing the benefits to accrue from such undertakings, authorised the construction of additional reservoirs until at this date a total of 25,000 million gallons of water are stored at various points in the ranges east of Waroona, Harvey, and Dardanup. In summer this water gravitates through 324 miles of earth and cement channels to spread its wealth over 25,000 acres of some of the most fertile land in Western Australia. 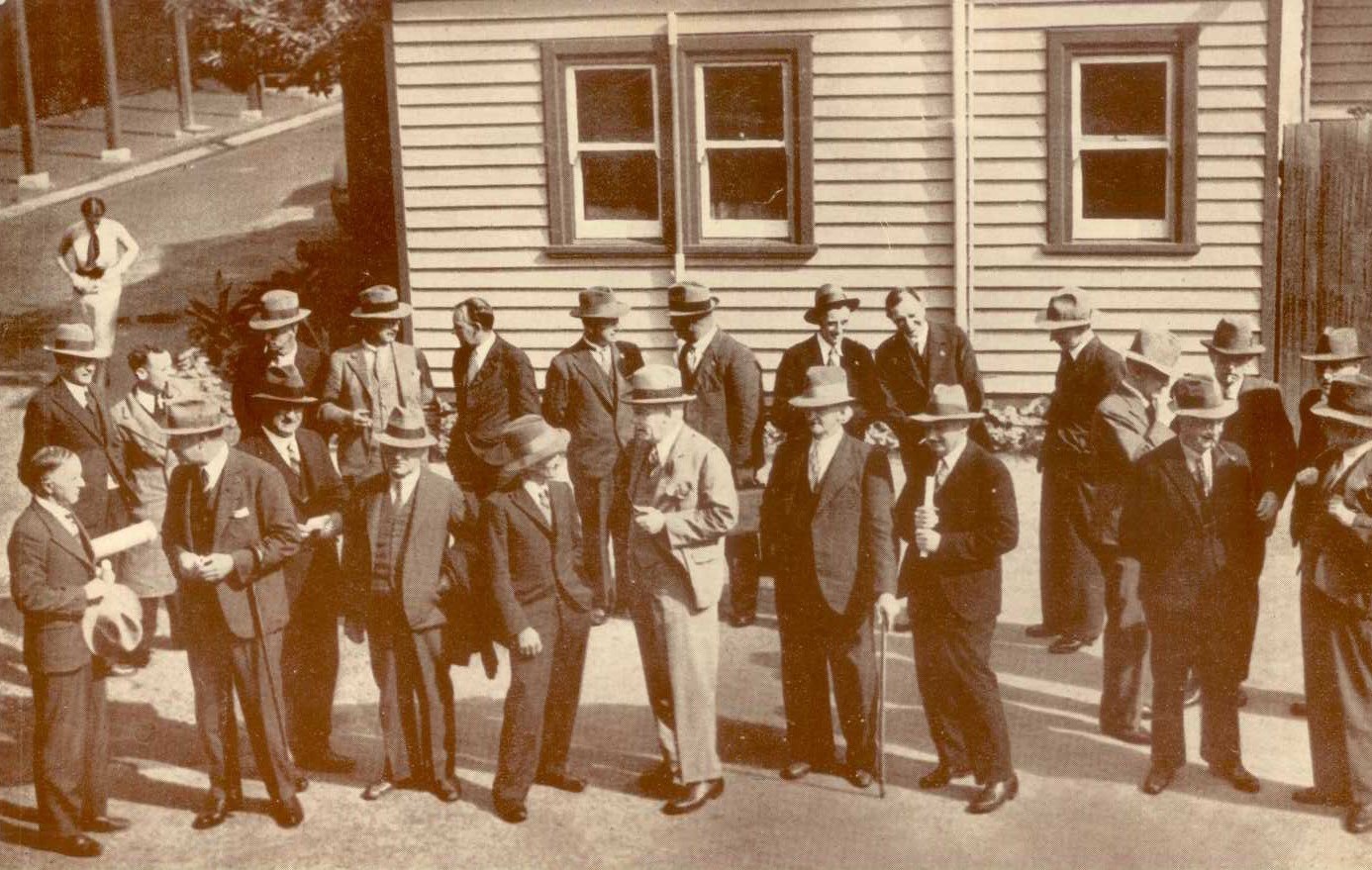 Deputation to the Minister for Works, Hon. A.R.G. Hawke, on 7 May 1937, to represent the ‘case’ for building Stirling Dam.

In 1841 Sir James Stirling, first Governor of Western Australia, selected 12,800 acres in the Harvey River Valley and built for himself a holiday residence on the river slightly east of the present townsite. The relics of this building still stand. It is therefore fitting that the name should be perpetuated in Stirling Dam.

Situated on the Harvey River 10 miles east of the town, the site of the dam was first surveyed in 1911. Test borings and clearing were begun in January 1940. The design was that of a water impervious concrete core three feet thick from bed-rock level 100 feet underground to 3 feet above natural ground surface, and from there a further core of pug to within 58 feet of the crest. The retaining wall, containing 626,000 cubic yards of material, rises 150 feet from bed level, and impounds 12,000,000,000 gallons of water. It is the highest earth dam in Australia, second only in capacity in Western Australia to Canning Dam. The wall is 950 feet long across the crest and 24 feet wide. At the bottom it is 850 feet wide. The basin covers 1,000 acres.

Before construction of the retaining wall could be commenced it was necessary to divert the river flow, and this was accomplished by drilling and excavating a tunnel 12 to 14 feet in diameter and 1,100 feet long through the hillside on the southern side of the river. In November 1940 the river was flowing through this tunnel.

The war caused cessation of work in January 1942. Construction was recommenced in October 1945, but the real effort to complete the job was scheduled for September 1946. It was a spectacular effort, planned with all the care and precision of a major military undertaking. It involved the greatest concentration of mechanism that Western Australia has yet seen for a peacetime project, plus 600 men with their wives and children. On zero day men and machines went into action on a programme that had been planned to the minutest detail, and that orderliness and precision were strictly adhered to until the work was completed.

Work continued in two shifts from 7:30a.m. until 2a.m. the next morning, under powerful electric lights when daylight failed. The twelve massive bulldozers, worth £40,000, roared with their 900 h.p. day and night, while the steam and diesel navvies, scrapers, scoops and sheepsfoot rollers dug, carried, spread and rolled earth faster than earth has ever been shifted in Australia. Between September 1946 and March 1947, 500,000 tons of earth, together with132,000 tons of pug, gravel and stone were displaced and moved to the bank. Between the finishing of the 2a.m. shift and the commencement of work at 7:30a.m., fitters overhauled and repaired the various mechanical units.

Most important agents in the work were the 600 men who laboured that the dam might be built, and then departed. Many brought their wives and families with them and a canvas town sprang up. Some were accommodated for meals in the boarding house, which at one time served 300 men, while others “batched.” A café and a well-stocked grocery store were run by private enterprise. The education department provided a schoolmaster, and an Infant Health Clinic was established for the many babies in the camp.

Today, Stirling Dam stands as a monument to the engineering ability of the Public Works Department of Western Australia; a memorial to the wisdom of the Government who sanctioned its construction and a credit to the men who built it. It will supply irrigation water to an additional 10,000 acres of land north of Harvey to link up with the area served by the Drakesbrook Reservoirs, and southwards to join with the water channels from the Wellington Dam.

In the past, irrigation has substantially increased the wealth and population of a large area of the South-West. It has tended to break up large holdings, and to create ideal closer-settlement conditions. This in turn has resulted in the rapid growth of prosperous towns, served by every business and social amenity. A prosperous agricultural population, living under congenial climatic and social conditions, is undoubtedly the most valuable assert a nation can have, and Stirling Dam will consolidate and increase an asset already created.