On Tuesday, at the Old Men’s Home, Claremont, a unique birthday party, with cake and all, was held. The festivities were in honor of the 100th anniversary of Edward Fox’s natal day. Born in Nottingham on May 24, 1832, Edward came to Western Australia in ’69 in the “good ship Norwood.” The handsome 3-decker cake that bedecked the festive board, was the gift of Mills and Ware, of Fremantle, and in addition, Mr. Fox was the recipient of hundreds of messages of congratulations.[1]

Later it was found that Edward Fox was actually a year older than he thought. He lived on to celebrate his 104th birthday in 1936. Journalists were keen to spend time with him and learn the secrets of a long life. An interview when he celebrated his 104th birthday gives a general outline of his life – 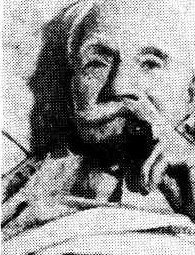 A Year More than he Thought.

Mr. ‘Daddy’ Fox, of the Old Men’s Home, Dalkeith, who is believed to be the oldest man in the State, was born on May 24, 1831, not a year later as he has always imagined, according to a letter received by the superintendent of the home (Mr. A. C. Rust) from the parish clerk of St. Mary’s Church, Nottingham.

The letter proves that the name under which Mr. Fox was christened is not Edward, as he has always believed it to be, but Edmund. He is a son of Robert and Elizabeth Fox, of Swinton, Nottingham. His grandmother, the letter states, lived until she was 106 years old, and his father was a Quaker. Mr. Fox’s confusion regarding the date of his birth arose from the fact that he was baptised in St. Mary’s Church, Nottingham in 1832.

Mr. Rust said on Saturday that, despite his 104 years, Mr. Fox retained all his faculties. He was confined to his bed in the hospital of the home owing to injuries received to his pelvis when a hit-and-run motorist knocked him down about nine years ago. He was looking forward to celebrating his 105th birthday. He had a daughter, Mrs. Lucy Sanders, now residing at 45 Helena-street, Guildford, but his wife died some years ago.

He had a good appetite for all kinds of food and enjoyed a pipe and a glass of wine daily. He had been at the home for 15 years. Coming to Western Australia at an early age, Mr. Fox worked for a Mr. King at Guildford. Later he went to Pinjarra and was employed by a Mr. Bateman.

A romance developed between him and Mr. Bateman’s daughter Emily and when he was 30 years old they were married. Subsequently, after working in Perth, he went to Albany where he set up in business at his trade of shoemaker. But shoemaking did not prove either pleasant or lucrative and he secured employment as a hod-carrier when the Albany Town Hall and Knight’s Buildings were erected. After that he set up business as a shoemaker opposite the Premier Hotel, Albany. He joined the Salvation Army, became a colour-sergeant and remained with the organisation for about 12 years. He left Albany in 1905 and went to Bellevue where he again started a boot-making business. Being unsuccessful in this, he took up gardening at Guildford.[2]

The only part of his life that Mr. Fox didn’t discuss, or was not prepared to disclose, was the fact that he was sent to Western Australia as a convict, arriving in Fremantle on board the Norwood in 1869, following several convictions for stealing in the Nottingham area, under various aliases. Using an alias was a common practice in those days, especially in large cities such as London, where the chance of recognition was low. Criminals were aware that sentences were cumulative in those days.

Fox’s crimes back in England were not serious cases, but all came into consideration when it was decided that he should spend seven years’ penal servitude in WA. His prior convictions were recorded as:

In 1864 Edward Fox was found guilty of stealing a sovereign from the pocket of Henry Renshaw, a turnkey in the house of correction at Southwell, where Fox was a prisoner and had access to the room of the prosecutor for the purpose of making his bed. This was the fifth conviction against him and he was sentenced to seven years’ transportation.[3]

There was no-one called Edward Fox on either the 1862 or the 1867 passenger lists of the Norwood. There is, however, a man named Thomas King, listed as ‘aka Fox’ in the 1867 list. He was from Newark-on-Trent, in Nottinghamshire –

Thomas King (aka Edward Fox) was received on board the Norwood on 14 July 1867 from Chatham Prison, described as a shoemaker, aged 26, single, who could read and write, and was a Protestant. Convicted on 24 October 1864 at Newark-on-Trent of larceny, with previous convictions, he was sentenced to seven years’ penal servitude. His next-of-kin was listed as his sister Mary Anne, of 8 Castlegate, Notts. An addition to probation of 268 days prescribed in the shipping list indicates good behaviour on the voyage.

His physical description reads as follows: Thomas King (alias Edward Fox, &c., &c., &c.), height 5’2, brown hair, grey eyes, a round face, a fresh complexion and stout. His tattoos were plentiful, with a sailor, a coat of arms, two anchors and a fighting man on right arm, and a crucifix, the body of man with pipe, initials T. J. and T. F., 1862, a sailor with flag, and some dots and stars on his left arm.[5]

He changed his name back to Edward Fox when in WA, although it was later found that he was christened ‘Edmund’. Apart from a few misdemeanors in the early years, his record in Western Australia was good:

4 March 1868 at Swan – Creating a disturbance by throwing away his meat, saying that it was not fit to eat – 3 months’ hard labour at Depot.

Edward Fox married Emily Bateman at Pinjarra in 1873. She was the daughter of his employer, bootmaker William Calverley Bateman, an ex-convict (No. 6238), who arrived in the colony in 1862 on an earlier voyage of the Norwood. Edward and Emily Fox had seven children, listed as follows:

Edward’s wife, Emily Fox of South Guildford, passed away on 9 October 1915, at the age of 64 years.[7] Her husband was to outlive her by more than 20 years, dying at the age of 104½ years at the Old Men’s Home in Dalkeith. At the time he was said to be the oldest man in Western Australia. Before he lapsed into unconsciousness, Mr. Fox remembered his wife who died about 20 years ago. Raising his hands, he said: ‘Mother, mother, I will soon be with you. I am coming.’ [8]

He was buried in the Methodist Cemetery at Guildford.[9]