John Charles Malone drove from New South Wales to Western Australia during the Depression of the 1930s. He found work in a men’s clothing retail store somewhere in a wheatbelt town, possibly York. There he met Mavis Frearson who was keen to get out of the wheatbelt and who found a job in haberdashery in Woolworths in Perth. John, obviously captivated, visited her there and often drove to Bunbury when Mavis was put in charge of the haberdashery department of a newly-opened Woolworths store. Mavis fell in love with the green South West and vowed that she would only marry John if they could live in that area. John agreed, but war was imminent and he joined up just before the wedding. During the war John trained troops in surveying and orientation in army camps in Northam and Narrogin. Mavis, soon pregnant, lived with friends in both of those towns. However, after the war her dearest wish was granted and John Charles drove her to several South West towns where he felt that he could ply his trade as a tailor and men’s clothing retailer. The couple soon settled on Harvey where a suitable shop with living quarters attached was found. My mother always said that there was an equally good business proposition in Manjimup, but the day the couple visited it rained without let up. ‘So many dripping trees everywhere!’ she said, ‘I really didn’t fancy that.’ Maybe Manjimup was just too different to the wheatbelt.

The Malones soon settled into the post-war Harvey community with its rationing, returning servicemen and many newly arrived settlers from Europe. Often the so called ‘New Australians’ appreciated John’s taste in shirts, sweaters and shoes much more than the resident farming community. A vet from Austria, Mr Milos Trtica, was encouraged by John to buy outfits that would make him look ‘more Australian’ since his job required him to mix mostly with the farmers. Another tale told is of a young man who was keen to get hold of one of the newly introduced jock straps for sporting blokes. He went to JC’s shop where he was shown a whole box full of jockstraps. All were too small. ‘What will I do?’ wailed the would-be buyer, ‘Well, young man,’ said JC looking over the top of his glasses, ‘if I were you, I would go round to the Co-op and try on an onion bag!’ 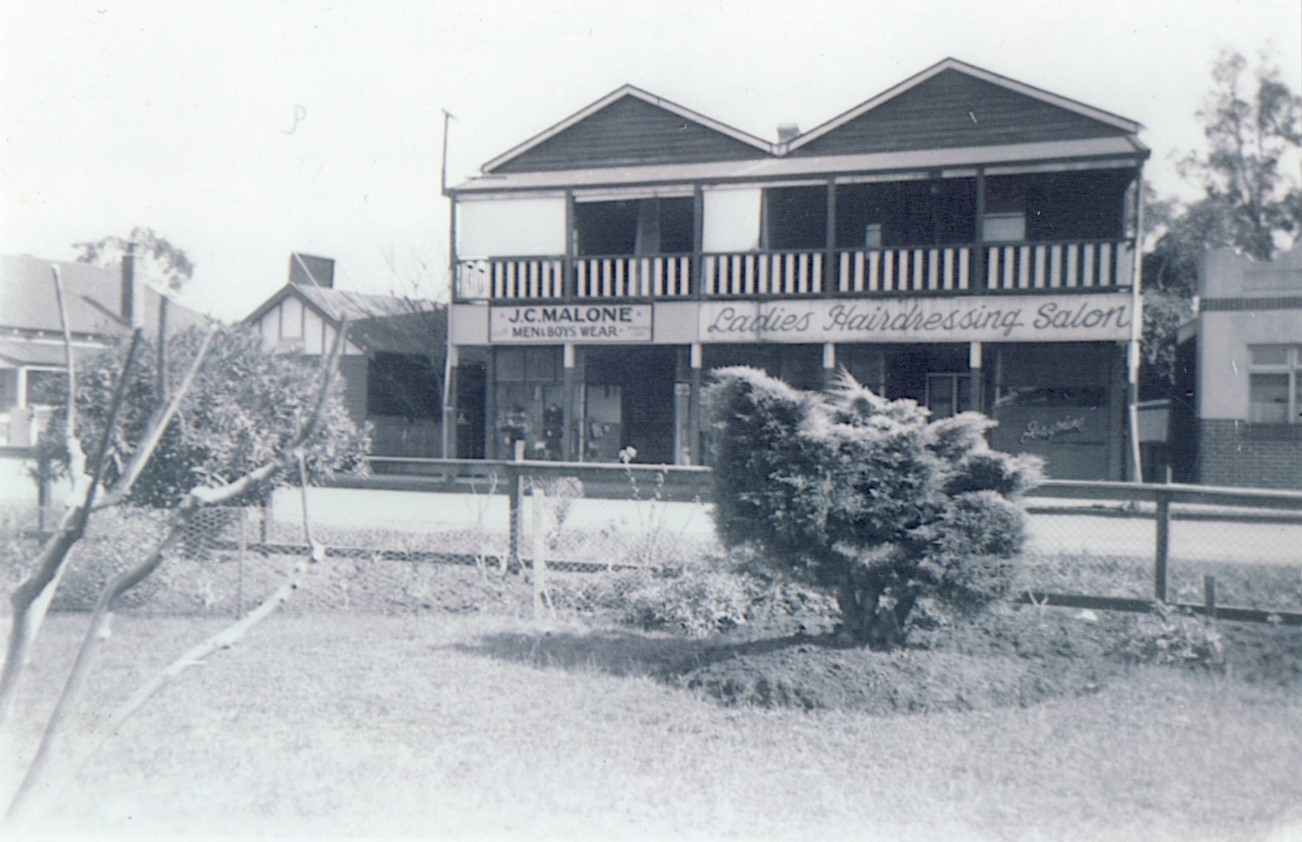 Bills were sometimes paid in produce – boxes of pears or oranges or bags of potatoes. As the standard of living improved so John’s business thrived, though slowly at first. When I was a small child I always wondered what ‘Mum, the wolf is at the door this month!’ meant, thinking that wild animals might be stalking in the dark, but by the time I reached ten or eleven my younger sister Deidre and I no longer heard those words. John’s shop was extended as his business grew and when I was about 12 the family was even able to make the old dunny redundant and have a septic tank with a flushing loo installed. Mavis was very worried that it might be too close to the house. Of course, the old pan loo was way down the bottom of the backyard, partly to facilitate the collection of the pan by the ‘dunny cart’ which visited at night once a week and partly probably so that the smell was well away from the house.

Mavis and John loved dancing and Harvey presented many opportunities with dances and balls. John especially was a very competent dancer and gave exhibitions of the new dances. His idol was naturally Fred Astaire. Mavis joined the Harvey Repertory Society where she was a great favourite in comic roles. I believe that several rehearsals practically fell apart as those not on stage as well as those acting laughed themselves silly at Mavis’s antics. I do not recall all those wonderful and talented people who gave Harvey such great entertainment in the Town Hall, but May Beauclarke, as director, does come to mind as she was much respected in that role. Later the Choral Society took advantage of some wonderful singing talent in and around our town. Concerts were given in the Town Hall. One presentation I remember particularly well was Grahame Sharp singing ‘Pedro the Fisherman’ in his fine tenor voice. He was probably singing to Ray Paganini, a talented soprano. Pop Newby was the conductor of the concerts and an all-round inspiration.

John and Mavis were also keen on various sports. Both played hockey in the early days, but John loved tennis best and with a keen group of fellow players was determined that Harvey should have grass courts. He and others, including Vince Waddingham, lobbied the Shire to grant suitable land in the town. Then the laying down began and as often the case in country towns help came from all quarters. I was horribly embarrassed when a mate nudged my arm one afternoon. ‘Look,’ she said, ‘there goes Johnnie on your bike, round to change the sprinklers on the tennis courts!’ No automatic reticulation in those days, but there were helpers including a teenaged Neville Pinner. John, or JC as he was known to his mates is commemorated at the Harvey Tennis Club Pavilion which is named in his honour. How proud he would be to know that!

Mavis’s passion, once we girls were off her hands, was golf. She and many of the ladies of the town played in the hills on Mr Stanton’s course. As well as the golf there was a very active social calendar at the club. The ladies, naturally for the time, keeping well out of the way of the men’s activities, but all having a fine time at the bar after play. Mavis was, for some time Ladies’ President of the club. She is remembered as a lively, friendly and amusing President who always had a smile and could put on a theatrical skit at the drop of a hat, often enticing others to join in. A photograph we still have shows Mrs Stimson, Jean Grieves, Greta Jensen, Marge Eckersley, Jessie Hester and many other well-known ladies ‘about town’ at the time, lined up in their best winter gear. Very fifties!

The shop/house was one of a pair of joined-together two-storey structures in Hayward Street. During the 40’s and 50’s Hayward Street was a hive of activity with two bootmakers, a newsagents and a grocery shop next to the Post Office (built in 1957) on the corner of Hayward and Gibbs Street. The grocery store was run by the Joneses, Mrs Edie Jones officiating. She would take paper bags to shovel flour or rice out of sacks stacked in the dark back of the shop. No plastic then and the wrapping paper from deli items like ham was cut up at home to go as loo paper. Marzo’s shop and tailoring was next door. Like most of the shops, including the Malone establishment, there were living quarters behind – a boon to those wanting to set up a retail business on the little money around after the war. There was a bank close to our shop. This was managed by Mr Nettle who was instrumental, along with others including Mr Ball the lawyer whose office was in the street, in getting Government permission for the settlement at Binningup. ‘Chooky’ Fowler the jeweller, who had a window full of gold and silver wonders, was further along towards Uduc Road.

All the buildings were pre-war, but the one we lived in with its matching neighbour, seemed oldest of all. The bedrooms with their jarrah-panelled walls were on the upper storey. A balcony hung over the street and shopfront, which since it faced east, caught morning sun in the winter but blessed shade on hot Harvey afternoons. Many customers came toward closing time in the summer as the shop was a cool haven. When nights were unbearable Mavis and John decamped to the balcony to sleep. On rainy days kids could play there away from the eyes of adults. It was sad that the buildings had to go but I believe that the white ants did for them. Such neglect of our history is sadly too common.

John and Mavis eventually purchased the block next door and a fit-for-purpose modern shop was built in either 1965 or 1967. I was saddened to see that the huge, ornate silver till had to go, as well as the polished jarrah counter, but John and Mavis were understandably proud of the ‘New Shop’ with its modern fittings. They were fortunate to have two loyal and trustworthy employees in Len and Verna Carroll who looked after the business admirably while Mavis and John fulfilled a lifetime ambition of a trip around the world. 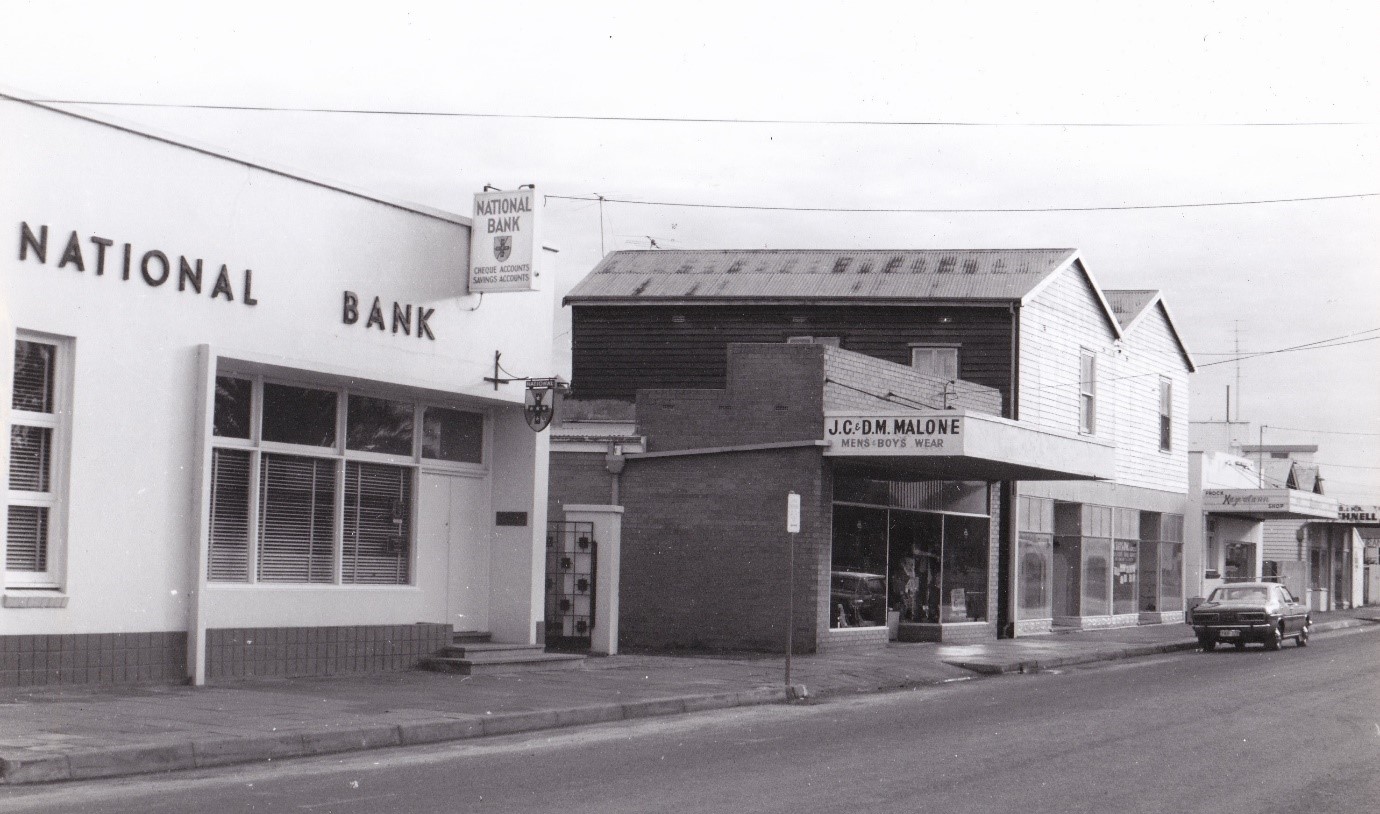 John sadly died in 1974 without ever really retiring, which is the way he would have wanted it, though with the onset of angina he had increasingly taken it easy and relied heavily on Len. Mavis was advised to hang on to the business ‘JC and DM Malone Men’s and Boys’ Wear’ and although she had not had a great deal of experience on the business side, with the help of the Carrolls she managed JC’s legacy well. Mavis joined the Harvey Business Women’s Association which taught her much about business and she enjoyed the social outings and the company of other female businesswomen of the town, such as Alma Pilkington. By the early 80’s it was time to sell and move on. The Harvey Thrift Shop now inhabits the ‘new shop’ and the old one has gone forever, though an accurate and very lovely watercolour of the old buildings painted by Roddy Waller can be seen on the wall of the Hayward Street Real Estate Agency of Mr Carlo Celisano. 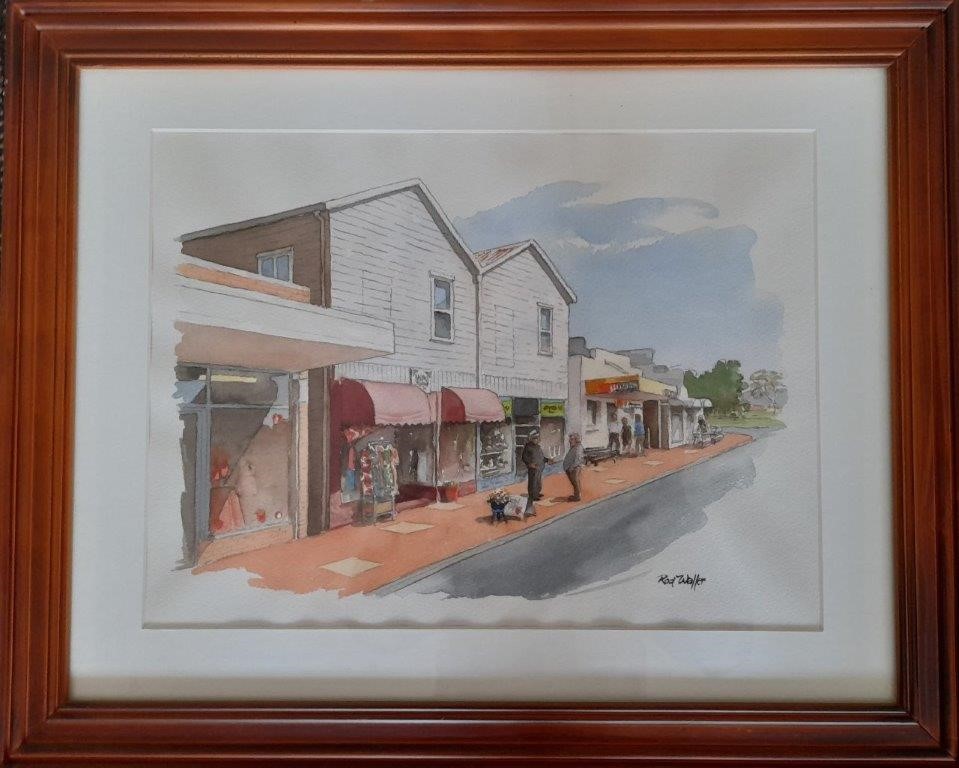 Rod Waller made the painting from a photo. The man on the left in the hat is Dom Celisano and the man in the doorway under the LJ Hooker sign is Carlo Celisano. Courtesy of Carlo Celisano, LJ Hooker, Harvey. 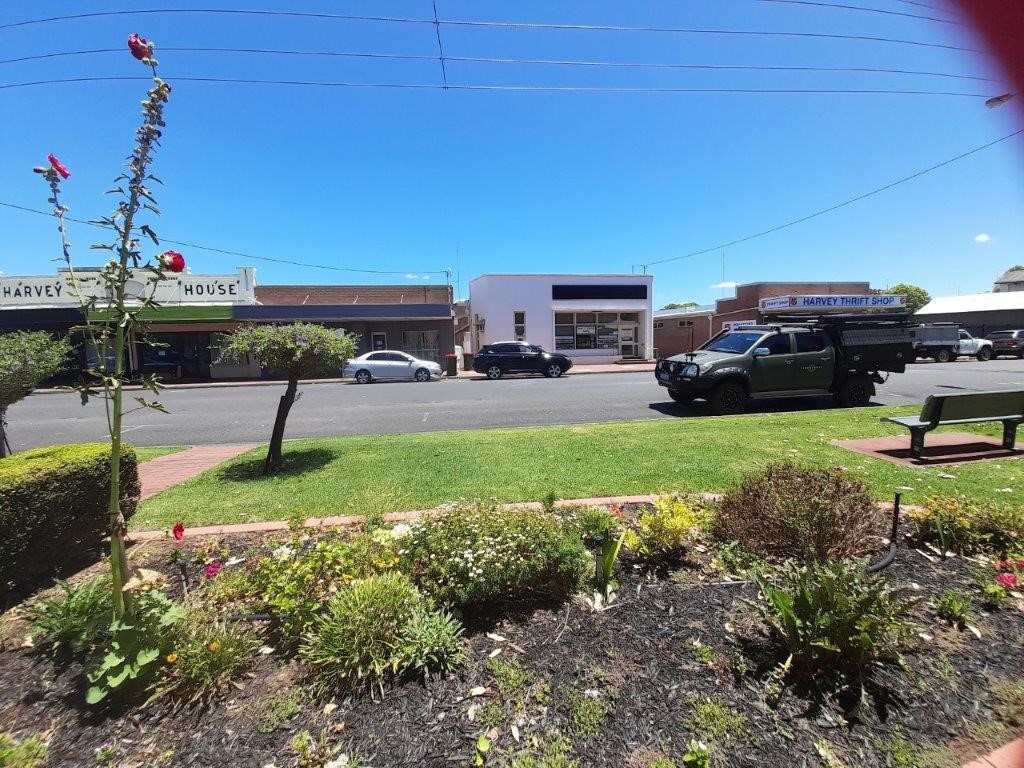 John Charles Malone began life as the youngest of six children in a poverty-stricken household in Wagga Wagga, New South Wales. He was entirely justified in believing that he had had a most fortunate and fulfilling life and that Harvey had treated him and his family with wonderful generosity.