Richard Fraser, born in Scotland c1832, was convicted at a General Court Martial at St George’s, Bermuda, of feloniously wounding his Superior Officer, Sergeant Robert Waugh. He was sentenced to transportation for life.[1] It was a vicious and probably premeditated attack, with two severe wounds to the throat, inflicted with a razor. Fraser was a Scotsman, formerly a silversmith and latterly a soldier. He was a single man, the son of Richard Fraser of 37 Frederick Street, Edinburgh. He had one previous conviction at a Court Martial for drunkenness, which earned him a sentence of 21 days imprisonment.[2]

Richard Fraser was not the only former soldier to be sent as a convict to Western Australia. Others were found guilty of attacking their superior officers, a sign of desperation and rebellion against the harsh discipline administered to those who broke the rules. Deserters were tracked down rigorously and penalties at Courts Martial were harsh. Many soldiers regretted their decision to join the military, and took desperate measures to escape the conditions which were frequently said to be worse than those experienced in prison. Recruitment into the military meant signing up for many years of service. Resignation was not an option. Troops could be sent to any part of the Empire and frequently faced crowded and unsanitary conditions. Two meals a day of dry bread and boiled salted meat, were the standard. Unlike officers, wives of soldiers were generally not permitted to accompany their husbands to outposts. The term ‘shilling a day’ referred to the low rate of pay for troops in the mid-19th century.

Fraser was placed in Separate Confinement at St George’s in Bermuda for 21 days, before being sent on 15 September 1856 to Millbank Prison in Westminster, London, now the site of the Tate Gallery. This prison, built in an unhealthy, low-lying position on the bank of the Thames, was of a panopticon design, which allowed constant oversight by prison guards. The prison was used for prisoners awaiting transportation. They were subjected to Separate Confinement within their cells, based on the theory that they needed to contemplate their misdeeds. Fraser endured 12 months and 17 days isolated in his cell at Millbank. No wonder his conduct there was recorded as ‘Bad’! 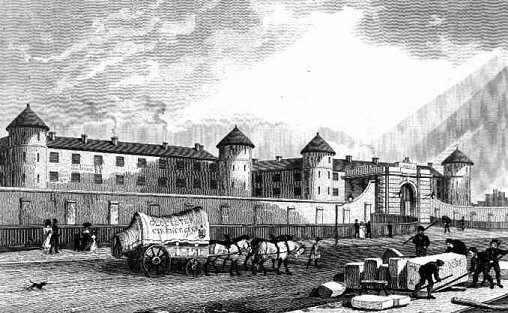 On 2 October 1857 Fraser was taken from there to Portsmouth Prison in Hampshire, where he spent a total of one year, seven months and 28 days, mostly at Public Works, awaiting transportation.[4] His character was described as ‘Bad’ in Separate Confinement and at Public Works.[5]

On 1 June 1858 he arrived at Fremantle, Western Australia, onboard the Lord Raglan, his conduct recorded as ‘Bad’ during the voyage. It was recorded that he could read and write, having previously attended Sunday School, but had made no progress at classes during the voyage, indicating an uncooperative attitude.[6]

His physical description was 26 years of age, height 5’5”, with brown hair, light hazel eyes, a long face, sallow complexion, and middling stout. His markings were the initials ‘R.F.’ and an indistinct anchor on his left arm, and a ring on the second finger of his left hand. He was a single man, a silversmith by trade, of Protestant religion.[7]

His Record in WA

With his record of past bad behaviour, Richard Fraser would have been carefully watched. He obviously had a severe drinking problem –

3/3/65 – PM Perth – Drunk & Disorderly and using threatening language – Six months. To be detained at least six months in consequence of threatening revenge on the police.  (Vide 4939/2)

His Employment in WA

Note: In 1865 Richard Fraser was one of the prisoners in the Bunbury Lock-up who gave evidence in Perth for the defendant in the Supreme Court case of former convict William Proctor v. George Eliot, JP, James Moore, Joseph Bovell, and constable William Dale, for false imprisonment of the plaintive.[15] [See Harvey History Online website for William Proctor’s story.]

On 10 August 1870 Fraser received his Conditional Pardon at Newcastle (now known as Toodyay).[16] He seems to have remained in the Toodyay area.

On 15 July 1886, Richard Fraser was found dead at Newcastle. (His place of death was Wongamine.) The official cause of death was poisoning by opium.[18] The WA Police Gazette gives some details of the Coroner’s Report —

A newspaper report gives more details of the tragic event –

UNDER date 19th inst, a Newcastle correspondent writes: – A man named Richard Fraser, living at Wongannie, [Wongamine] died on Thursday the 15th through taking an overdose of opium and chlorodyne. The jury returned a verdict to that effect. The Church of England minister refused to read the burial service over him. The deceased had had his coffin all ready for him during the last four years. His hut was robbed afterwards.[20]

He was buried in the Toodyay Public Cemetery.[22]

The Government Blue Book of 1888 includes Richard Fraser’s name in a list of Intestate Estates paid into the Treasury. Its value was £6/15/6d.[23]