Cousins, George Burrows and Henry Burrows, settled in Harvey and became farmers. George arrived in Harvey in 1891 and Henry followed him in 1913.

George Burrows is known to Harvey history as the shepherd on the Harvey Estate or Stirling’s Estate.[1] George and his wife Mary were long-time residents of the town, from their arrival in 1891 to their deaths – George in 1932 and Mary in 1940.

George Burrows was born in Muston, Leicestershire, England in 1840. At the time of the 1891 census, George, an agricultural labourer, was living with his wife Mary and their nine-year old daughter Annie, at 2 Beasley Farm, Casthorpe, Barrowby, in Lincolnshire. Soon afterwards the family migrated to Western Australia on the Charlotte Padbury.

George found work in Harvey, employed as a shepherd on the Harvey and Hayward Estate (formerly Wellington Location 50A, the estate of Sir James Stirling).[2] They lived in the cottage there variously known as ‘The Hut’ or ‘The Homestead’ and in later years ‘The Old Homestead’.[3]

In 1890 two thousand acres of the south west portion of the Harvey and Hayward Estate was being subdivided to attract new investors, drawn to the growing prosperity of the colony and by the promise of a railway to Perth.[4] George Burrows and George Guppy, a fellow Charlotte Padbury passenger, purchased – date unknown – Lot 21 of 265 acres which lay along the Wokalup Brook, and eventually divided it between them.[5] 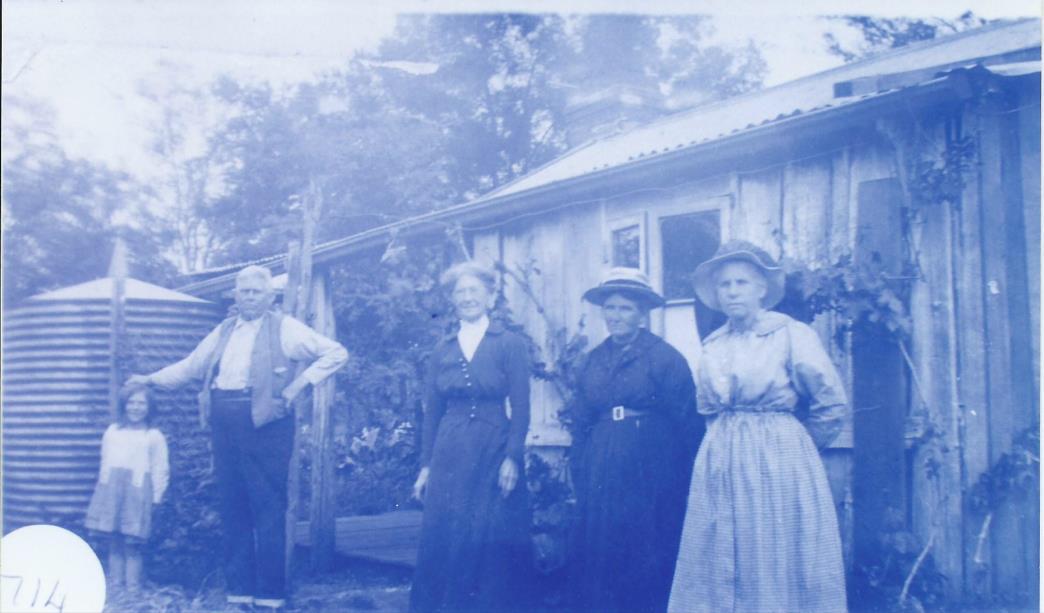 Mary and George on their Wokalup Brook farm with members of the Guppy family, Alice Guppy is the young girl.

It is unclear when George stopped being an employee and became a farmer in his own right. In the electoral rolls of 1903 and 1906 he is listed as a labourer, while in the 1916 and subsequent rolls he is listed as George Casthorpe Burrows (with his wife, Mary Casthorpe Burrows) with his occupation listed as farmer. In 1914, George’s farm was up for sale, described as 93½ acres of first-class land with about 20 chains frontage to the Wokalup River and a comfortable cottage, stable and sheds. It was suggested that this property would make an ideal dairy farm.[6]

In his latter years George lived with his wife in a cottage on ‘Esperanza‘, the property of RA Johnson near Harvey.[7] Both lived to a ripe old age, with George dying in 1932 at the age of 92 and Mary passing away in 1940, at the age of 94.[8] She bequeathed a legacy to the Harvey Hospital which was used to build an operating theatre.[9] Nothing more is known of their daughter Annie.

George’s cousin, Henry Burrows was born on Christmas Day 1853, to James and Sarah Burrows in the small Lincolnshire village of Hackthorn. Henry’s father at this time was employed as a husbandman or groundkeeper on a large agricultural estate at Hackthorn, on the farm called ‘Hackthorn Cliff’ in the county of Lincolnshire, England.

Henry’s father James became a farmer in his own right in the late 1860s, in a small hamlet called Broadholme next to the Foss Dyke, an ancient Roman waterway connecting the city of Lincoln to the Trent River. Their son Henry worked on the farm until his marriage in 1881 to Anne Elizabeth Hill, who was living in Saxilby at the time of her marriage. Once married, the two families moved to ‘Enfield Farm’ in Harby, located on the Lincolnshire and Nottinghamshire border. After the birth of two children, one who remains in the Harby graveyard, Henry and his family relocated to the town of Worksop in Nottinghamshire, about twenty kilometres from his parents’ farm. He had decided to become a coal merchant, taking advantage of the changing structure of the English economy and the rapid advancement in the use of coal both domestically and industrially.

The coal business was good to Henry and his family enjoyed a comfortable middle-class existence in this bustling town, where seven more children were born. Between the years of 1884 to 1898 Henry and Annie brought nine children into this world – but by 1909 they were left with only four surviving children. Consumption was the culprit, taking their children either in their first year of life or in their mid-teens. When their youngest child Harriet Emily began showing signs that she, too, was succumbing to the illness, Henry consulted their physician, who suggested they should move to a healthier warmer clime such as Australia.

There was much advertising and promotion within England at that time, encouraging new settlers to migrate to Australia. The fact that his cousin George had made a new life for himself in Western Australia helped Henry in his decision. After selling his business and putting his affairs in order and leaving a substantial capital investment in England, the Burrows family, consisting of Henry, wife Annie, son John Henry, and daughters Evelyn Alice and Harriet Emily, left Tilbury on the Osterley on 31 January 1913, setting sail for Fremantle. Their eldest son, Frederick George Burrows, chose to remain in Britain, later joining the family in Harvey in 1916. The Burrows family arrived in Fremantle on the 4 March 1913, where they took up lodging with a Mrs Key in North Fremantle whilst Henry searched for a possible farming location and undertook research on farming areas in the State.

Henry was indeed a man of action, as after reading an advertisement in the West Australian for a property on Government Road in Harvey, he paid a brief visit to the area, where he sought the opinion of his cousin George Burrow. On Wednesday morning 12 March he caught the train to Perth, and at 3pm presented himself at the auction held by Robertson Bros., whereupon he bid £925 for the half of the Harvey property (250 acres), which included the house. He lost the bid and the property was passed in, but after some negotiation, a purchase was secured at £1000 for a property of 250 acres, which included a weatherboard dwelling. Henry soon set the wheels in motion, establishing the family on the farm and beginning the task of once again being a farmer. The remainder of the year was spent acquiring farm equipment, stock, household goods and all those items necessary to undertake both domestic and agricultural life. The railway was the main conduit by which goods arrived, and both the Cookernup siding and Harvey Station were frequented often.

At 60 years of age, Henry once again became a farmer, but in a completely different climate and environment. In fact, Henry’s venture in agriculture saw more debits than credits in his first year. The ensuing years saw much hard work and financial hardship, with the 250 acres gradually cleared, fenced and de-stumped, whilst ravaged by fire, pests and flood. Henry named his property ‘Prospect Farm’, and began with mixed farming. He planted oats, potatoes, fruit trees, wheat and mangles, and established a home vegetable garden. Livestock acquired were pigs, hens, dairy cows and horses. Most of his diary entries began ‘Fine day after fine night’, or something similar, with Henry mattocking, hoeing, building, ploughing, planting, digging up, harvesting, repairing, accounting for expenditure and corresponding.

The weather proved to be a difficult master to tame, with Henry having to accept a very dry period of the year where pastures and crops struggled and the earth so very hard to plough, while winters were so wet and the land so poorly drained, that culverts and drains had to be constructed to divert water away. Henry’s diary entries described it as, ‘all land a complete bog’. The unpredictable nature of the seasons and his lack of local knowledge caused the crops to be light, and oats looked starved.

The previous owner of the property called in for a visit and recommended that the farm was more suitable for dairying than anything else, with the price of a good well-bred bull about £10. Henry took his advice and began life as a dairy farmer. September saw the first payment towards his mortgage whilst in November it was Road Rates of £250 and Health Rates of 5/3.

Life for Annie and their daughters was equally difficult, in running a household without the facilities and services they had taken for granted in Worksop, such as sewerage systems and ready access to a water supply and gas. Usage of electricity was also becoming more common in England around the time of their departure, but the Uduc area at Harvey did not have electricity until 1957, long after both Henry and Annie had left this world!

However the family members embraced the Harvey community, especially that of Uduc, being closer in proximity to the farm. As regular church attendees, Sunday was the one day of rest and was put aside to visit not only the place of worship but friends and family such as George and Mary Burrows. John Henry Burrows continued working with his father on the land, as did Frederick George when he joined the family in Harvey.

Evelyn Alice Burrows was the one who had great difficulty adapting to life in Western Australia. Her life revolved around helping her mother in the house and on the farm, but after her mother’s death in 1935 her mental state suffered, with bouts of depression and delusion resulting. For someone who had experienced an earlier life in Nottinghamshire that revolved around music and society, it is understandable why she became so introverted. Her sister Harriet Emily on the other hand thrived in her new environment, which took her to Hartill’s Business College in Perth, working in the city and then marriage to Clifford Coleman and motherhood with four children. Their brother John Burrows continued working with his father until his marriage to Rosa Elizabeth Anne Montandon in 1928, whereupon they purchased land of their own and established a farm in the vicinity of River Road in Harvey.

The Great Depression left its imprint on the Burrows family, with Henry slipping further into debt as he lost stocks, shares and other investments left back in England, whilst John and Rose had no alternative but to walk off their farm. Annie Burrows had departed this world in 1935 after enduring the Depression years, leaving Henry, Frederick and Evelyn the sole remaining family members on ‘Prospect Farm’.

Henry continued to farm with his son Frederick until his death in 1941 as the result of a massive stroke. On Henry’s death, ‘Prospect Farm’ was sold to the Shaw family. Frederick continued to work as a farm hand for local farmers and then lived as a recluse in a hut on a local farm; John continued to live and work in Harvey, residing in Third Street with his wife Rose and daughter Shirley; Evelyn Alice was sent to a hospital in Perth for care and Harriet Emily lived with her husband and family in Perth.