The first Catholic Church in Harvey was consecrated and opened in 1932 by Archbishop Clune. Until then, visiting priests from other parishes held Mass in the Roads Board Hall. Father Fahey had served Harvey from Pinjarra and later Yarloop between 1909 and 1913, then Father McCabe travelled there from Yarloop until 1917. He was followed by Father Doddy from Dardanup, who was stationed at Yarloop for over 12 years. During that time the site for the Harvey church, school and convent was acquired. Father O’Grady, travelled from Dardanup to Harvey until 1932 when he was replaced by Father Lynch from Pinjarra who was attending when the Harvey Church was built. After he left, Father Lenihan became the visiting Priest and during his time there the Harvey Convent was erected and St. Anne’s School was opened.

It was obvious after the Church was opened that a Catholic school was needed to cater to the educational needs of Harvey’s Catholic children. The community of the Sisters of Mercy responded to the need and a disused dormitory from a boys’ boarding school in Bunbury was donated to fill the immediate need. That was dismantled, moved and set down in Young Street, Harvey to become the first St. Anne’s convent and school. Archbishop Prendiville, assisted by Harvey’s parish priest, Father Lenihan, officiated at the blessing and opening. In 1935 school began with 26 pupils. The number rose to 60 by the end of the year.

Sister M. Cecilia McNamara led that first community of Sisters of Mercy and she was supported originally by Sister M. Evangelist Angus and Sister M. Veronica Reid. Shortly after Sister M. Rita Spencer from nearby Mornington joined them.

Around 1937 newly arrived Italian children began attending the school. During the post war years increasing numbers of immigrants, many from Italy, arrived in the area. As the families merged into the population the demand for secondary schooling increased. Extra classrooms were needed, as over time children progressed through to Leaving Standard of education. Seven acres of land was purchased from Mr. L.R. Grieves, four new classrooms built and a Catholic High School was opened in 1964.

The old convent was replaced and a new one built in Hester Street in 1971. The following year a new church, named ‘Our Lady of the Immigrants’ was blessed and opened by Bishop McKeon.

At the instigation of Sister Margaret, the principal, a school board was formed in 1976 and its inaugural members were Dick O’Grady (Chairman), Doug Samuels (Treasurer), Marj Wragg (Secretary) with Sister Margaret (Principal), Father McGrath (Parish Priest) and Paul Egerton-Green as committee members. Their first aim was to build an administration room and this was accomplished with a lot of local help and work from committed parents and friends.

During the 1970s, it became obvious that school numbers were falling and the school was in crisis. To improve the situation it was decided to consolidate use of its amenities and move all the school buildings on to one site. Grants, donations, fundraising events and a lot of work made this possible. The re-sited and new school buildings were blessed and opened by Bishop Myles McKeon in 1978. In 1991, pre-primary classes opened there. The old buildings, church and school were sold to Harvey Shire Council in 1983 to become a community arts centre.

The first lay principal at St. Anne’s Harvey School was Shane Baker, appointed in 1985. Catholic education was changing and during the 50 years St. Anne’s had been open, a total of 78 or more Sisters of Mercy had served there, some through the difficult struggle of early years before funding and without pay. Some, who no longer taught at the school as lay teachers came in, stayed on in the Hester Street convent, serving the Parish in other ways. In 2005, many joined the celebration of St. Anne’s 70th anniversary.

Father Lenihan, the Parish Priest who helped establish the early St. Anne’s School and convent was followed by:–

Until Harvey became a separate parish in 1935 it was served as part of other parishes. Father Ryan was the first to serve the new Harvey parish which covered Harvey, Waroona, Yarloop, Mornington Mill, Hoffman Mill, Stirling Dam and Treesville. He lived permanently in a Presbytery in the town built in his time there. 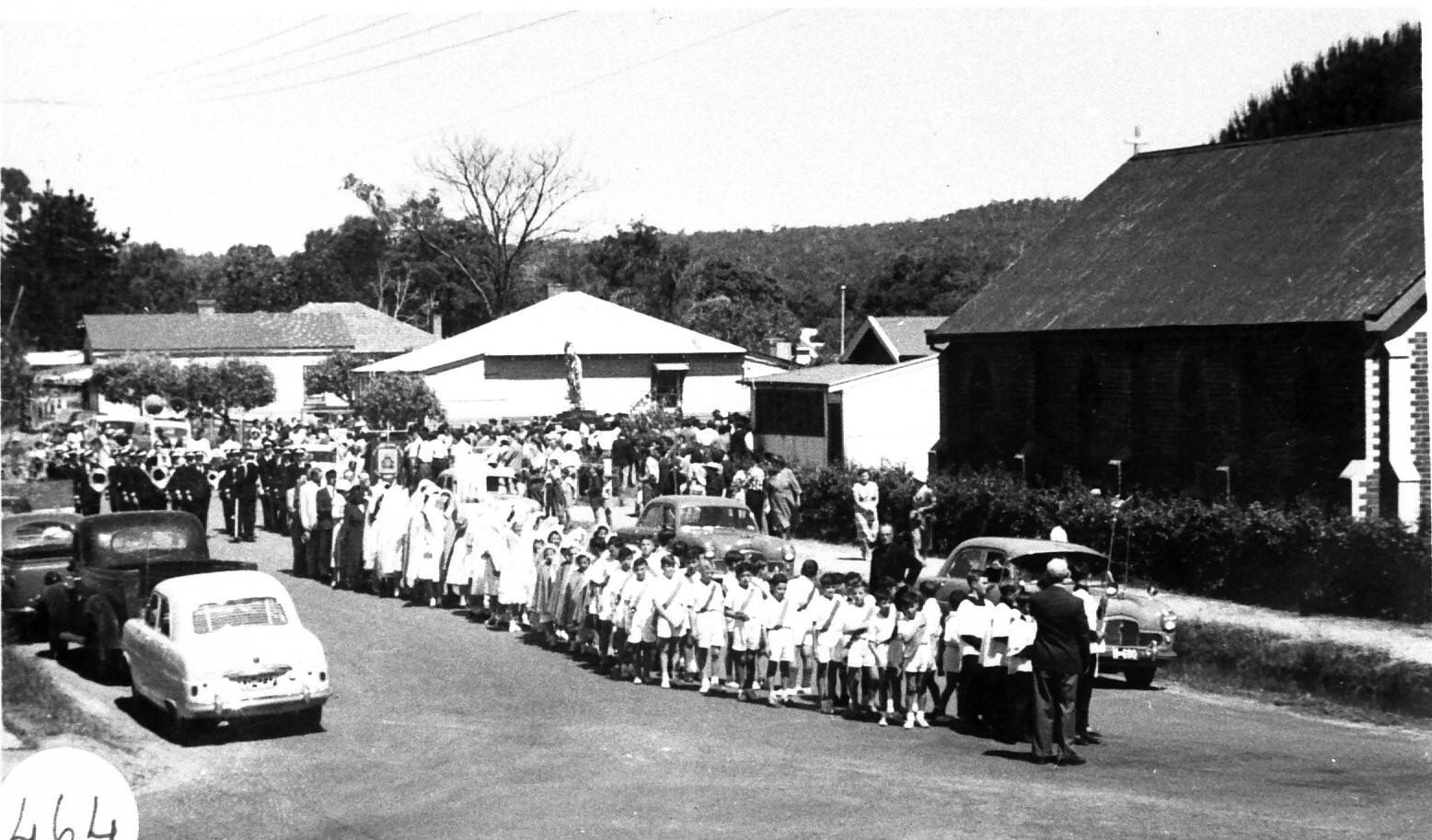 Festa March (the small building behind the church is St. Anne’s School)

(Notes taken from articles in the Harvey Reporter, written by Coralee Italiano and ‘A History of the Catholic Church, Harvey’, written by the Jubilee Committee in 1985.)