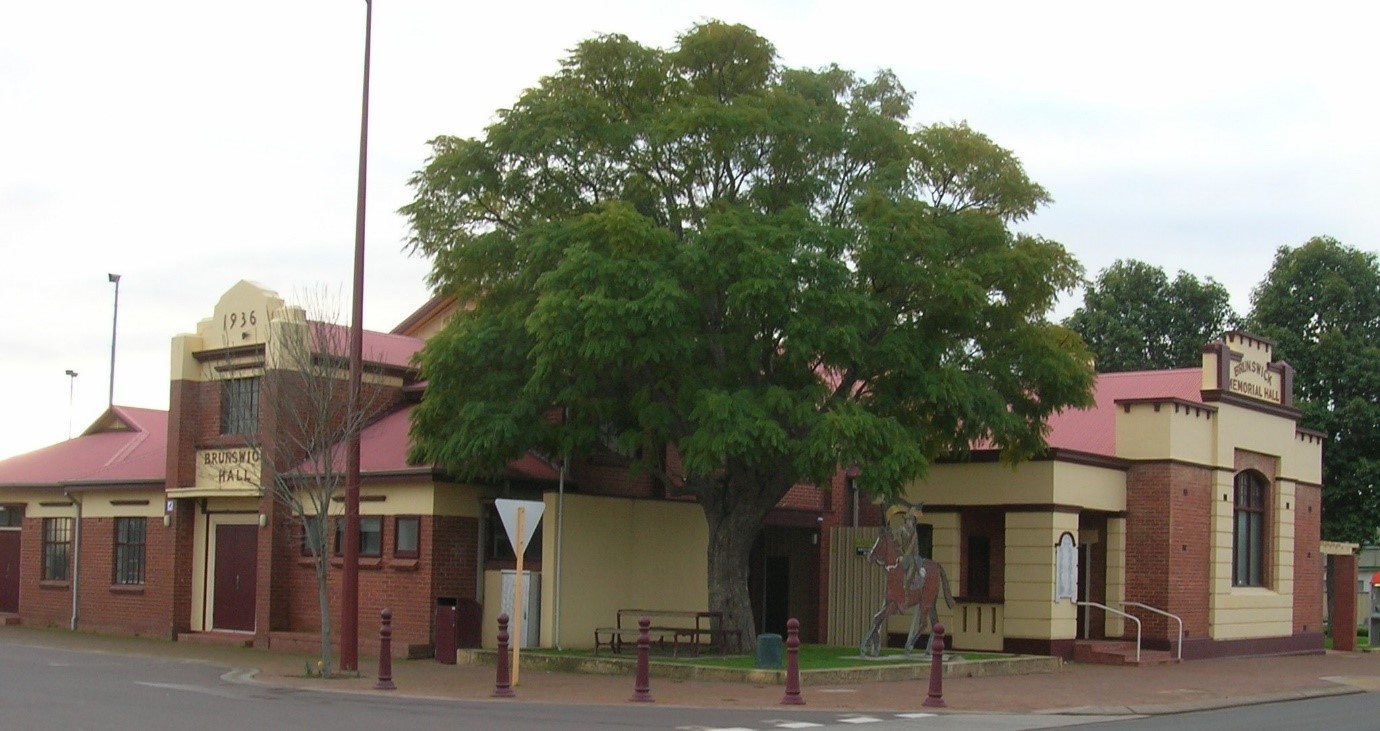 At the inaugural meeting of the Brunswick Farmers’ Association held at the Brunswick school on 5 April 1893, a motion was passed that the Member for the district the Hon. HW Venn be asked to obtain assistance from the Government to erect a public hall on the Brunswick.[1] Mr Venn replied to the Association by their second meeting held in July that he would take the first favourable opportunity to apply for a grant for the construction of an Agricultural Hall on the Brunswick but with the current state of the public finances it could not be done soon.[2]

However, in the Legislative Assembly on 19 September 1893 expenditure of £1,000 was passed for the building of agricultural and public halls at Brunswick, Dardanup, Greenhills (Northam) and Pingelly. Although there was some opposition, the Premier was in favour saying the expenditure was ‘necessary to cultivate social and political feeling in country areas.’[3] David Eedle, Chairman of the Brunswick Farmers’ Association, donated the land and Bunbury builders, Messrs J and H Gibbs won the tender for the Brunswick and Dardanup Halls.

A special train ran from Bunbury to celebrate the opening by the Hon. HW Venn on Wednesday, 7 March 1894. The hall was described as a commodious building, 40 feet x 24 feet, built of jarrah and lined inside. The entire building was erected at a cost of £246 with the addition of some small extras.[4] Venn handed the key to the Brunswick Farmers’ Association, the only representative body in the district, who were to maintain the hall. After the ceremony a dinner was held at which no political speeches were made. After dinner the tables were cleared and tea laid to which 100 sat down and a Ball was held in the evening.[5]

The Brunswick Road Board, formed in 1895, met in the Agricultural Hall and alternatively at the Mission Hall in Harvey until 1907 when meetings were held in Harvey.

People in the district wanted to erect some edifice to commemorate the men of Brunswick who had served during the First World War. Brunswick was growing and the hall had become too small so it was a choice of enlarging the present building or erecting a new one. A suitable means of paying tribute and also overcoming the question of space in regard to the present hall was to enlarge it by building a handsome brick-fronted building and dedicating it to the memory of those who had volunteered from the Brunswick District.[6] Once sufficient funds were raised by the public, Algernon Clifton, the Honorary Secretary of the Brunswick Memorial Hall committee, advertised through the newspapers called for ‘the names of those men who left Brunswick, Roelands, Benger and Australind during the fateful years 1914-1918 to serve in the AIF’[7] so the names could be placed on a granite slab on the outer wall of the building [see below for names]. A brick front, 30 feet x 27 feet facing Ommaney Road, was added to the existing Agricultural Hall[8] which was officially opened by General Sir Talbot Hobbs on Wednesday, 24 November 1926. Mr WJ George, MLA, opened the door with a golden key made for the occasion. To mark the occasion an afternoon tea was served and a dance held at night. Before the opening ceremony an unofficial luncheon took place at the Brunswick Hotel.

The final stage of the hall was completed after the original wooden building was demolished and replaced by the main hall, 67 feet x 40 feet, with a commodious supper room and kitchen attached facing Ridley Street. The brick front built in 1926 was incorporated into the new building. Harvey Roads Board paid for the extension at a cost of £3,250 using the well-known architects Cameron, Powell and Chisholm with Harvey builder, Mr Joseph Jackson. The Lieutenant Governor, Sir James Mitchell opened the building on 22 July 1936 and he and Lady Mitchell attended a dinner given by the Road Board to the members of the Brunswick Hall Building Committee.[9] A Ball followed the opening with about 300 people present.[10] 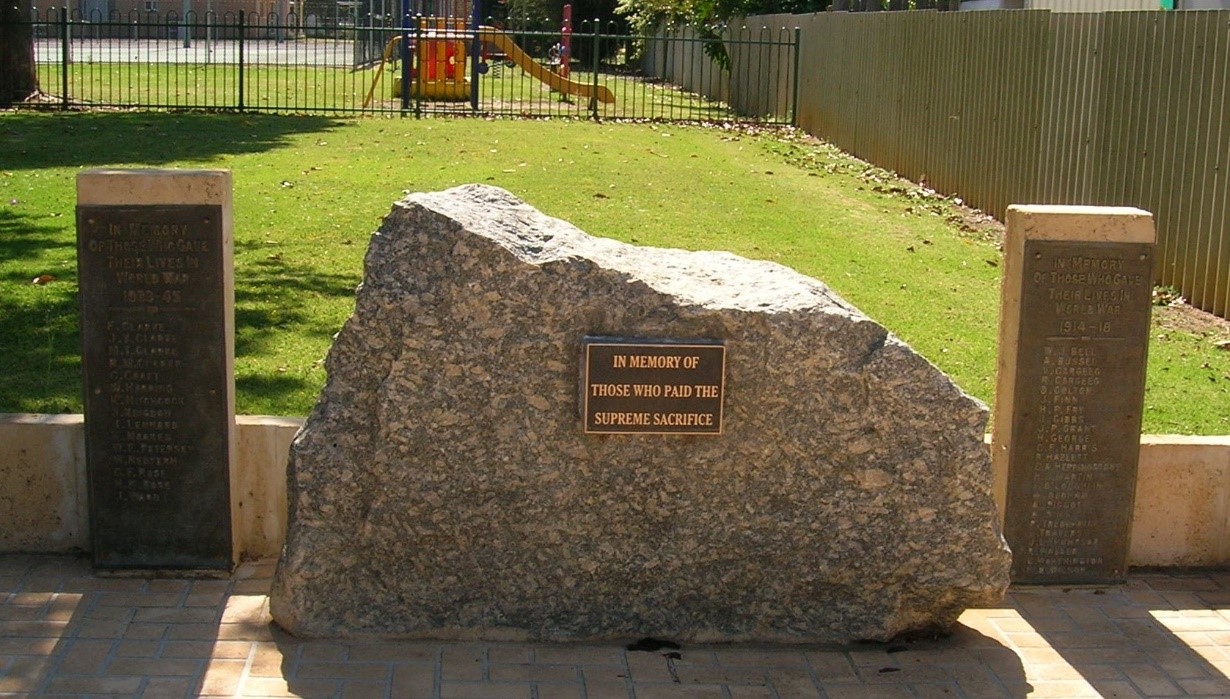 Memorial to those who paid the supreme sacrifice during both wars.

A grant from Veterans’ Affairs, a generous donation from local man, Roger Edwards, and materials and labour from Brunswick Lions Club members culminated in the mosaic of a ‘10th Light Horse Regiment trooper on horseback’ installed outside the Brunswick Memorial Hall.[11] Roger Edwards and former troopers who served with the 10th Light Horse during World War 2 were guests of honour at the unveiling on 26 May 2013. 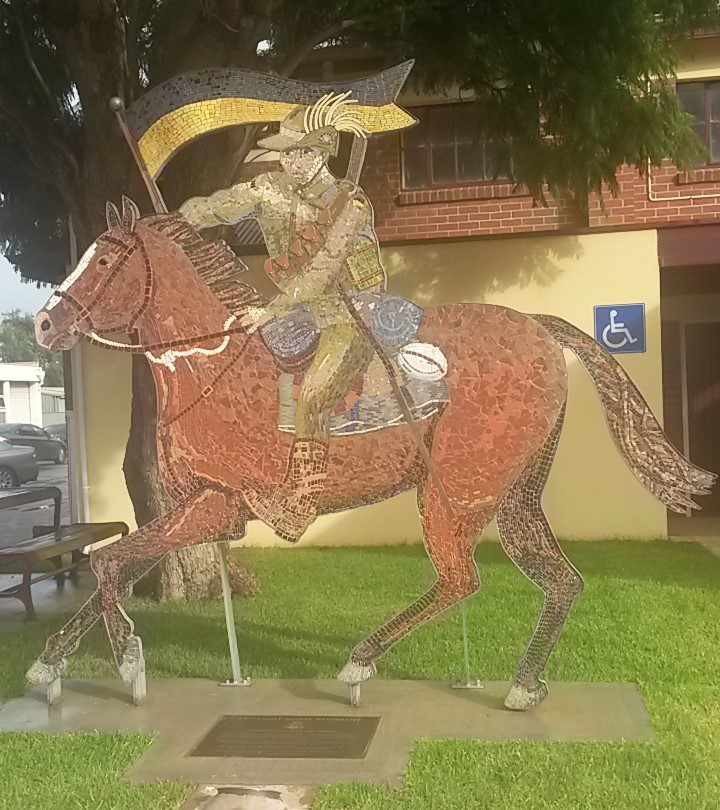 On 24 February 2015 Brunswick Self Help Group Inc. honoured 13 World War 1 soldiers who named Brunswick Junction as their current address when enlisting and were killed during the conflict. Judy Talbot had great difficulty trying to locate relatives of the deceased soldiers and she believes that some were working at a timber mill in Beela Valley, others on the Brunswick Railways and others at a timber mill at Roelands. As Australind does not have a War Memorial, Leonard Travers was included. 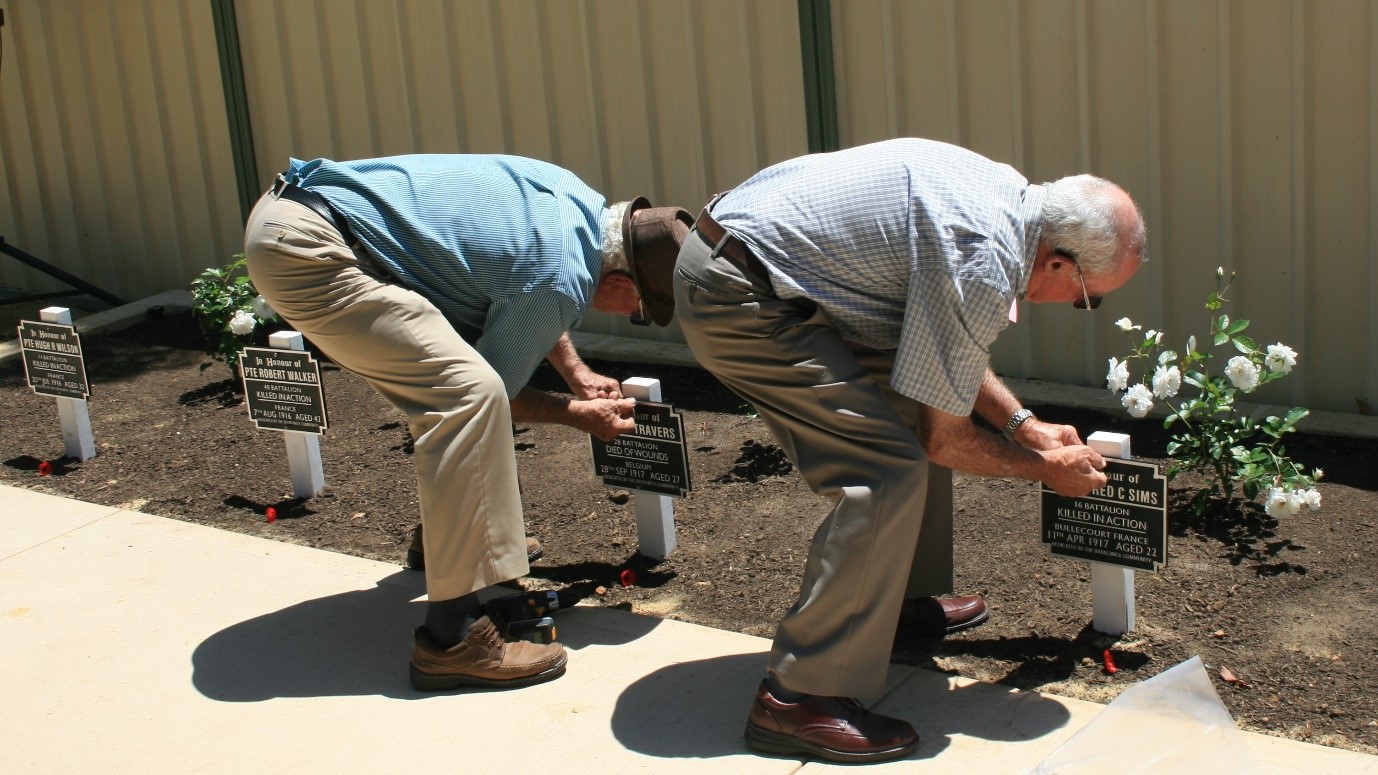 Fred Talbot and Gerald Fry put the finishing touches to the plaques.

Dedicated by the Brunswick Community, 24 February 2015.

ON A LIGHTER NOTE –

He shall keep the hall clean and tidy and also the premises of the Association.

He shall empty the closet when necessary.

He shall chip the grass off round the building, and keep all rubbish clear of a distance of six feet.

He shall clean and trim the lamps.

He shall scrub the hall when required for the sum of 5/- (five shillings).

The boards of the stage shall be stacked on the verandah when the stage is not required.

The caretaker shall be at all times under the direction of the secretary as to the arrangements of the hall.

I the undersigned hereby undertake to perform the duties as set out in the above schedule for the sum of six pounds ten shillings (£6/10/-) per annum payable quarterly, and five shillings (5/-) extra on each occasion that I have to scrub out the building.

Signed this sixth day of March 1900