Turkey Point, so called because of the wild turkeys that once roamed there, originally formed part of the Prinsep Estate, established in 1839 by Charles Prinsep. ‘Belvidere’ occupied the length of the peninsula, 1,832 acres, between the Leschenault Estuary and the Indian Ocean. It was later sold to W.H.Venn in 1877, and some years later, twenty acres of it was acquired by Englebert Springman.

He built a house and a small farm but began transporting locals on his motor launch, ‘Yorke’, to a ‘bush-house’ in his front garden where visitors could purchase tea and homemade cakes prepared by Gertrude, his wife. Around the same time, he invited friends to camp there or stay in one of the two old cottages, which were on the property when he bought it.

In 1918 Thomas Walters, purchased the property, and began a demolition and rebuilding programme. He built the first row of Turkey Point’s chalets with trellised walls and roofs thatched with rushes. Walters upgraded the homestead, added a shop, built a houseboat, and timber frames for canvas tents. Most notably he built an impressive latticed pavilion, which became the new tearooms which also featured a dance floor; behind this, he added a large billiard room, two tennis courts and a skittle alley. He also built a soft drink factory and installed his own electricity generating plant, in the form of a carbide system, and planted a variety of palm trees, some of which still survive. Walters also purchased John McKernon’s complete boat hire business and another passenger vessel the Etta. In 1920 Thomas Walters sold the business to his friend, J. J. Lyons, who built another row of holiday chalets, making a total of nearly twenty, and added another boat to the fleet, the Swallow.

The resort became a very popular venue for annual summer camps, community and church groups, and for picnics by local associations, such as the Lumpers Union. Regular dance and fancy dress parties, gala nights and concerts, took place at the pavilion.

At the end of 1930, Mrs Lyons relinquished control of Turkey Point, to Jack Walters, son of Thomas Walters. He sold it after only four years to T.P. Chadd, well known for his shop called the ‘Red Mill Store’, in Stirling Street. It was during this time that the Swan River launch Valdemar began transporting passengers to Turkey Point. A Mrs Caesar owned it briefly before selling it in 1948 to Alan Main. With his wife Olive, they made improvements to the facilities at Turkey Point including a high diving board and enclosed swimming area. ‘Harvey and Collie were great supporters because the miners had two three-week periods of holidays and as one lot went out the others came in’ remembers Alan. In 1951 ‘The Cut’ was created in an attempt to alleviate silting in the estuary and, by 1954, the State Electricity Company, began building a coal-fired power station nearby. Alan’s efforts to keep the resort operating in the midst of this industrial expansion were to no avail, and by 1958, he had to leave. ‘We loved the place,’ he reflects, ‘we sold what we could, it was traumatic.’ By 1960 Turkey Point Holiday Camp and Tearooms had been demolished.

The full article ‘The holiday camp at Turkey Point’, was published in Early Days: Journal of the Royal Western Australian Historical Society, Volume 12 part 5, pp. 522-539 in 2005 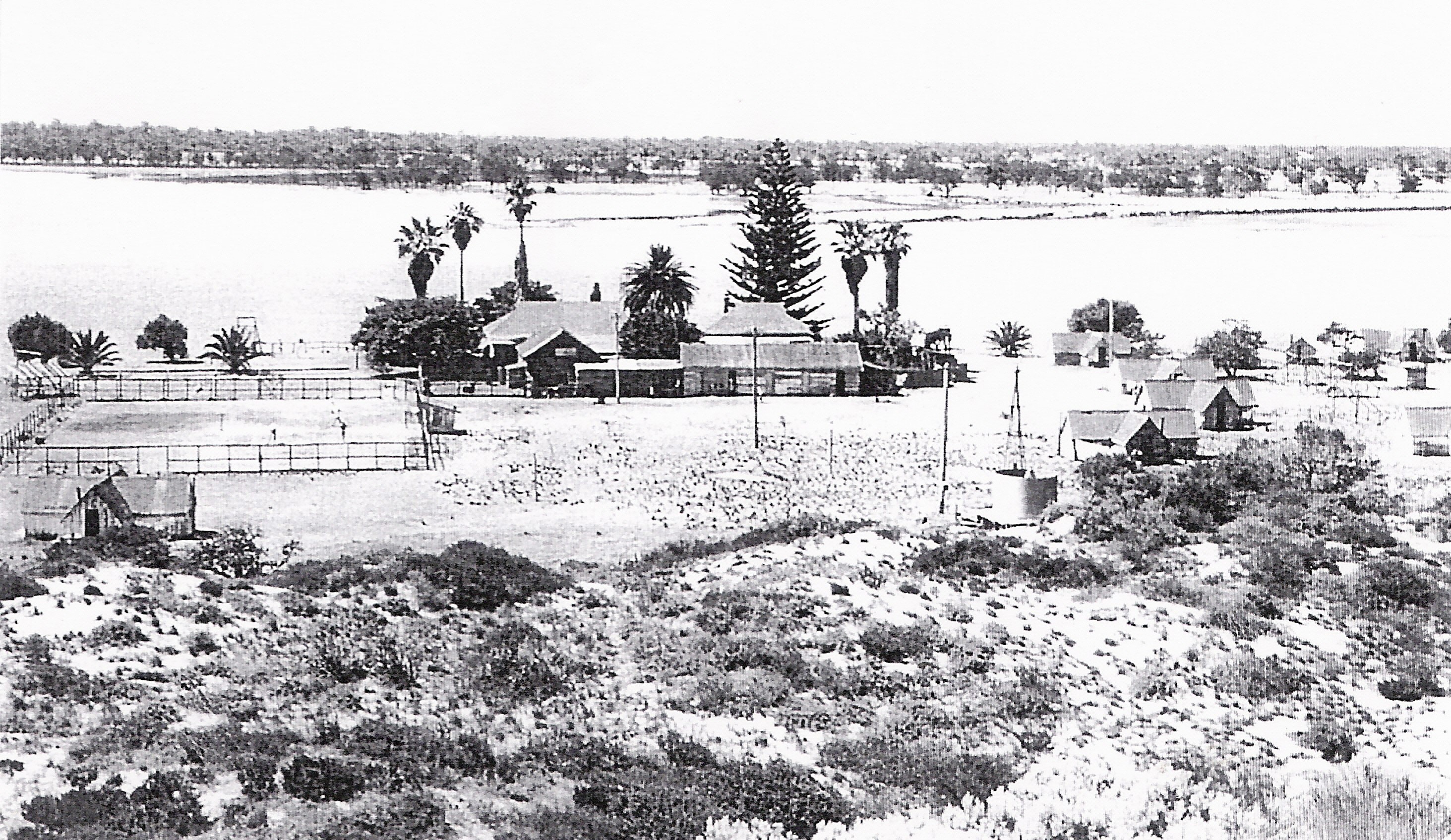 Turkey Point in the 1950s. A view from the sandhills, showing the tennis courts behind the pavilion; some of the chalets and timber frames for the tents can also be seen.

Reproduced courtesy of the ‘Bunbury… I remember when…’ Committee via Ray Repacholi.