In just over a week after the declaration of the end of the Second World War, Royal Navy submariners docked at Bunbury and were enthusiastically entertained throughout the region. The same article published in both the ‘Harvey Murray Times’ and ‘South Western Times’ on 20 September 1945 described the events in patriotic and lighthearted tones, now that the dark days of the War were over.

Harvey played its part in the day’s activities and locals took photos as a record of the day – two of them are included below.

“WE’RE SAYING GOODBYE TO THEM ALL!”

They came and they have gone, after a visit to Bunbury which was all too brief.

On Tuesday morning of last week we saw for the first time submarines of the Royal Navy entering our harbor – high winds and heavy seas rolled and tossed them while we wondered just what it would be like in the confined quarters when the lads were about their routine jobs.

Long, narrow, deadly-looking weapons of modern warfare, which had “gone places” and done things, manned by youthful veterans who had fought and won the vital battle of the seas.

As they drew closer, flying the Jolly Roger, bearing the emblems of many well-won victories, the breaking out of the White Ensign could not fail to give an upsurge of pride and gratitude for all that it has meant to us.

We remembered Greece, and Crete, our own Rats of Tobruk, the shot down airmen and the aid these boats brought when no other aid was possible.  The battle of Malta and the “Med.” from which only a very few remained.  We thought of the many dear friends we had made amongst the boys of the “Trenchant,” the “Thule,” “Tradewind,” “Totem” and many others famous in Pacific operations, and sadly of the fine lads who first visited us from the “Porpoise” and did not return, who are a sorrowful memory of the price the R.N. have paid for the security of the Empire.

Those who have had the pleasure and honour of having the boys in their homes so many times, were indeed grateful to be able to see at last the boats of which they had heard so much – in many a Bunbury home these British boys have taken a vacant place of a son in distant battlefields; to the anxious mothers they have been an outlet for the long denied care and the brightness of lads about the house.

The “Thorough” and the “Stubborn” although not so well known in Bunbury as other subs, found us with just the same sort of boys.  We asked of Tom and Dick and Harry, we learnt of comings and goings – they all know of each other by some “buzz” which recall all the strange foreign ports where sailors meet and where Bunbury is not now unknown.  In the short period of their stay it was our desire that they should not only know Bunbury, but that they should see something of our South-West, its conditions and possibilities, and so we took them to –

HARVEY It is the “drill” that when anything is wanted at this prosperous happy centre, you see Jack Lowe, and when this is done, not far away will be Aubrey Smith and Roy Eckersley.  Jack waves his hand and says “Leave it to us,” and promptly sees Mrs Spurge and the Harvey ladies, and just as promptly leaves the major portion of the day’s work to them (we know, because that is what we do in Bunbury).  So on Wednesday last when the boys arrived everything was found to be teed up and an enjoyable, interesting non-stop programme arranged.  The first stop and a very important one was at the C.W.A. rooms when Jack in his own inimitable way soon put the lads at home and lavishly provided an essential and badly needed prelude for the more serious things.

To the Co-operative Coy’s cheese and condensed milk factory, from where it was hard to tear the interested party from the hands of factory manager Mickle and factory employees – here they saw the milk turned into cheese in modern hygienic conditions, sampled to repletion the finished product, drank huge quantities of butter milk, filled, tinned and sealed their own Sunny West condensed milk and took it away to be cherished until they reached “Blighty”.  Thence the party split; one to Aubrey Smith’s orchard where over the intriguing sounds of sucked oranges, Aubrey could be heard delivering a vigorous immigration speech extolling the potentialities of Australia,  W.A. and Harvey in particular.  The second party went to Mrs Percy Dewe, a happy little lady who had just heard that hubby Percy (well-known ex-Bunbury golfer) had terminated his residence with the Nips and was safe in Bangkok.

The latter party visited the farm of Mr. F. Byrd and were told the story of the owner coming from England without capital, of the little holding of 10 acres that has now increased to a flourishing 700 acres of citrus fruits, dairying and grazing.  An immigration story without words.  The other party to Mr Holthouse’s dairy farm – a one-man job showing careful and scientific planning, complete with all modern appliances, which in 12 years has turned 80 acres of virgin country into beautiful permanent pastures carrying a high producing herd.  We would have liked to spend a lot more time at this attractive home but had to cheer and wave goodbye to the little lady who held the interested attention of several farmer sailors.

The Ladies – Back to the R.S.L. Hall where all the beauty of the district had congregated to participate in extending that Harvey hospitality which is famous, the boys stared in amazement at the sight of an Australian country idea of a light lunch – a little chap opposite looking at the turkey and ham laden plate murmured wistfully “about a week’s ration for the folk at home”.  Apparently the ladies had estimated that the appetite of the sub men, cooped up in their crowded quarters, would be equal to that of their own open air men folk and expressed disappointment that the great array of cream decked cakes had not been disposed of, but even the rugged hearts of oak that could push into Togo’s front yard quailed at the task.  However, not to be defeated, large boxes were carted away and by now have gone to the destination desired.

Jack Lowe said all the right things in the right way in proposing the toast of the Royal Navy; in asking Mrs Spurge to support, he paid a glowing tribute to her and the ladies of Harvey for continuous energy in the local war effort, and on that lady rising the enthusiastic reception proved that Jack had been justified in his eulogistic remarks.  A visiting member of this paper said his piece also, and the Chief P.O. responded in the best traditions of the Silent Navy.

A little talk, a lot of laughter and after a look at the Road Board Hall where Aubrey and Jack described the old identities, the past, present and future of the district, the buses pulled away to a full-throated chorus of “Wish Me Luck As You Wave Me Goodbye”.  Harvey did and does! 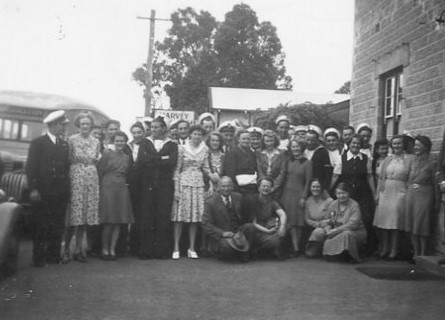 Submariners and Harvey ladies outside the Harvey RSL Hall. The gentleman kneeling is thought to be Jack Lowe. Photo courtesy of Ruth Belben via Harvey History Online Facebook. 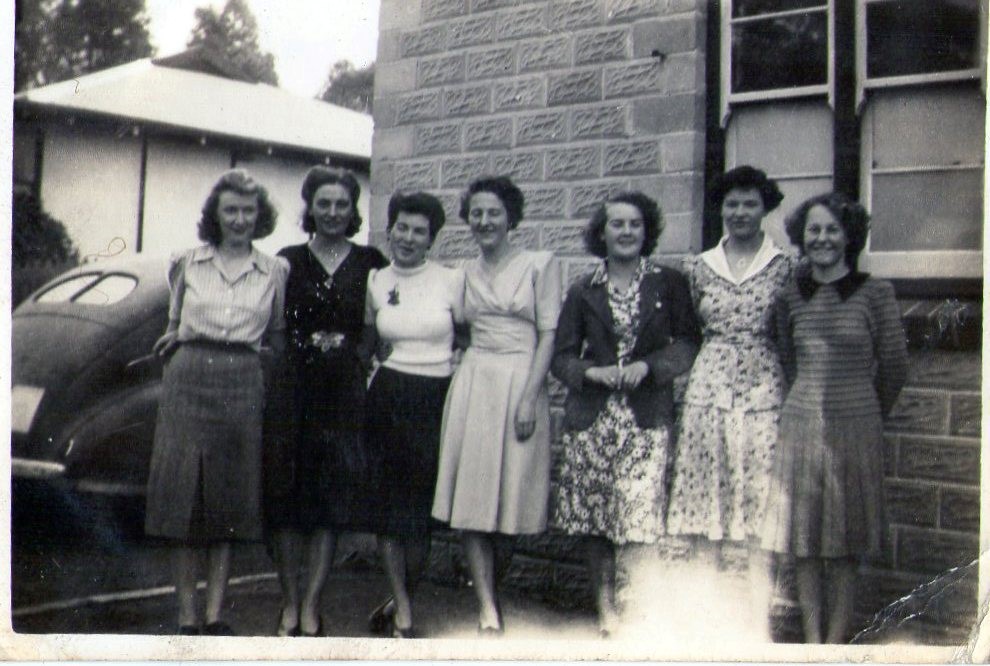 BUNBURY Home again, and Bunbury has often been “home” to the lads, a dance at the R.S.L. Hall; picture theatre (Ron Elsegood made it an open house for the R.N., during the whole of their stay—good show, Ron!); a little sleep and the next morning to

HIGHLAND VALLEY Out to the beautiful hills where rabbits are plentiful went the boys armed with everything except the ships’ big guns. Soon the peaceful scene became reminiscent of a landing on an island beach, kangaroos, rabbits and all game took huge leaps into the wilds of the bush and were last heard of approaching Darwin, but not without some slaughter, one rabbit having been struck by a barrage, the remnants carefully gathered up and divided amongst the numerous self condemned killers. Huge stacks of luscious lamb chops grilled to a turn on the open fires, lots of bread and “margarine” (for Frank Anderson’s benefit) washed down by copious supplies of billy tea provided the right thing for a typical Australian picnic.

Back to the civic reception where good cheer and good “cheer” was turned on by the Mayor (Mr. P. C. Payne), leaving only time for a brush up and on to the big Ball. They and we had “had it”; Friday was spent, or what was left of it, in the Bunbury homes where our new friends had become old friends, where greetings of “sailor” or P.O. had changed to Bill, or Skinny, or Jack, when Lieut-Commanders became Arthur and Bertie, and five lieutenants were helping Mum to dry the dishes. Apart from these activities, parties abounded, sailors had to divide their evenings as much as possible and we have been a joyous town. On Saturday morning many attended to see the subs pull out. Gone was all the informality and freedom of the past days, replaced by the dignity and discipline of the Royal Navy. Officers at stations, crews dressing decks at attention while we waved and said goodbye knowing that no longer will they have to face the perils and discomforts of war but are on their way to their homes and families, where we hope their visit to Bunbury will be remembered.