Henry Moult, aged 24, private in the 17th Regiment, was found guilty of larceny as a servant at the County Sessions at Maidstone, Kent on 16 October 1849 and was sentenced to a term of ten years’ transportation. His accomplice John Humphrey was found not guilty and acquitted.[1] 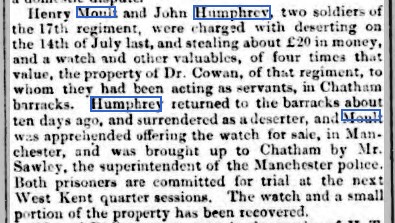 He was visited by his brother-in-law from Maidstone while in Millbank Prison. On 31 December 1850 he was transferred to Portland Prison.[2] In the 1851 Census he was listed as a prisoner there, as a labourer, aged 26, born at Derby, in Derbyshire.[3]

Henry arrived at Fremantle on the convict ship Pyrenees (2nd voyage) on 30 April 1853. His description was – labourer, single, aged 31, 5’7½”, brown hair, hazel eyes, with a long face, sallow complexion of slight build, and no marks.[4]

Information about Moult is sparse. He received his Ticket of Leave soon after arrival, on 1 May 1853, and his Conditional Pardon on 27 January 1855.[5]

There is a very brief mention of Henry Moult in the journal of Marshall Waller Clifton of Australind that year, which indicates that Moult was briefly in his employ. On 1 December 1855 Clifton wrote – ‘Stormy & windy, but beautiful hot Day. Breakfasted at Pearce’s and Ellen & I rode up. Gervase had slept in & as I found that the Horsebreaker & Moult had improperly ridden Horses without Authority I turned them away & Goodall also. Gervase went out to Rosamel to carry these orders into execution. I sent French into Bunbury. The Governor & Party with Eliot went to the Vasse.’[6]

It seems likely that Henry Moult left the Colony as soon as he was able.