Henry Huggett was sentenced at Rochester in Kent on 27 December 1851 for larceny. He was transported for 10 years, due to having a previous conviction for larceny at Maidstone, Kent, on 14 October 1851, which had resulted in a sentence of six weeks.[1] 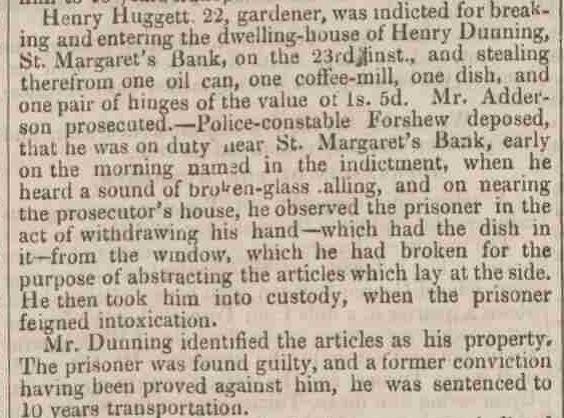 On 18 July 1855 Huggett arrived at Fremantle on board the Adelaide, described as a bargeman, single, 5’3” tall, with brown hair, grey eyes, oval face, sallow complexion and middling stout. His distinguishing marks were a fish, two anchors, initials ‘MFSJ’, a harpoon and tobacco pipe on his left arm, and ‘HH’ on his right arm.

He was out on ticket-of-leave in November 1855 when arrested for drunkenness in Perth and was fined 5/-.[2] His convict record is sparse, probably indicating general good behaviour:

The journals of Marshall Waller Clifton of Australind tell us a little more of Huggett’s work record:

3 January 1860 – Sent Huggett down to play the Fiddle (at the wedding of Miss Hill and Mr Ramsay).

No more details of Henry Huggett’s life in Western Australia over the next ten years have been found. It appears that he worked hard and kept out of trouble, with the aim of going home to England. On 30 January 1871, he sailed for London on the Hastings, in steerage.[9]