The Harvey Citrus Society, formed in 1904, held its inaugural Fruit Show in August 1905. It was opened by Mr TH Bath, Minister for Lands and was an important day for Harvey – not only was it the Society’s first show but the first Citrus Exhibition held in the State. The attendance of about three to four hundred people was regarded as a great success.

The following 1905 article has the names of many residents in the Harvey district at the time, engaged in organising and running the event, as well as the prize winners – often one and the same. The variety of exhibits showcased what was being grown and raised in the area, and the ‘Industrial’ category brought in the women-folk, while children weren’t totally forgotten, with prizes for handwriting and sewing.

Class A Citrus Fruits, Class B Fresh Fruits, and Class D, Flowers, were adjudicated by Mr. J. Hawter, who also judged the Best Collection of Citrus Fruits for a prize of £2 10s. donated by himself.

The stewards were Messrs. Christison and Leitch (Miscellaneous), Newell and Jenkins (Citrus), Berry and Beecher (Fresh Fruits) … and Sharpe (Poultry), Fisher and Handley (Vegetables), and Gibbs and Logue (Flowers).

The prize winners were as under:

Mr. Hawter experienced great difficulty in coming to a decision, so excellent were all the exhibits.

Collection of Roses.—Newell and Christison, 1.

Mr. O. Rath, Sunnyhurst, white horns, winners of the Roseworthy laying competition were also on exhibit but not competing.

The special prize of £5 5s. for the most worthy exhibit shown by a resident settler on the Harvey Estate, was easily won by Mr. Christison.

Under the auspices of the Harvey-Anglican Church Women’s Guild (which has only been in existence 3 months), stalls were provided for the sale of home-made sweets, refreshment, fruit, etc., and also fancy work, of which there was an artistic variety.[1] 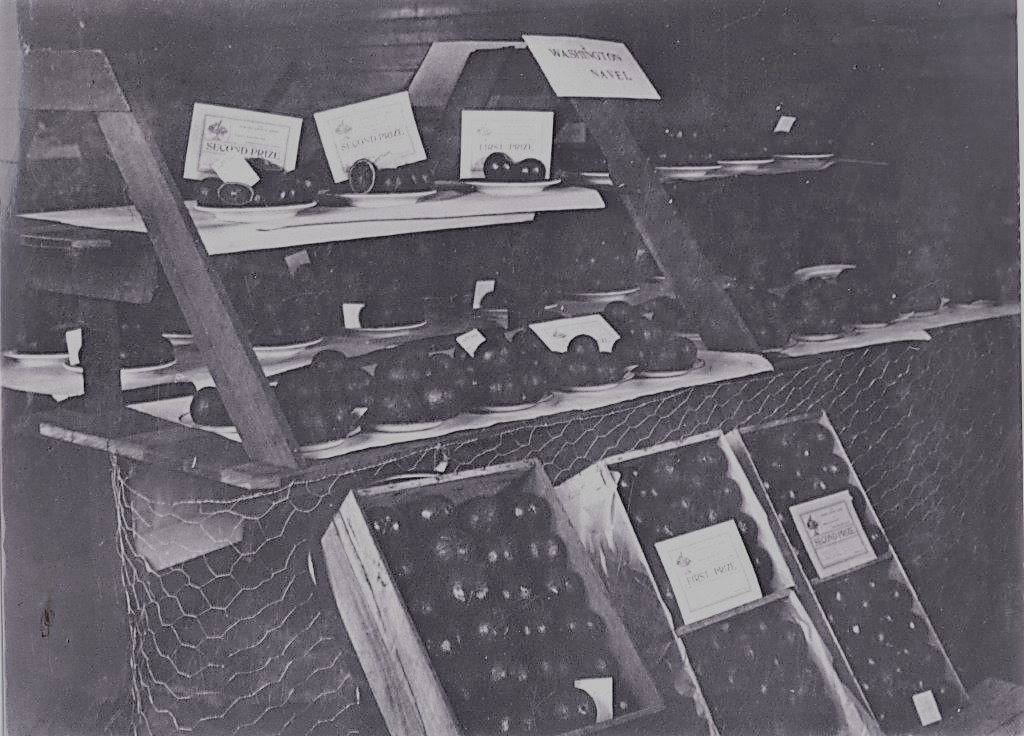 The Show was heavily advertised in the South Western Times in 1906 and excursion tickets from Pinjarra, Bridgetown, Bunbury and intermediate stations were made available to encourage attendance.[2]

The popularity of the Citrus Society’s Shows continued, with day-trippers from Perth offered tours of the district orchards and out to the weir.

Show displays were held in the Agricultural Hall and a tent until the Town Hall opened in 1914. Photo from Federation Display, courtesy Harvey Districts Historical Society.

During the war years local growers were struggling to overcome problems caused by a seriously depleted labour force. Despite this, the Citrus Society continued to host an annual show up until 1918, when they reported visitor numbers of more than 800.

This was to be their last show, however. Their energetic young Chairman, John Grieves, had passed away at the age of 34 years just weeks before the 1918 event. In 1919 it was announced with regret that there would be no annual show that year. Reasons given were public concerns over the pneumonic influenza epidemic brought back to WA by returning troops, as well as the shortage of volunteers to assist the ageing members with the necessary work involved.

However, the people of Harvey were determined to resurrect their local show, realising its value as a community event, as well as an opportunity to promote their local produce. In 1920, the newly-formed Harvey Agricultural Society, under the leadership of President J Lowe, staged its first annual Harvey Agricultural Show on a bright October day, with an attendance of around 900 people. The expanded range of products on display reflected the district’s gradual transition away from orcharding towards dairying and its allied industries, as well as sheep raising and cereal growing.

The Harvey Agricultural Show, followed by a Ball at night, became an annual fixture. The shows continued in the early war years, with log-chopping a feature of the 1939 event.

In 1940 Premier Sir James Mitchell urged local communities to keep their shows going during the war years.[3] In that year Harvey confined its exhibition to the hall, where flowers, fruits, produce and handicrafts were on display, and a programme of novelty ring events was held on the recreation ground. An auction sale of farm implements and stock, donated to the society, was also held on the recreation ground. Proceeds amounting to around £200 went to patriotic funds.

In 1941 the Committee decided that due to wartime petrol rationing, it would be unwise to hold a full show. Instead they restricted the event to a ball show and a programme of ring events, similar to that held in 1940.[4]

There is no record of Harvey holding agricultural shows during the remainder of the war years. Once the war was over, however, the people of Harvey wasted no time in reinstating their annual Agricultural Show, with record attendances and entries reported in 1946:

Harvey’s 37th annual show, the first since 1939, was held on Saturday, the attendance and entries breaking all previous records. All stock sections and the hall exhibits were of a high standard, particularly the flower section which the judge said was better than any he had seen in the State. A feature of the flower section was the S. W. Rose Challenge Cup for roses, which was won by Mrs. Jessie Craig, of Jarrahdale. The show was officially opened during the afternoon by the Lieutenant-Governor (Sir James Mitchell), who was accompanied by Lady Mitchell. Sir James was also present at the show ball at night which was attended by over 700 people.[5]

With dwindling numbers and an inability to attract side show events, the society changed its timing from October to April in 2008. The change was a great success and once again, the show has become a popular event.